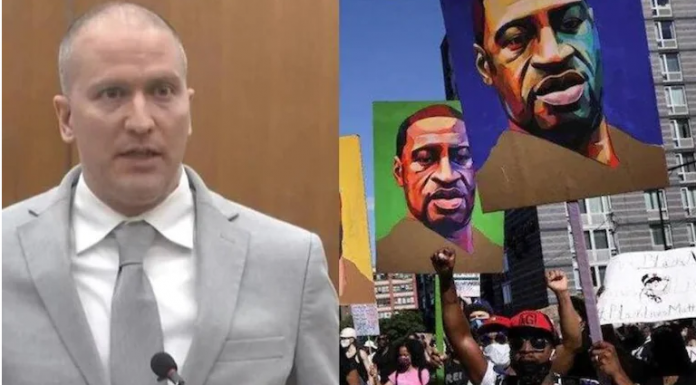 American former police officer, Derek Chauvin on Saturday was sentenced to 22 and a half years in jail for killing African American George Floyd, which sparked a massive protest in the United States for racial justice in decades.

Minneapolis court Judge, Peter Cahill while announcing the punishment said, Chauvin’s punishment is not based on any emotion, sympathy, or public opinion, the punishment is purely given on a basis of crime which accused has committed in the past.

Cahill said, after completing two-thirds of his sentence, or about 15 years, the police team will record Chauvin’s behavior, if it remains good, then he could be out on parole.

Prosecutor Matthew Frank asked the judge to increase the accused’s punishment sentence, frank said Chauvin should be given more than 30 years in prison, saying torture is the right word for what the officer did to Floyd.

Floyd’s family members expressed sorrow about his death and they asked the judge to give the accused the maximum penalty.

Floyd’s brothers, Terrence Floyd with tearful eyes said, his family already been through so much after the death of his brother, we want to see no more slaps on the wrist, Terrence said.

Floyd’s nephew Brandon Williams said, their family still in pain and it is broken forever. Floyd’s 7-year-old daughter, Gianna, in a video that was played in the court, said if she could say something to her father at the moment, she said she would say she loves her father and always misses him.

Joseph Allen, 31, a Black man, Chauvin needs to get a life sentence, he wants other police officers should take a lesson from it not to commit a crime as Derek Chauvin did.

Chauvin was convicted of second-degree unintentional murder, third-degree murder and second-degree manslaughter for pressing his knee against Floyd’s neck for up to 9 1/2 minutes as the 46-year-old Black man gasped for life and got dead.