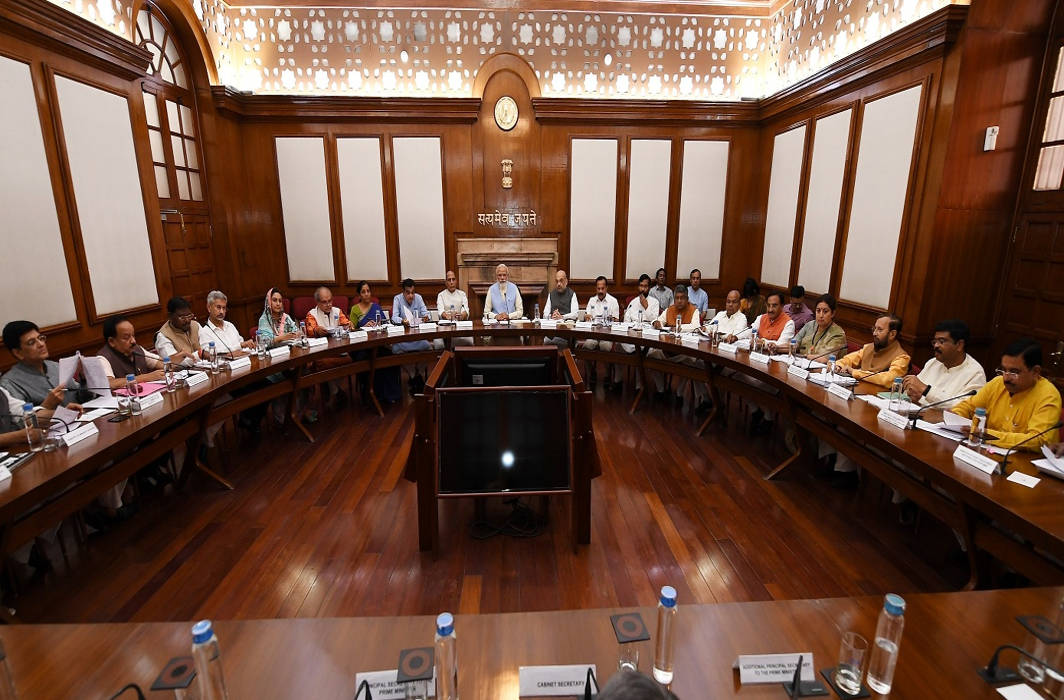 Extending PM-KISAN scheme of Rs 6000 annual income support to all farmers, pension scheme for small and marginal farmers, retailers, traders and the self-employed, and a hike in scholarships to widows and wards of dead or ex-service personnel of armed and paramilitary forces: these were the highlights of a number of decisions taken at the first Cabinet meeting held yesterday (Friday, May 31), just a day after the Narendra Modi government was sworn-in for a second term.

Following the Cabinet meeting, Prime Minister Narendra Modi, in a tweet, hailed the decisions taken by the new Cabinet and said that the initiatives will help the hardworking farmers and industrious traders of the country.

Glad that path-breaking decisions were taken in the Cabinet, the first in this tenure. Hardworking farmers and industrious traders will benefit greatly due to these decisions.

The decisions will enhance dignity and empowerment of several Indians. pic.twitter.com/U9JTXeyoVm

The Pradhan Mantri KisanSamman Nidhi (PM-KISAN) scheme, announced ahead of the Lok Sabha elections in the Interim Budget this February, provided foran annual income support of Rs 6,000 in three instalments of Rs 2,000 each every four months — to small and marginal farmers, who owned 2 hectares or less.

The scheme was introduced – unusually – as a retrospective scheme, starting from December 1, 2018, which the government could use to argue makes it an ongoing scheme. The first instalment was handed over to farmers in February.

The Cabinet decision yesterday will increase the number of beneficiaries to 14.5 crore from 12.5 crore earlier, and will cost the government an additional Rs 12,000 crore. The total cost to the exchequer in 2019-20 under the PM-KISAN scheme is now estimated to be Rs 87,217.50 crore.

Calling them “landmark decisions in the very first meeting of the new Cabinet” Union Minister for Information and Broadcasting, and Environment, Forest and Climate Change Prakash Javadekar said, “Jo wadakiyauskaamalaaj se shuruhua (we have started delivering on the promises made)”.

The cabinet also approved a new central sector scheme called the Pradhan Mantri Kisan Pension Yojana which is a voluntary and contributory pension scheme for small and marginal farmers across the country.

“The central government will contribute to the pension fund in equal amount as contributed by the farmer,” Union Minister of Agriculture and Farmer Welfare, Narendra Singh Tomar announced after the cabinet meeting.

“The scheme provides income support to small and marginal landholder farmer families with cultivable land holding up to 2 hectare, across the country, by way of Rs. 6,000 per year. The ongoing scheme aims to cover around 12.5 crore SMF families,” he added.

The government will provide Rs 10,774.50 crore over a three-year period towards matching premium contribution (which will depend on the age of each farmer) for 5 crore such farmers. This scheme will ensure pension of Rs 3,000 a month to the farmers after they turn 60.

A similar scheme was also cleared for small traders, retailers, shopkeepers and self-employed with an annual GST turnover of less than Rs 1.5 crore. They will be able to enrol for the pension scheme through more than 3.25 lakh Common Service Centres spread across the country.

The Cabinet also approved a hike in scholarships given to widows and wards of dead or ex-service personnel of armed and paramilitary forces from the National Defence Fund and extended its ambit to include wards of state police officials killed in terror or Maoist attacks.

The scholarship amount has been hiked to Rs 2,500 a month for boys from Rs 2,000 a month and to Rs 3,000 a month for girls from Rs 2,250. “Our government’s first decision is dedicated to those who protect India. Major changes approved in PM’s Scholarship Scheme under the National Defence Fund including enhanced scholarships for wards of police personnel martyred in terror or Maoist attacks,” Modi said in a tweet.

The Cabinet also gave its nod for a vaccination scheme for bovines and other livestock to control Foot and Mouth Disease (FMD) and Brucellosis to help farmers who depend on livestock for income. The government will earmark Rs 13,343 crore to control and eradicate these diseases over the next five years. The diseases, common among cows, bulls, buffaloes, sheep, goats, pigs etc can lead to up to 100 per cent loss in milk production for months, and can lead to infertility, affecting the farmers who rear them.