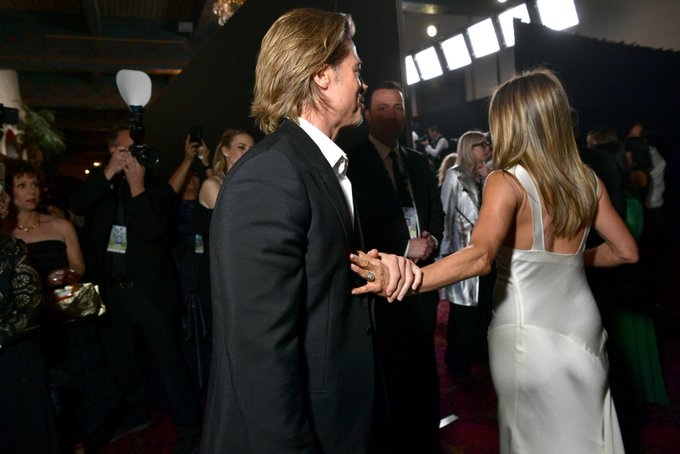 Pitt and Aniston, who were married for five years, won big last night.

During Pitt’s acceptance speech, Aniston was seen laughing as Pitt joked about his love life and  being on Tinder.

Brad Pitt joked about being a guy who gets high, takes his shirt off and doesn’t get along with his wife and the cameraman panned to Jennifer Aniston. SOMEONE GIVE THIS CAMERA CREW AN EMMY #SAGAwards pic.twitter.com/CdUZZTSTuT

Pitt was also seen cheering for his ex-wife backstage, when she was making her acceptance speech.

Moments after the clip went viral, Twitteratis started sharing their ‘love’ for the former couple:

brad pitt and jennifer aniston ending all the rumors pic.twitter.com/e8S7q6VpQN

The continuing joys of this awards season are the reaction shots of Jennifer Aniston every time Brad Pitt wins an award pic.twitter.com/yV8PkkuyHz

Me looking at photos of Brad Pitt and Jennifer Aniston at the SAG awards pic.twitter.com/Yi9MM9CV61

Brad Pitt and Jennifer Aniston had tied the knot in 2000 and divorced in 2005.