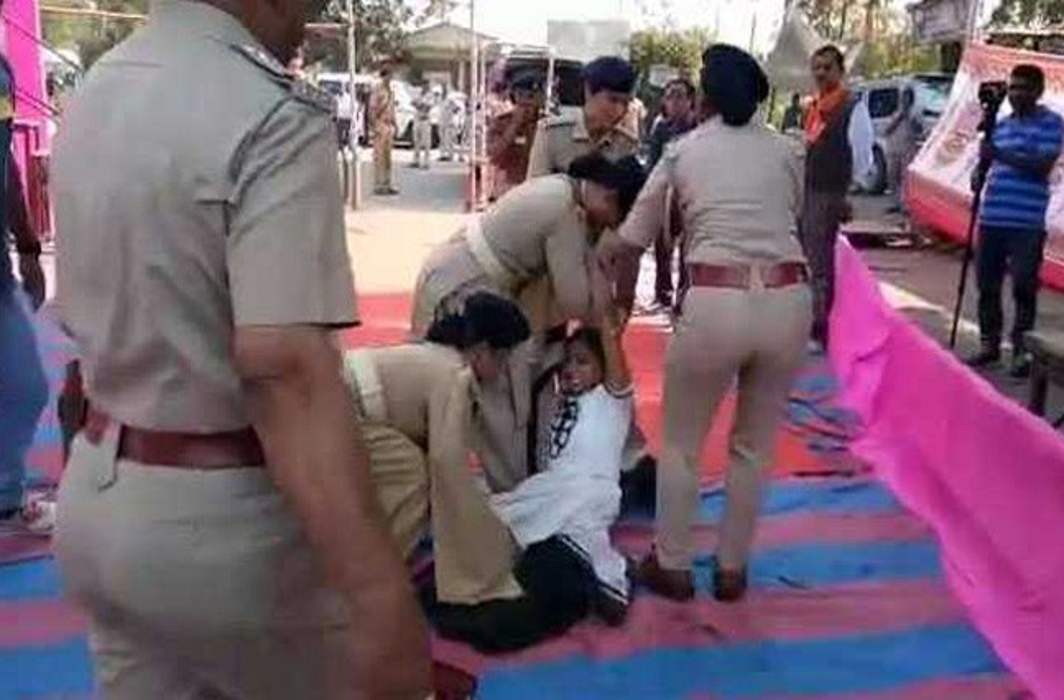 In an obviously condemnable act that could cost the BJP dearly in the upcoming Gujarat assembly polls, security personnel at the venue of an election rally being addressed by chief minister Vijay Rupani violently dragged away a 26-year-old daughter of a martyred BSF jawan as she tried to approach the stage to voice her grievances.

The disturbing incident, caught on video, flies in the face of BJP’s repeated claims of having the greatest respect for India’s security personnel, martyrs and their kin – a poll pitch which the party and Prime Minister Narendra Modi have often used to counter the Congress party, which they claim “insults our jawans and the Army”.

The incident occurred on Friday in Gujarat’s Narmada district where chief minister Vijay Rupani was addressing an election rally.

According to reports, 26-year-old Rupal, daughter of Ashok Tadvi – a BSF jawan who was martyred in Srinagar, Kashmir in 2002 – rushed towards the stage to inform the Gujarat chief minister that her family was yet to receive the compensation that was announced for them for her father’s martyrdom.

In the video of the incident, that has since gone viral on various social media platforms, Rupal can be seen rushing towards the stage when she is accosted by several women police personnel who then forcefully eject her from the venue even as she pleads to them saying Ï want to speak to Rupani sahib”. Ironically, Rupani can be seen in the background telling the audience at the rally that the saffron party is committed towards “desh ki sewa” (service of the nation).

According to a report in the Times of India, following Tadvi’s martyrdom in 2002 his family had been promised land as compensation by the Gujarat government – then led by Narendra Modi who was the state’s chief minister. However, the family said that they are still struggling to get the piece of land.

As the video of the incident went viral, Rupani took to Twitter to counter Rupal’s claim of being denied the promised compensation. He asserted that Tadvi’s widow, Rekhaben, had been given four acres land, Rs 10,000 monthly pension and Rs 36,000 annual pension by the BJP government while also promising that the family will be given a 200 square meter residential plot near a road.

The shameful incident earned Rupani and the BJP a stern rebuke from Congress vice president Rahul Gandhi who is leading his party’s poll campaign in Gujarat where the party has been out of power for the past 22 years. In a tweet that was accompanied by a video of Rupal being dragged away by four women and a couple of male police personnel, Rahul said the incident showed the BJP’s “height of arrogance” while he took a jibe at Rupani calling him a “param deshbhakt” (biggest patriot) and chided him for “shaming humanity” by getting a martyr’s daughter forcefully evicted from his rally.

Later on Friday, Rupani sought to counter Rahul by alleging that the Congress vice president was “playing dirty politics” over martyrs while asserting that “only the BJP respects those who protect the nation”.