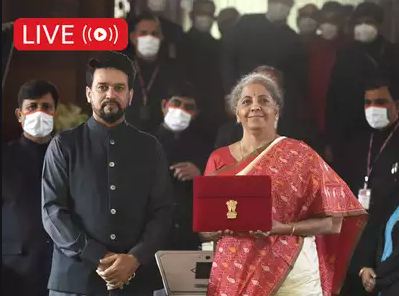 Finance Minister Nirmala Sitharaman on Monday presented the Union Budget 2021-22 in Parliament on Monday. She announced changes in the taxation process, exempting senior citizens above age 75 from filing income tax returns. She also announced new rules for removal of double taxation for NRIs, and a reduction in the time period of tax assessments among other measures. She announced Aatmnirbhar packages totalling Rs 27.1 lakh crore to fight the Covid pandemic in her budget speech. She allotted Rs. 35,000 crore for Covid-19 vaccine.

While presenting the Budget, Sitharaman said the budget for 2021-22 rests on six pillars – health and well-being, physical and financial capital and infrastructure, inclusive development for aspirational India, reinvigorating human capital, innovation & R&D, Minimum Govt and Maximum Governance. The Finance Minister had assured that the 2021-22 budget will be a Budget like never before.

Sitharaman said government is committed to welfare of farmers. She said MSP has gone through a sea change. Over Rs 75,000 crore have paid to wheat farmers in 2020-21 and 43.36 lakh farmers have benefited from this. The finance minister announced to hike the FDI limit in Insurance from 49% to 74%.

The FM Sitharaman allotted announced 11,000 km of national highway infrastructure this year specifically in three states which are set to contest elections later this year. Over Rs 1 lakh crore have been allocated to Tamil Nadu, Rs 65,000 crore for National Highways in Kerala and Rs 95,000 crore for road projects in West Bengal.

The Finance Ministry’s Economic Survey projected that India’s GDP will record 11 percent growth in 2021-22. The nominal GDP growth has been estimated at 15.4 percent, implying an assumption of 4.4 per cent inflation during the year. This year’s budget is unique as it is paperless. The finance minister used a tablet computer to deliver a paperless Budget address.

The Aam Aadmi party took a dig at Modi government in its tweet after the Finance Minister presented the Budget in Lok Sabha. This is what the AAP tweeted.

After the presentation of Budget in Lok Sabha, senior Congress leader Shashi Tharoor took a dig at the BJP government. This is what he tweeted.

No change in income tax slabs

Income tax slabs will remain the same, announced FM in her budget speech. To further ease filing of IT returns, details of capital gains and interest from banks, post offices, etc will be pre-filled.

Government to borrow Rs 80,000 crore in a bid to meet FY21 expenditure

Nirmala Sitharaman says no IT returns for those above 75

Those above 75 years of age will not have to file I-T returns.

The government has launched one nation, one ration card scheme through which beneficiaries can claim their rations anywhere in the country. The scheme is under implementation by 32 states & Union Territories.

Amid the ongoing farmers’s protest against the centre’s three farm laws, Sitharaman says government is committed to welfare of farmers. She said MSP has gone through a sea change. Over Rs 75,000 crore have paid to wheat farmers in 2020-21 and 43.36 lakh farmers have benefited from this.

In 2021-22 the government will also bring the IPO of LIC for which the FM is bringing the requisite amendments in this session itself. The FM announced government’s plan to sell part of its holding in Life Insurance Corporation of India this year through initial public offering.

The FM Sitharaman increases FDI limit in insurance to 74 percent

The finance minister announced to hike the FDI limit in Insurance from 49% to 74%. She however said that majority directors on board and Key management personnels will be Indians.

The pneumococcal vaccine to be rolled out across the country. This will avert more than 50,000 child deaths annually, says FM.

The government announces a budget of Rs 18,000 crore for public buses.

The centre to provide Rs 1.10 lakh crore outlay for railways, of which Rs 1.7 lakh crore is for capital expenditure.

The government has announced a new central healthcare scheme to strengthen the country’s healthcare infrastructure over the next 6 years. The Pradhan Mantri Atma Nirbhar Swasthya Bharat Yojana has been allocated around Rs 64,180 crore.

All private vehicles beyond 20 years and commercial vehicles older than 15 years old will have to undergo fitness test.

Government to launch Mission Poshan 2.0; Jal Jeevan Mission Urban will be launched. “The Urban Swachh Bharat scheme will be implemented with an outlay of over Rs 1.4 lakh crore,” she said.

Sitharaman said today India has 2 #COVID19 vaccines available and has begun safeguarding not only its own citizens but also those of 100 or more countries.

The preparation of this Budget was undertaken in circumstances like never before, in view of calamities that have affected a country or a region within a country. But what we have endured with COVID-19 to 2020 is Sui generis, says finance minister Nirmala Sitharaman.

Congress MPs Jasbir Singh Gill and Gurjeet Singh Aujla wear a black gown to the Parliament to protest against the three farm laws, that have sparked a widespread agitation by farmers.

The Cabinet ministers have approved the #UnionBudget 2021-22 that will be presented by Finance Minister Nirmala Sitharaman in the Parliament at 11 am.

Ahead of the Budget 2021 presentation, Congress leader Rahul Gandhi has tweeted that MSMEs, healthcare and defence sectors should be at top focus.

At the start of the joint session of Parliament on Friday, Prime Minister Narendra Modi said Finance Minister Nirmala Sitharaman had already announced 3-4 mini budgets and that the 2021-22 Budget should be seen as an extension of the same effort.