Candid Conversation with actors of Vaidya 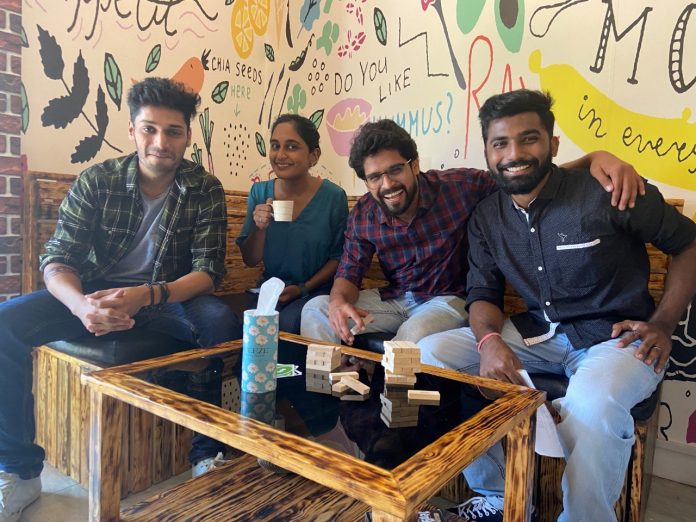 Vaidya is a short film written and produced by Harsh Agarwal. It is the story of two guys – Kabir (played by Puneet Kumar Mishra) and Vaidya (Ronit Agrawal) who meet at a beach and fall for each other. Vaidya’s story and treatment is subtle but it resonates with the audience and leaves a mark. The story steers away from chiched concepts and Ronit and Puneet create a chemistry to remember. The film is directed by Sumit Pawar and Harsh.

We get talking with Puneet and Ronit on Vaidya and know more about what has been going on in their heads.

1. Why did you agree to play this role?

Ronit : I loved how Vaidya was written when I was first asked to audition. Vaidya had a certain vibe about him in that one pager dialogue. Even in the snippet we received for auditions, it was clear that there were a range of emotions to be played.  I understood this character had layers and I wanted to take the challenge of playing such a character.

Puneet: Honestly, for me it is the opposite. When I gave the audition, I didn’t even know what this character was. Unfortunately the limited stuff that I received didn’t give much and the audition was just another audition. But when I read the script, I understood it was something different than what I have done so far. The story also had just two actors so it was also a pragmatic choice to do it since I would get more out of it. Besides, it was a new team and new learnings were guaranteed. And of course, the shoot was in Goa! It was always on my list to explore!

2. Do you relate yourself to Vaidya/Kabir?

Ronit : Yes I do. What Vaidya and I probably had in common was our star signs. In my head he was Pisces and I’m also Pisces. Now if you read more about star signs which most of the people really do, you’ll know what I’m saying.

3. Which is your favorite part of the film and why?

Ronit : I love how harsh has written every scene and how Sumit has conceptualised it which justifies both the character and also the story. But if I had to pick one, I would pick the farewell scene when Kabir is leaving. Usually goodbyes are awfully dramatic in cinema with  heavy music and elaborative background. But that scene is so subtle. There is hope and both the characters are smiling. You can feel that deep connection.

Puneet: My favorite part is when love is being established – starting from the first touch. The two are hesitant and not sure if they should or not. But the way that scene progresses, just with movement of eyes and simple touch – establishing a connection; that’s my favorite. Also, when I had arrived in Goa, Harsh asked me if I had ever been inside the sea. When I told him no, he didn’t allow me to enter the sea at all since he wanted to capture my real raw emotions and expressions of experiencing the sea for the first time. And it was truly interesting because our DOP Shivam also got inside the sea with me and shot.

4. How was your overall shooting experience?

Ronit : Oh, It was a great experience. Learned so many things from so many people. I felt lucky to be a part of this team and I think I took every little experience from everyone while shooting. Despite so many difficulties, the whole team worked very hard to achieve what the makers wanted. For me that’s an awesome and a learning experience.

Puneet: It was an amazing experience. The background work on our characters by our directors deserves a deep appreciation. They were very certain (and also strict) with what they wanted out of these characters. When the script doesn’t even say ‘Kabir’ and ‘Vaidya’, you are establishing the story of two. And then your DOP is constantly struggling with you to make sure that this is the best scene ever –  and the entire team becomes one in this struggle which feels amazing.

5. What was the most challenging thing for you during the whole process?

Ronit : The most challenging thing for me was to understand the vision of my directors. We, as actors, when we read scripts – we have our own set of ideas, imaginations, insecurities and our own understanding of the character. And it’s important to align that with what the director is thinking. And in our case, we had two. It took a number of debates, agreements and disagreements to really make that happen.

Puneet: There were so many challenges. First of all, I didn’t understand what the script wanted from me. We had zero pre-rehearsals and didn’t know the team at all since all of us were in different cities. And then travelling in a pandemic. I met my co-actor only a day before. And our challenges didn’t stop after we finished shooting. We realised we also had to dub. This whole process was just a series of challenges that we overcame to get this beautifilm film done.

6. What are you working on now?

Ronit: I am not allowed to reveal much about the projects in the pipeline. But now in this second wave, things are again locked. So I am focussing more on myself so that I can deliver more to the audience.

Read Also: Ideology out for summer vacation, Congress Group of 23 becomes 22 with Jitin Prasada exit but who’s next?

Puneet: Same story as Ronit. Lockdown has put a brief full stop on ongoing projects. But as soon as things are better, I am craving to do some theater. And then there are ongoing conversations for films and web-series that should start after the lockdown is lifted