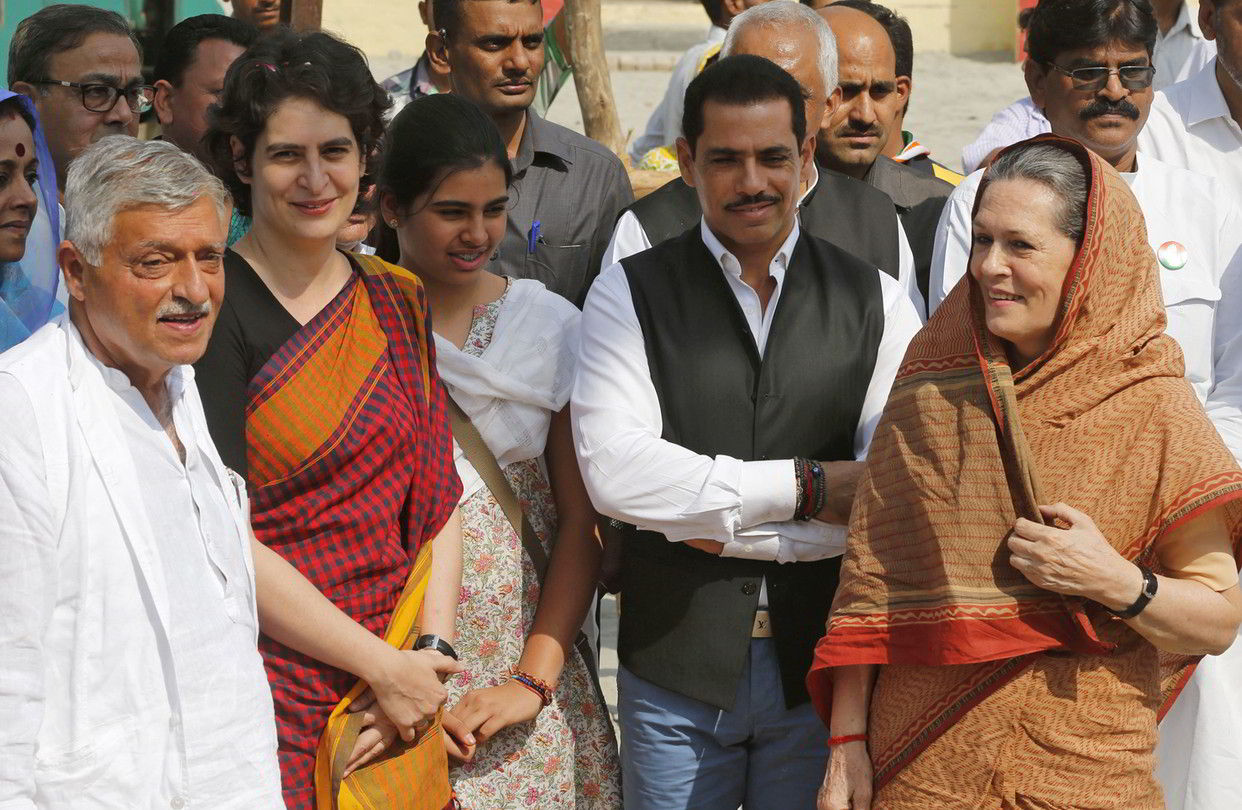 While the Congress and BJP trade charges against each other over a Times Now report which claimed that absconding arms dealer Sanjay Bhandari had, in August 2012, booked business class air tickets for Robert Vadra’s travel to Zurich, tax officials claim that the said air fare was paid for in cash and no trail of where the money came from could be proved during a probe.

The claims by I-T officials who spoke anonymously to The Indian Express appear to take the steam out of the political attacks made by the BJP against the Congress party’s first family at a time when the saffron party too finds itself in a spot over allegations that Jay Shah, son of BJP national president Amit Shah, saw a 16000-times hike in his company’s turnover in the years that followed Narendra Modi’s stunning rise as the country’s Prime Minister in May 2014.

The Times Now ‘expose’ against Vadra, the controversial husband of Congress president Sonia Gandhi’s daughter Priyanka Gandhi, had come days after online portal The Wire published the report about Jay Shah’s meteoric rise in wealth. The Congress has questioned the timing of the report over Vadra, claiming that it was deliberately being circulated by the BJP to deflect media and public attention from the allegations against Jay Shah.

However, while the conjectures arising out of the article on Jay Shah are largely based on tax returns and official filings made by the company of the BJP national president’s son, the allegations being made against Robert Vadra over his alleged links with Sanjay Bhandari are reportedly based on an email trail exchanged between the two, with little evidence to actually prove the money trail.

On Wednesday, The Indian Express said that income tax officials believe that the probe into the alleged payment by Sanjay Bhandari of air tickets for Vadra’s travel to Zurich had “virtually reached a dead end”. The newspaper claimed that: “when tax sleuths approached the Paharganj-based travel agency (International Travel Home) through which the air passage had been booked, they were informed that the payments were received in cash and they had no recollection whether the money was handed over to them by someone from either Sanjay Bhandari’s side or Robert Vadra’s side.”

The Indian Express report also anonymously quoted a senior I-T official as saying: “If the payments for the flights had been made by cheque, we could have traced the person who made the payments. But since the payments were made in cash there is nothing to dig deeper. And an amount of between Rs 8 lakh-Rs 10 lakh is too small an amount for us to call Robert Vadra over for questioning.”

The report added that the mail trail of ticket bookings for Zurich were located by them shortly after searches were conducted along with other mails connected to the renovation of a property in London ostensibly being done by Sanjay Bhandari for Robert Vadra.

Vadra and his lawyers have reportedly claimed that they had no communication with Sanjay Bhandari during the period for which the arms dealer is facing multiple probes by Indian agencies like the Enforcement Directorate and the I-T department.

The Times Now ‘expose’ however claims that: “According to the email trail, Bhandari bought tickets for the tainted businessman (Vadra) at a time when the arms dealer was being investigated for his role in swinging a jet trainer deal for Swiss company Pilatus. The fact that one of the tickets booked for Vadra was to Zurich, the financial capital of Switzerland, hints at his involvement in the Pilatus deal. However, there is no clarity on the issue as of now, and Times Now is awaiting a reply from his side.”

The BJP has latched on to the Times Now expose in an attempt to directly attack Congress president Sonia Gandhi and her son, party vice president Rahul Gandhi over the Bhandari-Vadra links. On Tuesday, the BJP had fielded Union defence minister Nirmala Sitharaman to lead the party’s broadside against the Congress on the issue.

Sitharaman had said that the “studied silence” of Sonia and Rahul on the charges being leveled against Vadra will be construed as their acceptance of the allegations being true. Citing the Times Now report, Sitharaman had alleged that a London house linked to Vadra had been refurbished by Bhandari and that 7.5 lakh Swiss francs were deposited in a bank account of the arms dealer- possibly as payment for the renovation of Vadra’s London home.

“Why is the Congress vice-president, who has been emulating the Prime Minister in his tweets, maintaining a silence on this,” the defence minister had asked.

The Congress party had hit back at the BJP with its chief spokesperson, Randeep Singh Surjewala claiming that the allegations against Vadra were being raked up by the saffron party to “distract people from the accusations hurled against Jay Shah”.

“An unnerved and running scared BJP is on a ‘save Shah-Zada’ (a reference to Jay Shah) mission. Instead of ordering an inquiry into the business dealing of company owned by Amit Shah’s wife, daughter-in-law and son, which is being demanded by people in Opposition and even RSS, Nirmala Sitharaman is on an agenda of diversionary tactics but they will never succeed (sic),” Surjewala had said.

The Congress spokesperson had added that “the vicious witch-hunt and vendetta against Robert Vadra has continued for 41 months by Prime Minister Narendra Modi’s government and yet not a single wrongdoing, violation of any law or a criminal misconduct has been established (against Vadra).”