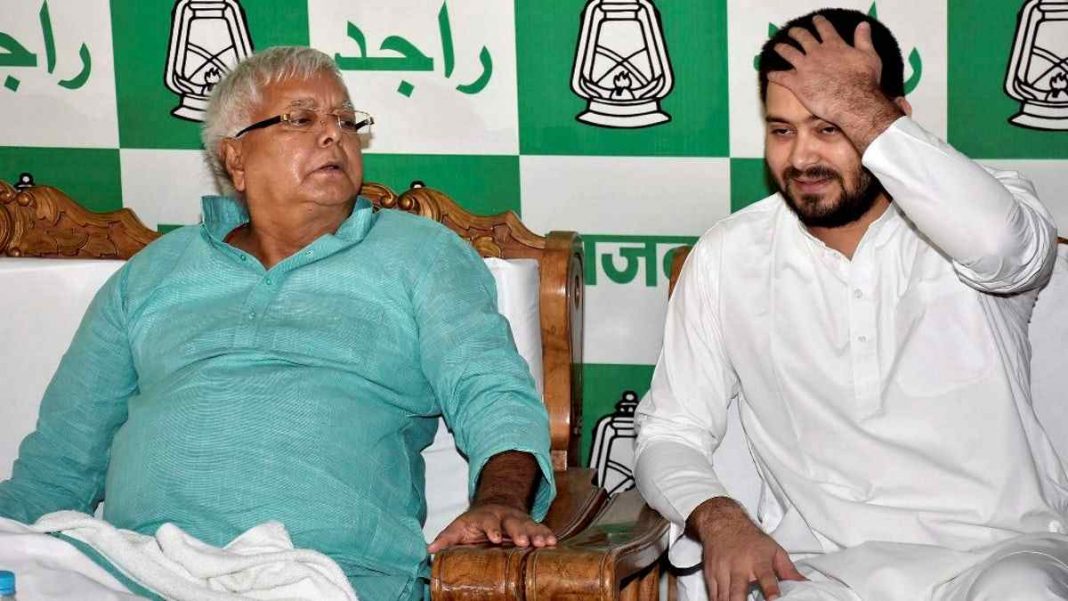 The RJD chief and his son, former Bihar deputy chief minister Tejashwi, have both maintained that he charges are politically motivated

The Central Bureau of Investigation (CBI) has summoned former railway minister Lalu Prasad Yadav and his son Tejashwi Yadav for interrogation, on September 11 and 12, in connection with an alleged Railways Hotel scam.

The father-son duo has maintained that the charges against them are politically motivated. However, it was the probe agency’s claims of corruption against Tejashwi – then Bihar deputy chief minister – that had, in August, caused the split of the RJD-JDU Mahagathbandhan government in Bihar, amid speculation that chief minister Nitish Kumar had wanted him to resign from his cabinet but couldn’t have his way and so decided to step down himself.

The CBI’s case revolves around allegations that as the railway minister in the UPA-I government, Lalu Prasad had approved the maintenance of two railway hotels – BNR Ranchi and BNR Puri – in favour of Sujata Hotels, a company owned by Vinay and Vijay Kochhar, against as illegal gratification of receiving three acres of prime land through a benami company.

The FIR in the case alleges that the Rashtriya Janata Dal (RJD) chief had abused his ministerial position and extended an undue advantage to the Kochhars. The Kochhars, as bribe for the deal, transferred the premium land to Lalu Prasad through the benami company which is said to be owned by Sarla Gupta, wife of Prem Chand Gupta, a key aide of the RJD chief and a former union minister himself.

Lalu Prasad’s, wife Rabri Devi has also been made an accused in the case along with Sarla and Prem Chand Gupta, the Kochhars and PK Goel, the then managing director of the benami company in question – Delight.

Tejashwi, it is alleged, is a joint owner of the land where a shopping mall is now proposed to come up according to some media reports. Both Lalu Prasad and Tejashwi have maintained that the former deputy chief minister of Bihar and the RJD chief’s heir apparent had nothing to do with the case and was “just a boy who had not even sprouted a moonch” when his father was the railways minister between 2004 and 2009.

However, news channel NDTV quoted a CBI official as saying: “Tejashwi was made an accused in the case not because of what his father had done as a railway minister but because he along with his mother Rabri took over and operated a company that owned the land in 2014, when he was 24.”

During the NDA regime under Prime Minister Atal Bihari Vajpayee, the government had decided to hand over management of catering services of railway hotels to IRCTC.

It is alleged in the CBI’s FIR that when the UPA-I government under Dr Manmohan Singh came to power in 2004 and Lalu Prasad was appointed Union railway minister, he entered into a criminal conspiracy with the Kochhars (owners of Sujata Hotel), Sarla Gupta and some yet unidentified IRCTC officials to earn “undue pecuniary” benefits.

The Kochhars then allegedly sold three acres of premium land in Patna for Rs 1.47 crore to Delight Marketing on February 25, 2005 – a price that was way below the then prevailing circle rate.

Between 2010 and 2014, the ownership of Delight Marketing was transferred from Sarla Gupta to Lara Projects owned by Rabri Devi and Tejashwi Yadav. Lalu Prasad had at the time ceased to be a Union minister as his party was not part of the UPA government. The value of the Patna land had also spiralled to Rs 32.5 crore as per the circle rate prevailing at the time, the CBI has claimed.