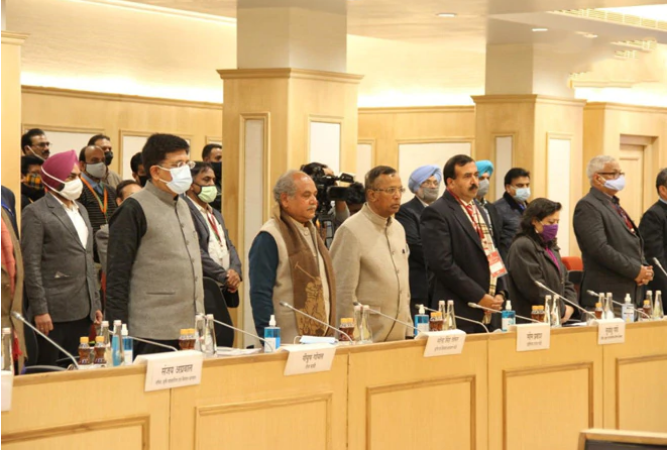 The seventh round of talks between the central government and farmers’ representatives held on Monday at Delhi’s Vigyan Bhawan remained inconclusive and the next round of talk will be held on January 8. In the middle of talk, farmers hold a silent protest saying talks can resume only once centre clears stand on repealing three farm laws.

The meeting begins with observing two-minute silence for those who have died in the protests.  Union Ministers Narendra Singh Tomar, Piyush Goyal and Som Parkash along with government officials and representatives of farmers observed two minute silence.

Farmers from Punjab, Haryana, Uttar Pradesh and some other states camped at Delhi borders for the past 39 days demanding to repeal farm laws and legal guarantee of MSP.

After five rounds of inconclusive talks, the government and 40 farmer unions reached common ground during the sixth round of negotiations on December 30 to resolve protesting farmers’ concerns over rise in power tariff and penalties for stubble burning. However, the two sides remained deadlocked over the main contentious issues of the repeal of the three farm laws and a legal guarantee for MSP.

After the enactment of three farm laws in September 2020, the government had said these laws are major farm reforms and aimed at increasing farmers’ income but the protesting farmers have feared that laws would weaken the MSP and mandi systems in the country and the government would leave them at the mercy of big corporates.

The farmers’ representatives, who attended the last round of meeting on December 30, said the government has indicated them that it would not repeal the laws, citing the long and cumbersome process required. The government also made it clear that it is not ready for legally enforced support prices for produce and said a committee can be formed to look into it.

The farmers have taken a hard line on the issue, saying they will hold a tractor rally on January 6 if their demands are not fulfill. There are also plans to hold a rally on January 26, the Republic Day. The farmer union representatives in a press conference had decided to march towards Delhi from Shahjahanpur border next week if the government doesn’t meet their demands.