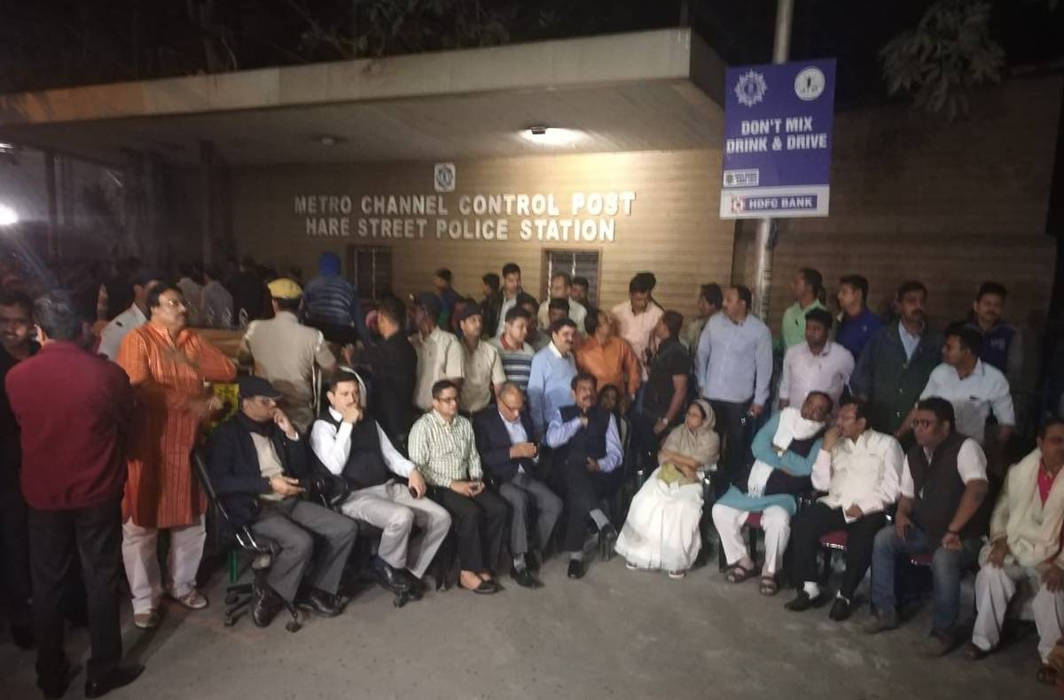 As the clash between Modi government at the Centre and Mamata Banerjee’s government in West Bengal continues, the political use/abuse of legal machinery was writ large over the unfolding drama.

In what is seen as Modi government’s move to target the opposition at a time when Mamata Banerjee was playing a key role in efforts to forge an anti-BJP coalition, the CBI tried to question the Kolkata police commissioner Rajeev Kumar on Sunday – without a warrant – inconnection with chit fund scams in which persons with close links to the Trinamool chief are among the prime accused.

The CBI action came a day before its controversial interim director M Nageswara Rao, who was not supposed to take any substantive decisions, was to give way to the newly appointed CBI chief Rishu Kumar Shukla. As the drama in Kolkata was unfolding, M Nageswara Rao, the controversial interim CBI Director, told mediapersons in New Delhi that his officials were being intimidated by Banerjee’s police and that he feared that important documents related to the case may be destroyed amid the Centre-State stand-off.

An all-out war broke out between centre and the Mamata Banerjee government following the CBI move. West Bengal police briefly detained the CBI officials. A cordon was also placed around the CBI office in Kolkata.

Shortly after, chief minister Mamata Banerjee rushed to Kumar’s residence and threw her weight behind the officer she termed as one “among the best in the world” whose “integrity, bravery and honesty is unquestioned”.

Accusing the BJP of “political vendetta,” Banerjee then announced an indefinite dharnaagainst the “stifling of the spirit of Constitution and federalism.” Kumar, who, according to the CBI, had ignored the agency’s summons, also joined the CM in the “satyagraha.”

Support poured in for Mamata Banerjee from the entire Opposition except the Left, all of whom alleged that the happenings in Kolkata were the result of Prime Minister Narendra Modi and his Union government’s concerted effort to destroy institutions and harass political opponents.

The issue rocked the Parliament and both Houses had to be adjourned amid a ruckus with hot exchanges between ruling party and Opposition and incessant sloganeering. The Opposition came together to back Mamata Banerjee and attacked the government over the alleged misuse of central agencies against political rivals.

As in nearly every such instance, PM Modi was not to be seen in Parliament. Union Home Minister Rajnath Singh said in Lok Sabha that there may be a breakdown of constitutional machinery in West Bengal, adding that the Centre has the authority to take action. “There may be constitutional breakdown in West Bengal… under the Constitution, the central government has been vested with the power to maintain normalcy in any part of the country,” he said.

West Bengal governor Keshari Nath Tripathi meanwhile submitted his report to the Centre on the situation amid speculation over a possible move by Modi government to invoke state emergency and impose President’s rule over the state.Union Home Minister Rajnath Singh had earlier called up Tripathi to take stock of the situation. The governor prepared the report after the Special Investigation Branch (SIB) submitted its findings. The governor also held discussions with state Chief Secretary Malay De.

Alongside, the Centre moved the Supreme Court as, on Monday morning, even before its proceedings for the day commenced, Solicitor General Tushar Mehta, appearing for the Centre, sought an urgent hearing of the bench headed by Chief Justice Ranjan Gogoi to allow the CBI to continue its probe in the chit fund scams by questioning Kumar. Mehta claimed that the Kolkata police chief was “destroying evidence” linked with the Saradha and Rose Valley scams which have defrauded lakhs of small investors across Bengal.

The Chief Justice, however, declined Mehta’s request, stating instead: “Lay the material if Kolkata police commissioner is trying to destroy evidence, and we will come down so heavily that he will regret (sic).” The chief justice directed that the matter be listed for hearing tomorrow but also pointed out to Mehta that his application provided “no evidence” for the claim that the Kolkata police commissioner was destroying evidence or scuttling the CBI’s probe into the scams.

In Lok Sabha, Home Minister RajnathSingh justifying the CBI action, told the House that the CBI’s action was in accordance with Supreme Court’s orders which had directed the agency to investigate the chit fund scams. Singh said that the agency had summoned Kumar on multiple occasions but that the Kolkata police chief failed to do so.

This was not entirely true. Following the high drama in Kolkata on Sunday evening, Banerjee had informed the media that on December 8, a Calcutta High Court order had restrained the CBI from enforcing the summons it had served on Kumar. Kumar and several other Kolkata police officers had also complained to the high court’s bench of Justice Shivakant Prasad that they were being served summons well after the dates fixed for their questioning by the agency had already passed. The pleas filed by Kumar and his colleagues are scheduled to come up for hearing before Justice Prasad’s bench on February 13.

Kumar’s contention that the summons were being wrongly served can be illustrated from two undeniable facts. Two notices had been issued to Kumar’s colleagues by the CBI in recent months asking them to appear for questioning. First, on November 30 and then again, on December 12. Strangely though, in both these instances, the date of questioning preceded the date on which these cops were to appear before the CBI – i.e for the notice dated November 30, the date of appearance was November 6 and 7 while for the notice issued on December 12, the date of appearance was Dec 10. Expectedly, the Calcutta High Court had suspended both these notices as well as those issued to Kumar. Therefore, the CBI’s claim and Rajnath Singh’s reiteration of it that the Kolkata police officers were ignoring the summons appear far from the facts.

After the Centre moved the Supreme Court on Monday, the West Bengal government filed a petition in the Calcutta High Court against the CBI’s attempt to question Kolkata police chief Rajeev Kumar at his residence in connection with chit fund scam cases. However, the Calcutta High Court refused an immediate hearing and listed the matter on Tuesday. State Advocate General Kishore Dutta submitted that despite a stay by the HC on steps regarding notice to state police officials, the CBI sought to enter Kumar’s residence on Sunday and question him.

The BJP launched a twin attack on West Bengal Chief Minister Mamata Banerjee in Parliament and outside. While Union Home Minister, Rajanth Singh, in his statement told the house that it was “unprecedented the way the CBI officers were stopped” in Kolkata on Sunday, his colleague and education minister, Prakash Javadekar, accused Ms Banerjee of shielding those who had once gone to jail for the Saradha scam.

The Opposition, except for the Left, has rallied around West Bengal Chief Minister and Trinamool Congress leader Mamata Banerjee in her direct confrontation against the Centre. Apart from messages, phone calls, and an outpouring of sympathy for the beleaguered leader currently sitting on dharna in Kolkata, leaders have now started taking the flights to join her. Delhi Chief Minister Arvind Kejriwal and Rashtriya Janata Dal leader Tejashwi Yadav are amongst the first to announce their decision to join Banerjee at her “Save the Constitution” dharna.

India and the United States of America signed several pacts during the recent visit of US Secretary of State Mike Pompeo and...
Read more