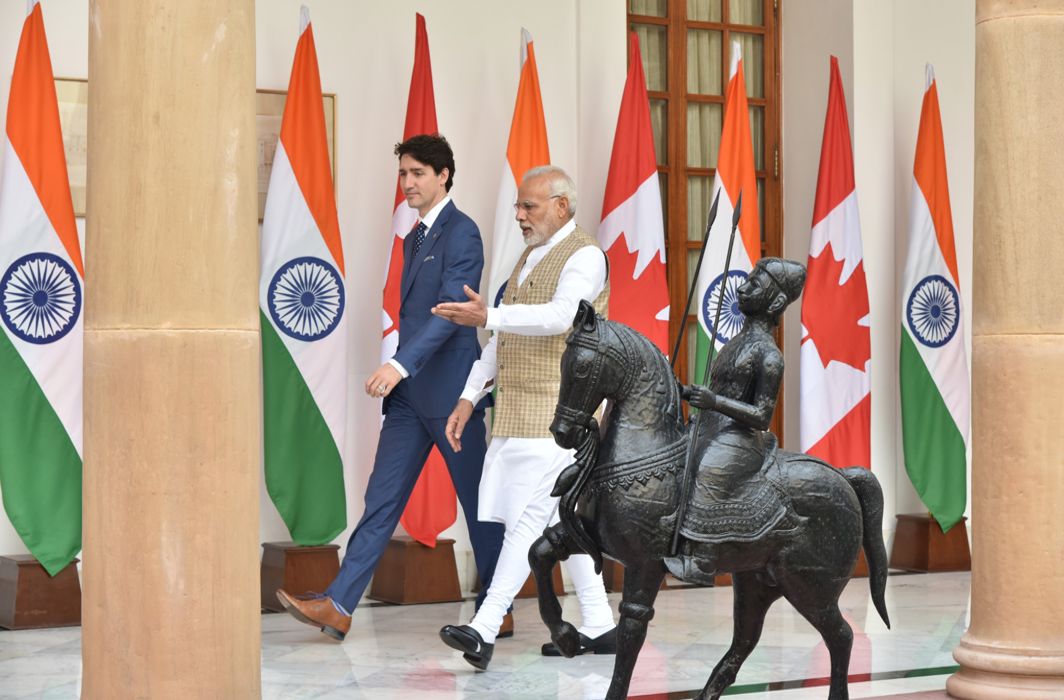 At the fag end of his week-long India visit, Canadian Prime Minister Justin Trudeau was given a ceremonial reception at Rashtrapati Bhavan on Friday, his sixth day in the country. He landed in India on February 17.

The visit of Canadian PM comes after the visit of  Prime Minister Narendra Modi to Canada in April 2015, before Trudeau assumed office in November that year.

On Friday morning, he was received by President Ram Nath Kovind, Prime Minister Narendra Modi and members of the Union Cabinet, with Modi welcoming him with a hug ahead of the ceremonial reception at Rashtrapati Bhavan.

Trudeau had a busy day. Trudeau met with External Affairs Minister Sushma Swaraj on Friday and paid tribute to Mahatma Gandhi at Rajghat.

The delay in formal welcome had given rise to speculation about cold-shouldering the visiting dignitary, attributing this to Trudeau’s perceived softness to Khalistani separatist elements in his country and providing them a platform for voicing their demands.

After arriving in India, Trudeau and his family have visited Agra, Ahmedabad, Mumbai and Amritsar. While Modi did not accompany Trudeau to Ahmedabad, a meeting with Punjab Chief Minister Amarinder Singh in Amritsar on Wednesday was organised only at the last moment.

On Wednesday, the Trudeau family had visited Amritsar’s Golden Temple, along with his wife and children before meeting the Punjab Chief Minister Amarinder Singh, where, the latter shared the concerns about militancy issue related to the separatist movement of Khalistan.

On Thursday, fresh storm blew after it came to light that the Canadian High Commission here had extended an invitation to a convicted Khalistan separatist, Jaspa Atwal, for a reception in honour of Trudeau. The High Commission then rescinded the invitation while the Indian External Affairs Ministry said that it was ascertaining how a visa was issued to Atwal who holds a Canadian passport.

Trudeau later said that the matter was being taken “extremely seriously” and that Atwal should never have received an invitation.

Matters seemed to have been sorted out now. On Thursday evening, Modi said that he looked forward to the bilateral meeting on Friday. “I appreciate his (Trudeau’s) deep commitment to ties between our two countries,” Modi tweeted..

In his second tweet, PM Modi posted a picture of him playfully tweaking Elle-Grace’s ears with Trudeau smilingly looking on during a visit to Canada in 2015. He said, “I hope PM @Justin Trudeau and his family had a very enjoyable stay so far. I particularly look forward to meeting his children Xavier, Ella-Grace, and Hadrien. Here is a picture from my 2015 Canada visit, when I’d met PM Trudeau and Ella-Grace.”

I hope PM @JustinTrudeau and his family had a very enjoyable stay so far. I particularly look forward to meeting his children Xavier, Ella-Grace, and Hadrien. Here is a picture from my 2015 Canada visit, when I'd met PM Trudeau and Ella-Grace. pic.twitter.com/Ox0M8EL46x

Responding to PM Modi's welcome tweet, Trudeau tweeted back that his daughter Ella-Grace remembered the occasion on which the photo was taken and that his visit to India had been "great" so far. "We'll see you today," the Canadian Prime Minister said. At the Rashtrapati Bhavan, while Modi shook hands with Sophie Trudeau, Xavier and little Hadrien, he had a special hug reserved for Elle-Grace. Justin Trudeau and Sushma Swaraj held bilateral talks, their meeting coming a day after Swaraj met a Canadian delegation, including the Canadian Foreign Minister. They held discussions on a wide range of topics including strengthening relations in trade and investment, security and cybersecurity, energy, people to people contacts and other relevant bilateral and regional issues.

Picture speaks for itself! EAM @SushmaSwaraj had a warm meeting with the Prime Minister of Canada @JustinTrudeau and discussed ways to strengthen and deepen our partnership. pic.twitter.com/4nB1QmwgQT

Trudeau and his team were having talks with Indian PM Modi and his team of ministers and officials during the day on further strengthening India-Canada bilateral relations. The bilateral talks were said to focus on trade, defence, civil nuclear cooperation, space, climate change and education.

Delegation level talks were also to be held, with a number of agreements expected to be signed in several areas.