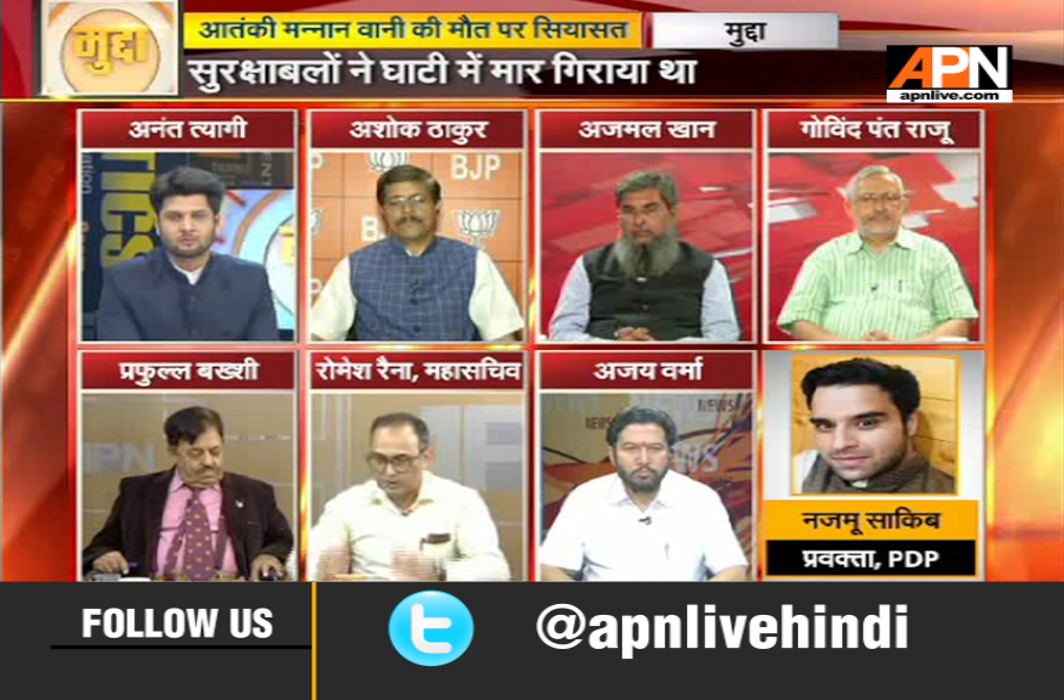 Khan said: “It has to be proved whether anti-national statements were made at all. It is not illegal to talk, or to assemble peacefully. It is the government’s responsibility to set up a fault-finding committee. I haven’t seen any threat that can be perceived from the Kashmiri students. The government has to respect the sentiments of all sections of the society.”

Sakib said: “Violence is never a solution. Why are Kahmiri youth being targeted?”

Bakshi said: “The government is not talking clearly. Manan is a victim of his own violence. Whether we like it or not, we have to accept that violence in Kashmir is religion based.”

Raina said: “Kashmir has been victim of terrorist violence since 1947.”

Baskshi said: “Students should not be dragged into politics. If you bring students into mainstream politics, anti-national slogans in varsities then become the next step. The second thing is that there should be rules in dealing with terrorist violence. I would like to be clear on that.”

Raina said:”Terrorism is part of the narrative in Kashmir. Many terrorist areas form electoral constituencies, and political parties try to play with the emotional pitch in susch areas.”

Verma said: “The government is double-faced.”

Thakur said: “The government will act against anyone indulging in anti-national acts. The government is probing the issue of the students shouting anti-India slogans following Manan Wani’s killing. Action will be taken against those found abetting terrorist activities.”

Raju said: “Whether JNU, BHU or Allahabad University, violence in campuses is usually dealt with by the varsity administration. We can’t brush aside or ignore incidents happening in AMU. The varsity must have taken action against the students after a thorough probe.”

Khan said: “Students may have been innocently talking, why should we jumping to any conclusion. Notice has been issued against seven people though there were 60 people present when the alleged incident happened. I have never said that investigation against the students is not warranted.”

Raina said: “Why is there a motivation behind students to indulge in anti-India acts?”

Khan said: “My only plea is that students should not feel penalised until a thorough probe is completed.”

Verma said: “The government should go in for a quick disposal so as not to traumatise anyone.”

As farmers are marching towards Delhi as a part of Delhi Chalo protest against the Centre's farm laws, the Delhi police has...
Read more

A 20-second video shows a body is lying on a stretcher in an isolated area of the hospital and a stray dog is nibbling at it. The video is widely shared on social media and has sparked a debate on Uttar Pradesh's government hospital conditions.
Read more

Kareena said that everyone is sitting at home and a lot of them are without jobs. Perhaps, people are simply trying to voice their opinions. Further she said that they are also here to spread positivity and peace.The idea is people remain happy in their space and should not get into each other’s hair.
Read more