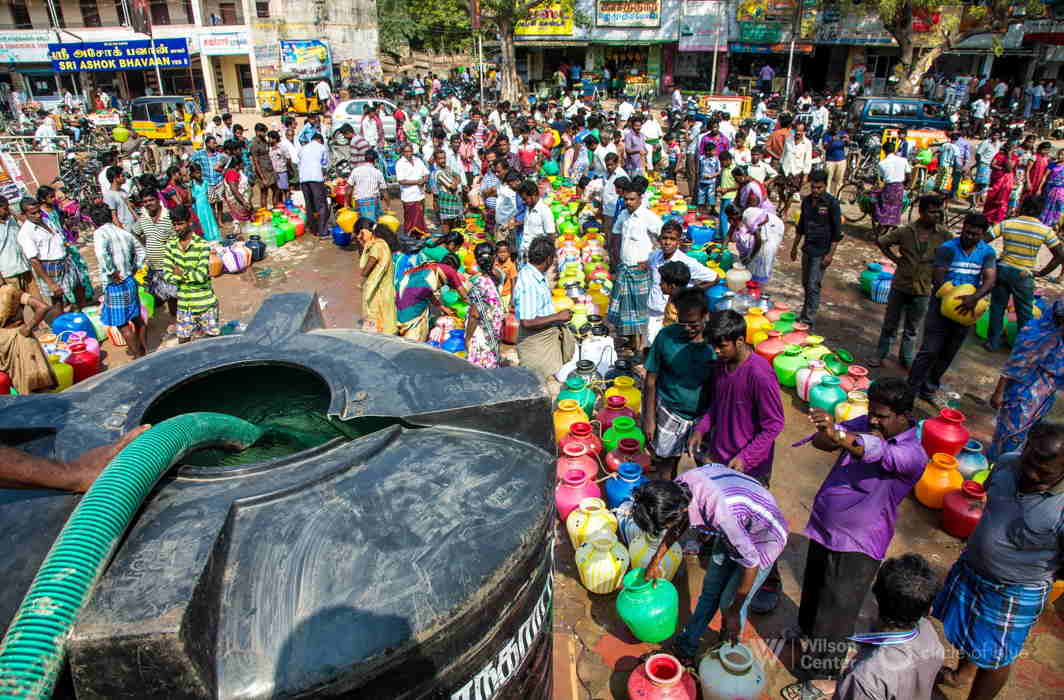 A year after a NITI Aayog report said India is facing the worst water crisis in its history and 21 Indian cities will run out of groundwater by next year (2020), the fact has hit home in Chennai which is reeling under a severe water crisis.

While Tamil Nadu (TN) chief minister K Palaniswami blamed media for creating an “illusion” of water scarcity in Chennai, the crisis in the city and around got worse as its reservoirs ran completely dry, while the distress has already forced over 100 hostels, many hotels and restaurants to shut down temporarily, Chennai metro to turn off air conditioning in the stations and offices telling their staff to work from home.

The high court was hearing a petition on the exploitation of groundwater for commercial purposes.

While the Tamil Nadu government said it took steps to handle the crisis (like allotting Rs 212 crore for digging deep borewells), the court directed the Public Works Department (PWD) secretary in the case to submit a state-wide comprehensive report on the number of reservoirs in the state, steps taken for desilting, amount sanctioned, and status of those works.

These facts notwithstanding, Tamil Nadu CM Palaniswami yesterday (Tuesday, June 18) reportedly said: “People should also understand the situation and cooperate. The media should not create an illusion of water scarcity using some stray incidents.”

Palaniswami also said drought and deficient monsoon had resulted in depletion of groundwater levels, but maintained that the issue wasn’t big. The CM said the state was largely dependent on ground water to meet the requirements till the onset of northeast monsoon in October.

“The [northeast] monsoon will arrive only by October-November. Till then we have to meet the requirements only from groundwater sources,” he said.

A day before this, Rural and Municipal Administration Minister SP Velumani said that the news reports of IT employees being requested to work from home due to water crisis was ‘manufactured’ and that authorities are capable of maintaining required water supply in Chennai until November.

TN Hariharan, managing director of Chennai Metro Water Supply and Sewerage Board, told The Indian Express that the crisis is not as disturbing as it is being projected.

He said that regular supply of water from Chennai metro water was 830 million litres a day (MLD) and has now come down to 525 MLD. Hariharan added that the water sources such as Sholavaram, Red Hills and Chemabarambakkam lakes have totally dried up. However, they are maintaining water supply through other sources and it can be managed till November.

However, reports from Chennai said water shortage has severely hit not just the residents, but several industries too. So far, nearly 100 hostels in Chennai’s neighbourhoods have been shut down. As per the Chennai Hostel Owners’ Welfare Association, 350 owners of at least 100 hostels have stopped the operations and asked residents to leave the establishment, the Indian Express (IE) reported.

More hostels would be closed down in the next few weeks if the water crisis does not abate, KS Manoharan, the secretary of the association, told IE.

Shobana Madhavan, president of the association, said despite booking private tankers weeks ago, many hostel owners are still waiting for water. To make matters worse, the private water tankers have also increased their rate to to Rs 3,500-4,000, which was earlier Rs 1500, she told IE.

Another industry hit by the water shortage is the IT sector. Many IT firms have asked their employees to work from home. Restaurants too have drastically cut-down their operations.

Residents have had to stand in line for hours to get water from government tanks. The water shortage has led to violent clashes leading to two deaths in the city, according to reports.

The acute water shortage has forced the city to scramble for urgent solutions, including drilling new boreholes.

But the big concern is the dry reservoirs and low groundwater levels. Groundwater reserves came to the rescue earlier, but their depletion has added to woes.

In its report “Composite Water Management Index (CWMI)” in June 2018, National  Institute for Transforming India (NITI) Aayog said India is suffering from the worst water crisis in its history and 21 Indian cities – including Delhi, Bengaluru, Chennai and Hyderabad – will run out of groundwater by next year, 2020, affecting 100 million people; 40 percent of India’s population will have no access to drinking water by 2030, the report said.

The report said millions of lives and livelihoods are under threat as 600 million Indians face high to extreme water stress and about two lakh people die every year due to inadequate access to safe water.

It said the crisis is only going to worse.  By 2030, the country’s water demand is projected to be twice the available supply, implying severe water scarcity for hundreds of millions of people and an eventual ~6% loss in the country’s GDP.