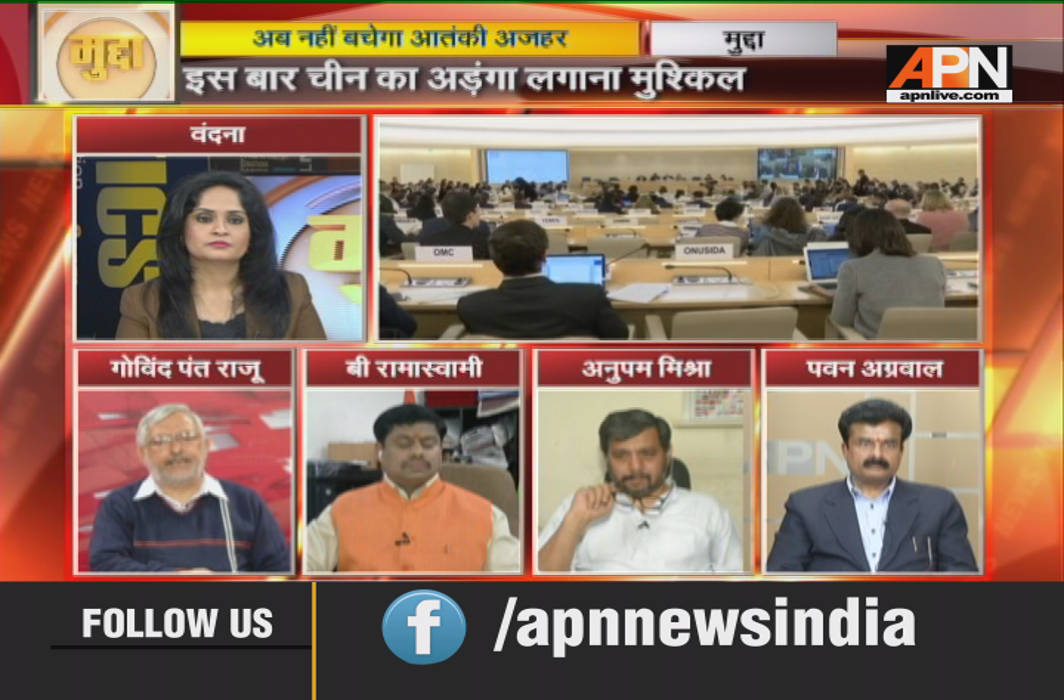 China, who is believed to have friendly relationship with Pakistan, has asked for evidence which proves Jaish-e-Mohammed chief Masood Azhar -‘a global terrorist’.

On the other hand, India is getting support of US, UAE, Saudi Arabia and Turkey among others who are ready to declare Masood Azhar-a global terrorist.

Now, the question which arises here is Why China is opposing from declaring Masood Azhar as a global terrorist? What is its intention behind this? APN in its popular show Mudda, will discuss over the same issue with Anchorperson Vandana along with TSA Magazine CEO Pawan Aggarwal, BJP leader B Ramaswamy, External Affairs expert Anupam Mishra and APN consultant Govindpant Raju

Pawan Aggarwal said “China has always supported Pakistan, but this time things are not the same as earlier. This time powerful countries like France, Russia and US are in support of India who are ready to declare Azhar- as a global terrorist.”

Anupam Mishra said “If Masood Azhar will be declared a global terrorist then it will directly benefit India and will create an international pressure on Pakistan, which will not be acceptable for China, that’s why they have asked for the evidence to prove Azhar- a global terrorist.”

Govindpant Raju said: “Though Azhar if declared a global terrorist, then also China will not be affected economically or in other way as they have invested in Pakistan very smartly, and China will definitely be careful and it will have its eyes on the international happenings.”

B Ramaswamy said “This person (Azhar) must be banned all over the world, it’s a matter of appreciation that our PM has convinced almost all the powerful country to declare Azhar- a global terrorist, and this time even China will not be able to help Azhar.”

Mishra said “We have already submitted the evidences that are sufficient to declare Azhar-a global terrorist and we had earlier also gave evidences against Azhar, who openly give threats to India and his derogatory speeches are common among the people.”

Aggarwal said “Not only Pakistan but China too is tensed after the Pulwama attack and the way India is getting support of International powers are a matter of shock for both Pak and China.”

Mishra said “India has already cleared its vision in front of United Nations that it will not tolerate terrorists and terrorism and stern action will be taken against them in any situation and at any cost.”

Raju said “Even if Azhar will be declared a global terrorist then also Pakistan will not take any strict action against Azhar and we have already witnessed this in case of Osama and Hafiz Saeed.”