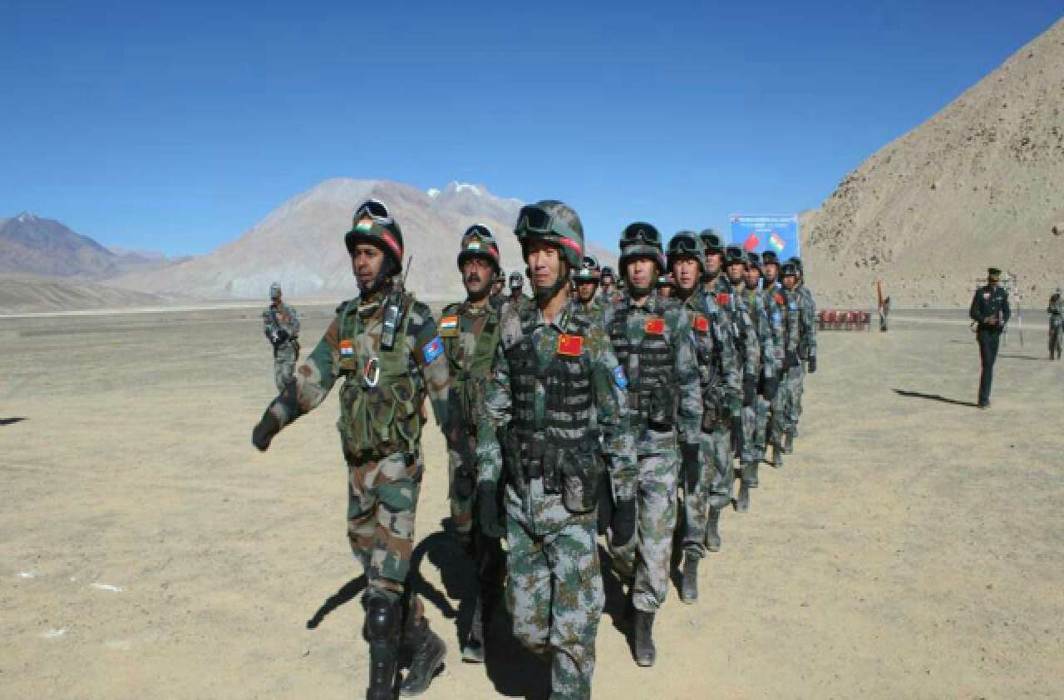 After Army Chief General Bipin Rawat accepting the continuing presence of Chinese troops in Doklam five months after the standoff with China was ‘resolved’, the Congress on Thursday accused Prime Minister Narendra Modi and External Affairs Minister Sushma Swaraj of misleading the nation, saying that India’s security and strategic interests have been compromised.

“The satellite imagery and media reports suggest that China has set up military establishments in Doklam near the Indian border which indicates that India’s security and strategic interests have been compromised,” said Congress spokesperson Randeep Singh Surjewala, addressing journalists.

“It seems that the government was snoozing while the Chinese troops occupied the Doklam plateau as suggested by satellite images. And it seems China is planning a Doklam 2.0 like retreat near the Indian border,” said Surjewala, showing satellite images.

“As far as Doklam is concerned, PLA (China’s People’s Liberation Army) soldiers are there in a part of the area although not in numbers that we saw them in initially. They have carried out some infrastructure development which is mostly temporary in nature,” General Rawat said in response to a question on Facebook Live, posted by the Observer Research Foundation (ORF), one of the organisers of the multi-lateral ‘Raisina Dialogue’ on Wednesday.

“While troops (of PLA) may have returned and infrastructure remains, it is anybody’s guess whether they would come back there or it is because of the winters that they could not take their equipment. But we are also there, so in case they come, we will face them,” he said.

General Rawat also said that neither India nor China was looking at violating the peace attained in Doklam after the disengagement between the two sides in late-August.

“I think the bonhomie (between India and China) has returned to what was prior to Doklam, so I don’t visualise a very serious trouble. But then one has to be prepared for it always,” he said.

Taking a dig at PM Modi, the Congress spokesperson said: “The Prime Minister has mastered the art of electoral rhetoric as he has failed miserably to ensure the protection of our borders.”

“Media reports and latest Satellite Imagery suggest that the Chinese Army has not only built Full-Fledged Chinese Military Complex In Doklam, but also has already occupied the entire  Doklam plateau right upto 10m from Indian Army post. The new images show concrete posts, seven helipads, new trenches and several dozen armoured vehicles close to the point  where  the  Indian  Army and  the  People’s Liberation  Army  (PLA)  troops  were  locked  in  a  72-day  confrontation  last  year. There  is  at  least  one  complete  mechanized  regiment  and  a  strong  possibility  of another  mechanized  regiment  under  camouflage  nets.  Two  major  parking  areas have been observed for tank transporters of smaller sizes. There is also a very tall observation tower, at least two storeys high, constructed with cement concrete less than 10 metres from the most forward trench occupied by the Indian Army,” said Surjewala, asking “ Is the Modi Government, especially the Defence Ministry, aware of this presence?” 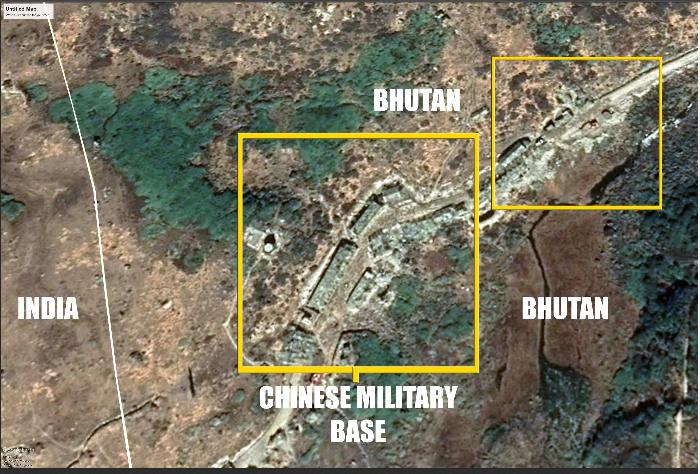 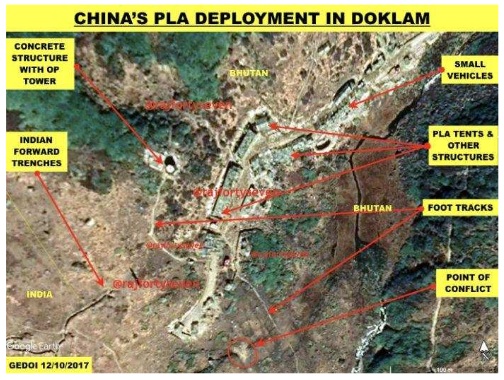 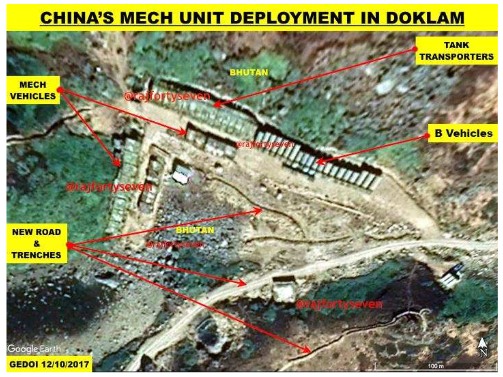 He said “What is the government doing as China has occupied the entire Doklam plateau?”

Slamming Sushma Swaraj, Surjewala said the Ministry of External Affairs issued a statement in August, saying the troops of both the countries were doing expeditious disengagement.

“Even Sushma Swaraj ji said (this) in Parliament. And when we asked about the details, she said the troops of both countries were returning to their posts. At that point, there was no reason to question her statement,” he said.

He said after the tensions at Doklam were resolved, the Chinese Foreign Ministry had said that while it had withdrawn the troops, it would keep on patrolling the area.

The Congress leader demanded to know how the issue of tri-junction at Doklam would be decided in future when China had occupied the entire plateau.

Surjewala said: “In October, Modiji announced at a public rally the Doklam issue as a victory. However, the satellite imagery released in media reports suggest that Chinese troops have constructed military establishments.”

He said ahead of the 2014 Lok Sabha elections, Prime Minister Narendra Modi had made several insinuations at the Congress party and spoken about showing red eyes to China. “Now the number of faceoffs with the Chinese on the Line of Actual Control (LAC) shot up by 48 per cent last year,” he said.

“There were 415 transgressions by Chinese soldiers into the Indian side of the LAC in 2017 as against 271 in 2016. What does it say about Modi’s empty rhetoric at election rallies?” he questioned.

Surjewala said the Congress party would always press for disengagement of conflict in Doklam between India-China-Bhutan through “diplomatic means” in a manner that protects India’s strategic interests in toto and avoid unwarranted provocation of conflict.

Indian and Chinese troops were engaged in a face-off at Doklam near the Sikkim-Bhutan-Tibet trijunction for over three months last year. After the standoff was declared to have been resolved in August, there were several reports about the continued presence of Chinese troops and semi-permanent infrastructure there.

It seemed that while India may have prevented China from extending its existing road in Doklam further towards India, there is now almost permanent stationing of People’s Liberation Army (PLA) troops in the region. Earlier, Chinese troops would come to the area and go back after marking their presence to claim the disputed area. True, at the faceoff site, the status quo continues.