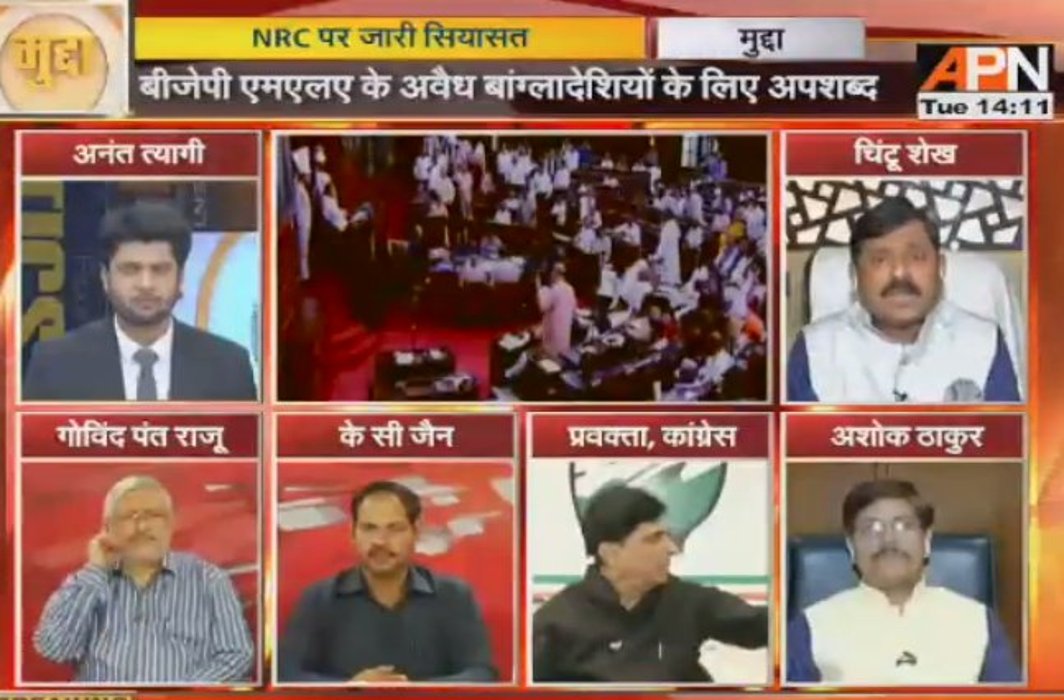 Panellists feel that dealing with illegal migrants is a humanitarian crisis; issue raked up due to nearing of elections

In an address cut short by opposition slogan shouting from the well of the House, BJP chief Amit Shah said the NDA government had been able to do what the UPA could not.“The National Register of Citizens (NRC) was in the spirit of the 1985 Assam Accord which sought to identify illegal migrants into Assam and prepare a list of Indian citizens,” he said. Parliament has been witnessing ruckus over the migrants issue.

Anant asked Jain why people who are not Indian citizens should stay in India. Jain said: “This issue has become big due to the general elections next year. The migrant issue is actually a humanitarian crisis.”

Thakur said: “The Congress is playing with Muslim sentiments. How come all Muslims are foreigners? The BJP does not think so. Assam has witnessed huge agitations regarding this, and Rajiv Gandhi had proposed a register to deal with the crisis. But now it seems that the Congress is more involved with Pakistanis, Bangladeshis and Rohingyas.”

Sheikh said: “Whoever is staying illegally should be driven out. Forty lakh illegal migrants is a huge number.”

Omkar Nath said: “It was decided that those who had come in till 1971 were Indian citizens, and the rest had to be driven out. However, if Bangladesh does not take back its migrants, what can India do? There will be a lot of genuine citizens who might not be able to provide the documents and papers.”

Raju said: “This is an issue that can swing the vote bank. Trinamool’s Mamata Banerjee, the Congress and Muslim political parties want those excluded from the citizenship list to be included now. But it looks like the issue has been raised for vote bank reasons.”

Omkar Nath said: “The BJP is saying that Hindu, Buddh, Jain, Parsi will be given citizenship…but why is the BJP targeting a particular community?”

Thakur said:”If SC is saying there are 40 lakh migrants, what’s the problem with the opposition?”

Sheikh said:”There should be no pressure on SC. How long shall Muslims remain soft targets? Muslims should live like APJ Kalam, and Hindus like Swami Vivekanand.”

Omkar Nath said: “There is something wrong in the calculations, and  the number of illegal migrants is getting fudged.”

Raju said: “Provisions are in place for people to prove their citizenship. Why is there such politics going on in the community breakup? Politicians are fighting over half-truths.”

Sheikh said: “The Shiv Sena is clear on this. Illegal migrants should be out, whether they are 40 lakh or 4 crore.”

Thakur said:”SC is monitoring, a month has been given to prove citizenship. I agree with Raju that politicians should come to the aid of those who are finding it tough to gather the papers to prove their citizenship.”

Omkar Nath said: “If Bangladesh refuses to accept the migrants back, what shall India do? We are as much Hindu as others; let not the BJP show that only they are with Hindus, and portray others as playing politics.”

Anant mentioned to Thakur the shocking comments by BJP MLA T Raja Singh who suggested that “all illegal immigrants” in the country should be “shot down” .

To this, Thakur said: “Raja Singh is a legislator. If he’s saying illegal migrants should be killed if they don’t go back, that’s his personal view. Certainly, that can’t be the BJP official line. It is better to understand the sentiments in such case. I condemn such remarks.”