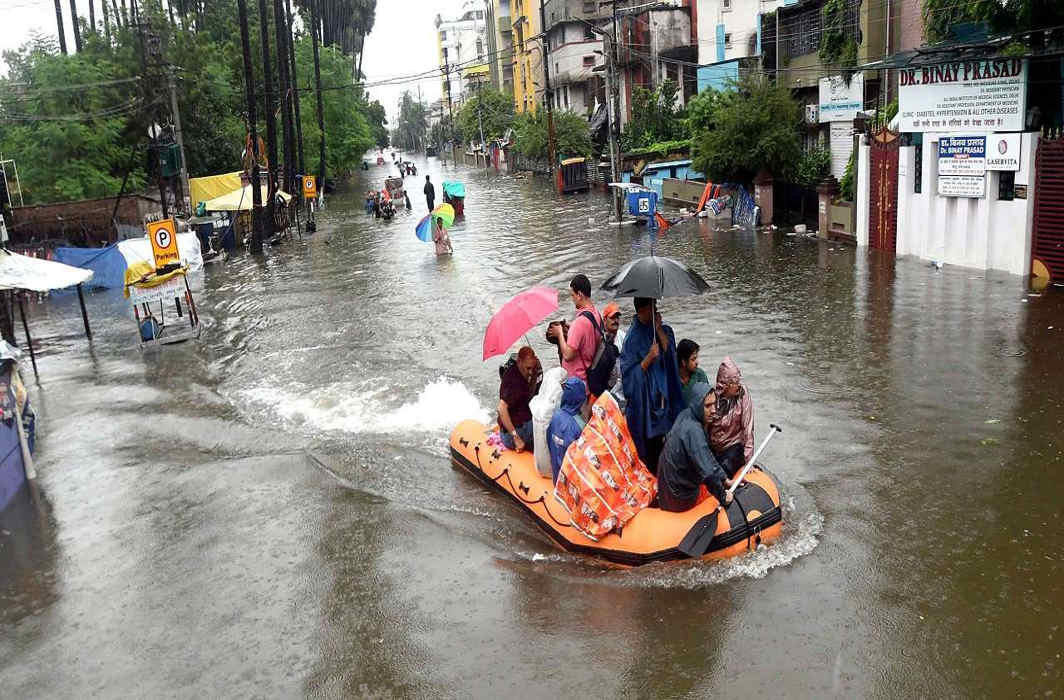 Torrential rains wreaked havoc in Bihar, submerging the state capital of Patna and flooding several districts as the monsoon refused to retreat – yet another phenomenon signalling that climate change is here and brings with it a retribution in which those least responsible for it suffer the most.

Reports said 29 lives have been lost in Bihar alone and over 130 across India in rain-related incidents since the last weekend. Bihar has suffered massive damages to infrastructure in many districts till Sunday and was in for another spell of battering as the Indian Meteorological Department (IMD) has retained its ‘red colour’ warning of heavy to very heavy rainfall in the state.

Monsoon, which normally withdraws around September-end, will continue to stay around till mid-October, said IMD director general M Mohapatra on Sunday.

Patna, reeling under knee-deep water on Sunday due to the sudden spurt in late monsoon rainfall and reported to be the worst hit, might face more misery if the water level in Punpun river rises further.

At least 134 people have died in rain-related incidents across the country in the past three days, with Uttar Pradesh reporting the maximum cases, said reports citing data from the state disaster relief departments.

Twenty-two interstate trains have been cancelled in as many days due to rain, an Indian Railways spokesperson said.

The latest spell of rainfall is due to extended low pressure areas creating monsoon trough in different parts of the country, which would result in more showers in the next five days, according to the IMD.

In Bihar, deaths were reported from the worst-affected Patna, Bhagalpur and Kaimur districts in the last 24 hours. Several areas in the state capital were inundated on Sunday, with the city receiving 152mm of rain the night before. Government hospitals and buildings — including the city’s second largest medical facility, the Nalanda Medical College Hospital — were waterlogged.

A bird’s eye view of Patna made the city appear like a huge lake dotted with concrete structures, said a NDTV report. Posh low-lying areas like Rajendra Nagar and Pataliputra Colony were flooded. Private hospitals, medical stores and other shops were submerged in waist-deep water. Visuals showed flooding at Nalanda Medical College Hospital, the second largest healthcare facility in the city.

The state disaster response force was deployed for rescue efforts and installed additional pumps across the city to flush out water, officials said.

According to the weather department, the state capital has received more than 200 mm of rainfall since Friday evening, which was described by principal secretary, disaster management department, Pratyay Amrit as “totally unexpected”.

Amrit said 15 districts where more rain is expected in the next 24 hours have been put on alert and all schools have been closed till Tuesday.

In the desert state of Rajasthan, three students were killed when a government school’s wall collapsed after excessive rainfall in Udaipur district. The incident occurred early on Friday morning in Government Middle School, Thobwara. The school, which is situated on the foothills, was waterlogged due to excessive rainfall on Friday night, the police said.

Madhya Pradesh has been witnessing heavy rainfall over the last couple of weeks. Three persons, including a police constable, were swept away in the strong currents of a swollen nullah in Seoni district, police said. The incident occurred on Ghansor-Kedarpur Road on Friday night. The three bodies were recovered about a kilometre away from the place of the incident.

In Jammu and Kashmir’s Samba district, a 22-year-old woman was killed after she was struck by lightning. Heavy rains lashed wide parts of the Jammu province, causing waterlogging and traffic jams at many places in the city disrupting normal life.

In Himachal Pradesh, parts of the state received light rainfall on Saturday which brought the maximum temperature down by two to three notches below the season’s average. Mandi received the maximum rainfall at 36 mm in the 24 hours ending at 5:30 pm on Saturday, followed by Kufri (28 mm), Salooni (25 mm), Kandaghat and Bakloh (22 mm each), Baijnath (19 mm), Solan (13 mm), Shimla (12.3 mm) and Manali (11 mm).

In the South, the Krishna river is in spate again following heavy rain in the upper catchment areas in Maharashtra and Karnataka. Consequently, the crest gates of major dams that were already full to the brim in Andhra Pradesh had to be opened for the third time in the last couple of months to let out floodwater into the Bay of Bengal.