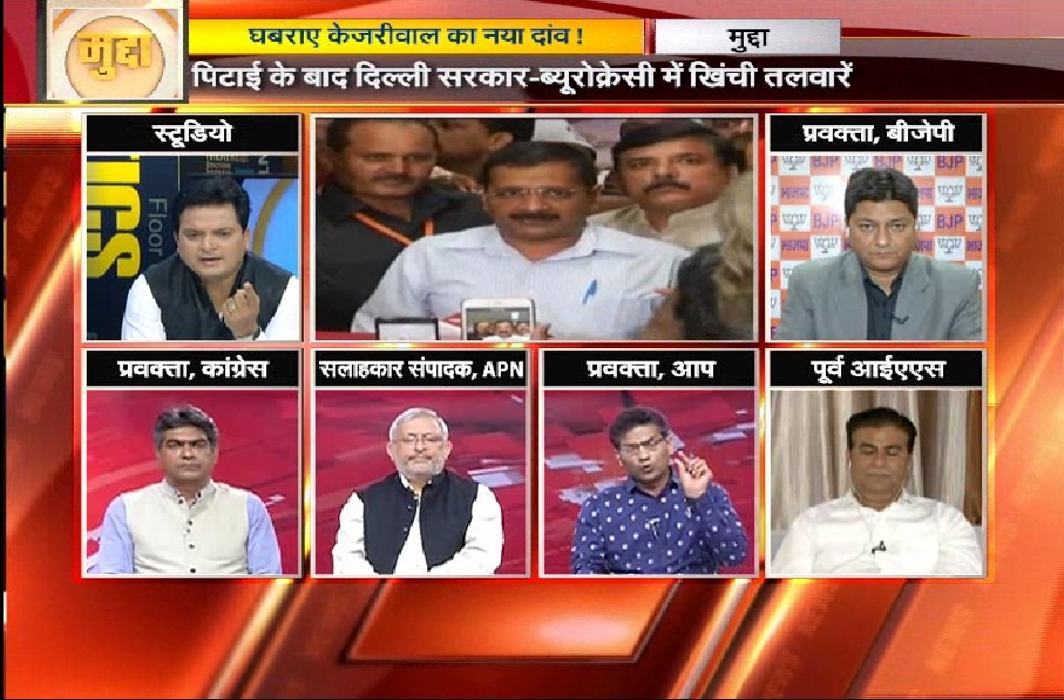 Mudda panellists feel that a week after the fracas in Kejriwal house, the silence of the Delhi chief minister sets off a disturbing trend

In a shocking sequence of events, Delhi Chief Minister Arvind Kejriwal’s aide and Aam Aadmi Party (AAP) MLA Amanatullah Khan allegedly assaulted Delhi Chief Secretary Anshu Prakash in a meeting a little past midnight, a week ago. Chief Minister Arvind Kejriwal was allegedly present at the meeting during the assault. A Delhi police team was sent to Kejriwal’s residence for collecting evidence related to an alleged assault.

While on one side, the IAS officers association has been demanding the CM’s apology over the incident, on the other hand AAP MLA Naresh Balyan has been booked for making “inflammatory” remarks against Delhi government officials. APN’s Mudda took up the issue of the stalemate in the Delhi government.

Tripathi said that the IAS association should back off.  Naqvi pointed out that AAP is yet to come out of andolan mode. “The problem with Delhi is that neither the BJP is mature, nor does the AAP know how to run the government. The case regarding the fracas is under investigation. A senior IAS officer is making a strong alleging. AAP thinks that whoever holds a divergent view should be beaten. What’s worse is that the LG is behaving like a BJP agent,” he said.

Singh stated that the CM should resign. Tripathi said that since the matter is under investigation, and two AAP members have been arrested, there is no need for the CM to resign.

Raju said that the problem with AAP is that it does not believe there can be any other perspective. “Goondagardi right in the presence of the CM? This is deplorable,” he said

Goyal said AAP has been trying to attack established institutions. “Why did the CM call for a meeting on ration cards at midnight? Why was the food supplies minister not there? This proves that AAP’s agenda is far different from what it is claimed,” said Goyal.

Sisodiya said that once the chargesheet is filed, only then things can become clearer regarding what actually transpired. Naqvi said that “AAP does not need to be taken seriously. Even today, a junior engineer has been beaten up by an MLA.”

When Tripathi said Balyan did not intend to threaten, Goyal said AAP believes in telling lies, adding that AAP is behaving like an “urban Naxalite”. “Why hasn’t the CM tweeted a response?” Goyal wanted to know.  Singh said Kejriwal never complained to LG regarding the chief secretary. “How important is the ration card issue to call the chief secretary at midnight?” he wanted to know.

Akshay said if Kejriwali is aam admi (common man) as he claims, what’s the problem in apologising? Raju said CM should try to defuse the tension now.

Sisodiya said that court will examine evidence of defence and prosecution. “Unlike other states, Delhi is very different. The CM has no power over land, police and personnel. All over the world, Centre exudes full power in the Capital. Therefore, Delhi government has far lesser power than other states. Delhi government should look at municipal issues. Due to the lofty intention of AAP to finish corruption, and the fact that the bureaucracy is under centre, an atmosphere of tension permeates in Delhi.”

Akshay said nothing of this sort was happening in the term of Sheila Dikshit. Naqvi said if the bureaucracy is insulted, they will revolt. Such points should be considered by the political bosses. “Why indulge in violence? Kejriwal is himself a learned man and should not have encouraged violence,” he added.

Tripathi said he can’t say if the CM will apologise. “My party is on the right path, which is why it is suffering,” he said. Singh said at least a formal meeting should have been called by the CM to sort out the issue. “AAP is a new party and should have been innovative in its approach in dealing with crises,” he said.