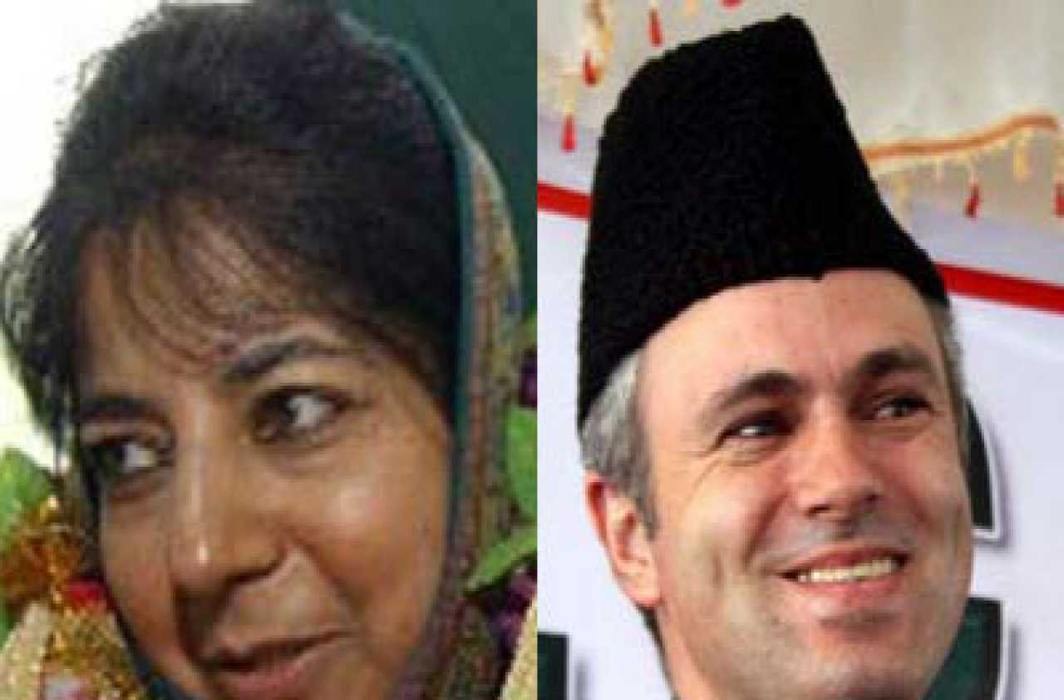 The Congress and the two major regional parties and arch-rivals of Jammu and Kashmir – People’s Democratic Party (PDP) and National Conference (NC) have had talks to join hands and discussed the possibility of meeting the governor to stake claim to form government.

The move is seen as intended to pre-empt manoeuvrings of Sajjad Gani Lone, separatist-turned-mainstream-politician who shares a cosy relationship with the BJP. Since the BJP-PDP government in J&K fell on June 16, Lone and disgruntled PDP leaders have been in talks to form a third front with the BJP to form government in Kashmir. Lone was aiming to become the chief minister of the state.

The BJP, with 23 seats in the state assembly, has been relying heavily on a split within the PDP, said media reports. The state is currently under Governor’s rule which cannot be extended after it completes its six-month period on December 19.

The “talks between the three parties are at an advanced stage, in order to stymie the BJP’s attempts to take power after engineering defections,” reported NDTV, quoting sources.

The report also claimed that the Congress leadership has “approved a grand alliance with Mehbooba Mufti’s PDP and Omar Abdullah’s National Conference to checkmate the BJP in the state where six-month central rule ends next month.”

“An announcement is expected today or tomorrow,” it claimed.

Meanwhile, former Jammu and Kashmir chief minister and senior Congress leader Ghulam Nabi Azad confirmed that talks were going on among the three parties over government formation in the state.

“Hum parties ka yeh kehna tha ki kyu na hum ikatthe ho jaye aur sarkar banaye. Abhi vo stage sarkar banne wali nahi hai,ek sujhaav ke taur par baatcheet abhi chal rahi hai (We [NC, Congress, PDP] thought why not to unite and form a government together. Talks are going on but as of now it is only a suggestion…We haven’t reached that stage yet where we can form the government),” said Azad, according to ANI news agency while responding to queries on potential Congress-PDP-NC alliance.

Altaf Bukhari, senior PDP leader and former finance minister of J&K, was quoted by The Wire as saying on Wednesday that the party leadership has conveyed to him that an alliance will be formed with Congress party and NC. Bukhari reportedly spoke to media after a meeting with former chief minister Omar Abdullah at his residence.

“This is a move to safeguard the special status of the state. Between 55 and 60 MLAs are with us,” the PDP leader said. “Our identity is under attack. Articles 370 and 35A are under attack.”

Leaders of the three parties were reported to have held week-long “informal meetings” to chalk out a strategy to form a government.

PDP has 28 seats in the state assembly, National Conference has 15 and Congress 12. The three parties together make it to 55 against the required number of 44 in the 87-member house.

Senior PDP leader and former Finance Minister Altaf Bukhari is seen as the frontrunner for the post of chief minister, said reports. While PDP president Mehbooba Mufti wanted Farooq Abdullah to lead the alliance, National Conference has decided not to be part of the government and support the PDP-Congress alliance from outside, said a report in The Indian Express (IE), quoting sources.

A senior National Conference leader told IE that the two rival parties have joined hands to protect the special status of Jammu and Kashmir.

A senior leader said that while the three major political parties have decided to cobble alliance there is every apprehension that Centre would ask the governor to dissolve the assembly thus stalling the process. “We are happy both ways,” he said.

“We have had several informal meetings with the two parties (NC and PDP) this week and there are many reasons for this. The governor has hinted at keeping a status quo, which means he will not dissolve the assembly and keep it in an animated state, thus avoiding a fresh election. President’s rule will be imposed soon and it would have been ideal to dissolve the assembly but this has not happened. Instead, the BJP is attempting to break regional political parties and form a new alliance,” the leader said.

J&K Pradesh Congress Committee president GA Mir said, “The Congress Party is in no rush to form a new government. We have struggled for last four years and will continue to do so but we will also not stand by while BJP tries back channels to form a new government which does not have the mandate of the people.” He added that the possibility of a formal meeting will be decided by the two major parties this week.