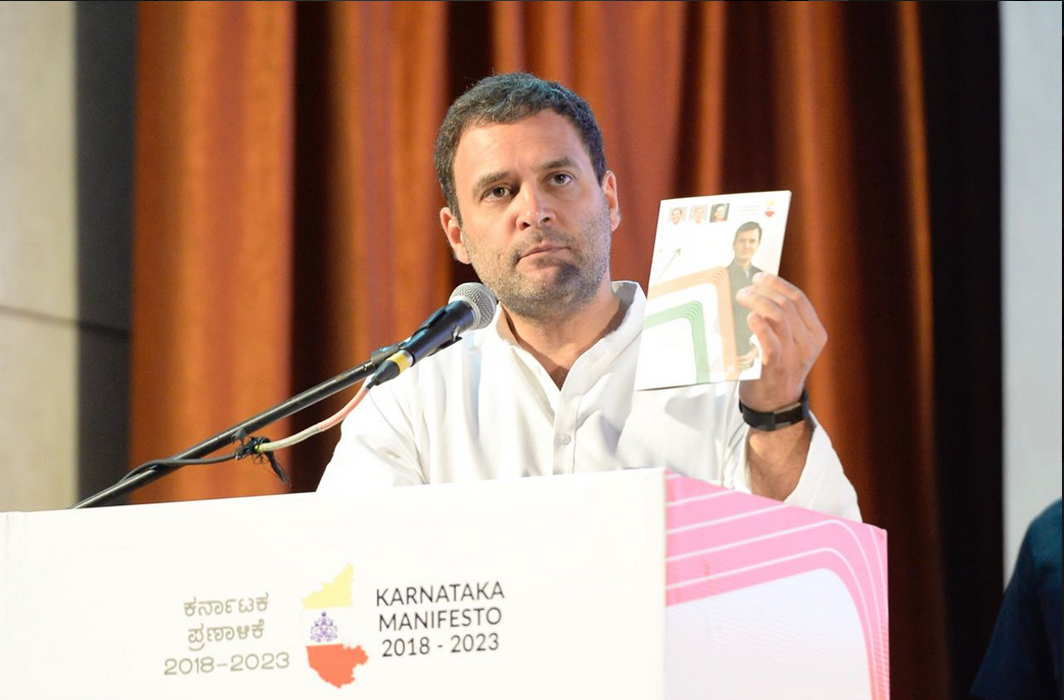 Congress president Rahul Gandhi released the party’s manifesto for Karnataka elections at Mangaluru, away from the state capital Bengaluru, on Friday, April 27, promising one crore jobs in five years.

Rahul called it the ‘Mann Ki Baat’ of the people of the state. “This manifesto is unlike Prime Minister’s Mann ki baat, where he reveals what he likes to do,” Rahul said while releasing the manifesto which he called the voice of Karnataka.

He took a swipe at BJP, saying that while their manifesto is decided by three-four BJP leaders in a closed-room, the Congress party’s manifesto is the expectations of people from the government. The manifesto committee had interacted with communities, at block and district level in order to listen to what is good for them.

Rahul said the BJP  manifesto is not of people of Karnataka it is the manifesto of RSS. “BJP’s manifesto is what they think is good for Karnataka. Their manifestos includes corruption, about Reddy brothers,” he charged.

Unlike Modi or BJP who did not stand up for truth, Congress manifesto has weight, it means something and has stood upto the ideals of philosopher Basavanna. “True to Basavanna’s saying, `Nudidanthe nade, 95 per cent of assurances made five years ago had been implemented. The budget is committed to welfare of farmers,” said Rahul, according to a report in The New Indian Express (NIE).

He took to Twitter to say: “We released the Congress Manifesto for Karnataka earlier today. It captures the “Mann Ki Baat” of the people of Karnataka and makes very specific commitments that we intend to deliver on, including creating 1 Cr. new jobs over the next 5 yrs.”

We released the Congress Manifesto for Karnataka earlier today. It captures the “Mann Ki Baat” of the people of Karnataka and makes very specific commitments that we intend to deliver on, including creating 1 Cr. new jobs over the next 5 yrs. #NavaKarnatakaManifesto pic.twitter.com/hktUWrpeiI

Chief Minister Siddaramaiah recollected that after elections the governments dumped the manifestos in waste bins. “Having implemented 99 per cent of programmes listed in Budge, this government does not face any anti-incumbency wave,” he asserted, said the NIE report.

“Karnataka is a progressive state and this manifesto is a big step in taking the state to the next level. We will win the election and ensure that our Government will fulfill the promises made in the manifesto,” he added.

He congratulated Mangaluru for ‘upholding secular principles’ and ‘foiling Modi’s grand plans to turn the coastal districts into a Hindutva laboratory’. Of the total 19 seats in three coastal districts, Uttara Karnataka, Udupi and DK districts, Congress had won 13 seats and BJP had won just four seats. “This time also we will win more seats,” he declared.

Vijay Mallya says it’s his “democratic right to vote”, but he “cannot travel”

Away in London, Vijay Mallya, the billionaire accused of fleeing the country after defaulting on loans and facing extradition proceedings in a UK court, said that it is his democratic right to vote in Karnataka but he “cannot travel”.

The liquor baron was at a UK court for the hearing on India’s request for his extradition. He has argued against being dispatched to India on grounds that the jails are in very poor condition, said a NDTV report.

“It is my democratic right to vote in Karnataka but as you know I am here and cannot travel. I had the proud privilege of representing Karnataka but I am far removed now… I haven’t been following the politics so closely,” said the 62-year-old, reported the NDTV.