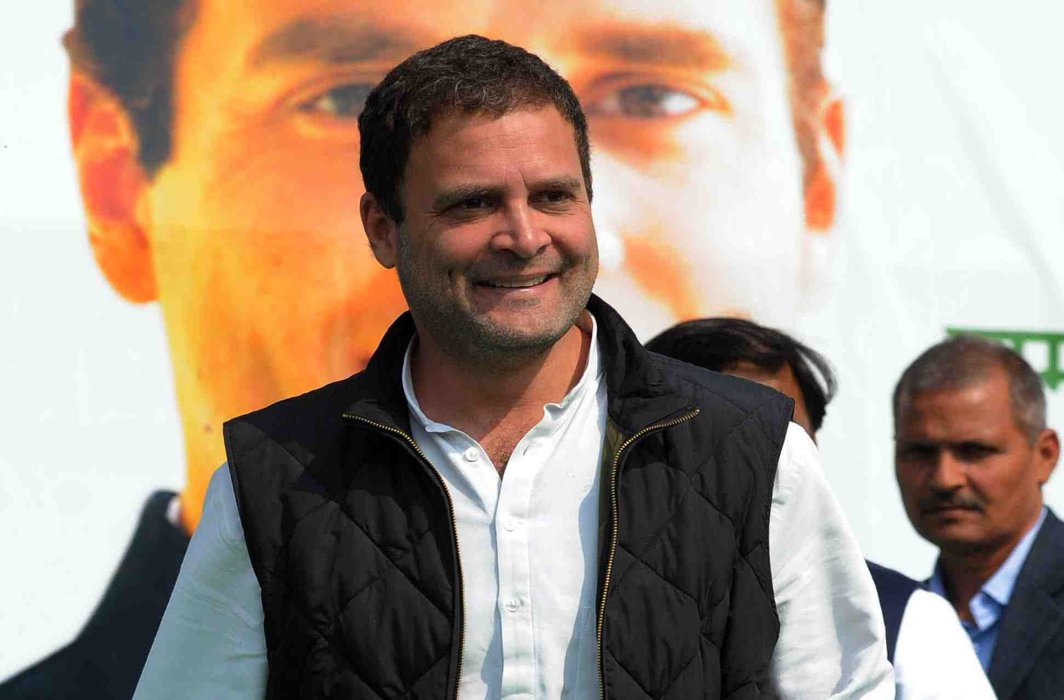 A day after the Parliament witnessed uproarious scenes by a united Opposition which demanded an apology from Union minister Anant Kumar Hegde for suggesting that the BJP had come to power “to change the Constitution”, Congress president Rahul Gandhi, on Thursday, exhorted his partymen to defend the Constitution, claiming that it was under threat.

Rahul, who was addressing his party colleagues at an event organised at the AICC headquarters to celebrate the 133rd Foundation Day of the Grand Old Party, said: “The Constitution, the foundation of our country is under threat, it is under attack directly – statements are being made by senior members of BJP – and it is under attack surreptitiously. It’s our duty, duty of the Congress party and every single Indian to defend it.”

The Nehru-Gandhi scion’s remarks came hours before, faced by an unrelenting Opposition onslaught, Hegde was forced to offer an apology in the Lok Sabha for his comments against the Constitution and the mention of the word ‘secular’ in its Preamble.

In a complete volte face on his remarks made on Sunday, Hegde told the Lok Sabha: “My comment was misunderstood. I respect the Constitution and believe that it is supreme. If, however, my statement has hurt anyone’s sentiment, I have no problems in apologising for it… I deeply respect the Constitution, the Parliament and Baba Saheb Ambedkar. The Constitution is supreme for me, there can be no question on it, as a citizen I can never go against it.”

Hegde’s apology, however, was in no way made voluntarily. He had to not only be forced by the Opposition – a day after the his comments washed out a sitting of the Lok Sabha – but also be goaded by Lok Sabha Speaker Sumitra Mahajan to apologise. Soon after the Question Hour got over on Thursday, amid protests by Opposition members against Hegde, Mahajan had said: “Sometimes in life we feel what we have said is right, but others may still get hurt.”

The newly elected Congress chief also reiterated what has become his new line of attack directed at the BJP, targeting the saffron party for spreading what he called a “web of deceit”.

“What is happening today in our country is a web of deceit. The BJP operates on the basic idea that lies can be used for political benefit and it is the difference between us and them, we might not do well, we might even lose but we will not give up the truth,” Rahul said.

The Congress president had on Wednesday evening, taken a swipe at Union finance minister Arun Jaitley who had earlier in the day issued a half-apology of sorts in the Rajya Sabha over Prime Minister Narendra Modi’s controversial attack against his predecessor Dr Manmohan Singh and former Vice President Hamid Ansari. Referring to Modi’s comments, made during an election speech in Gujarat, Jaitley had said: “Prime Minister in his speeches didn’t question, nor meant to question the commitment to this nation of either former PM Manmohan Singh or former Vice President Hamid Ansari, any such perception is erroneous, we hold these leaders in high esteem, as well as their commitment to India.”

Jaitley’s cleverly worded clarification, which didn’t exactly demolish Modi’s allegation that Dr Singh, Ansari and the Congress party were hatching a conspiracy with Pakistan against him and the BJP, had however helped end the logjam in Rajya Sabha which had been caused by the Congress’ demand for an apology from the Prime Minister and the Centre on the issue.

While the Congress decided to accept the half-baked apology and allow Rajya Sabha to resume its legislative business for the few days remaining before the end of the winter session, Rahul took to Twitter late Thursday evening to say what he really felt of Jaitley’s remark.

Dear Mr Jaitlie - thank you for reminding India that our PM never means what he says or says what he means. #BJPLies pic.twitter.com/I7n1f07GaX

Punning on the finance minister’s surname – addressing his as “Dear Mr Jaitlie” – Rahul said: “thank you for reminding India that our PM never means what he says or says what he means. #BJPLies.”