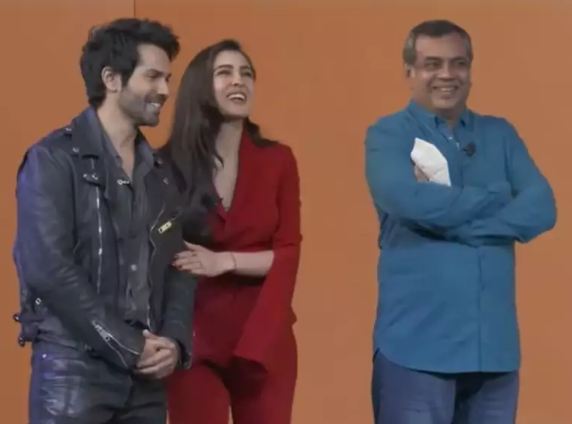 Actor Varun Dhawan said that the 1995 remake of Coolie No.1 is special to him as the film happens to be his father David Dhawan’s 45th directorial. The actor turned host at the trailer launch which took place virtually on Saturday along with co-stars Sara Ali Khan and Paresh Rawal.

As it is my father’s 45th directorial, one can expect 45 times of comedy in Coolie No.1 said Varun adding that, the film aim to make all laugh as 2020 has been a hard year. The film is a family entertainer and they are here to bring fun and cheer in the lives of their fans, the actor added.

Introducing Sara as the most hard-working actor, Dhawan said she has given her best in the film. Sara revealed she has watched the film twice, once later in her childhood and when she was offered the film. She also mentioned one scene which she remembers is the suhagraat scene from the movie.

On working with ace actors like Paresh Rawal, Johnny Lever and Rajpal Yadav, Sara said the experience was amazing. Under David Dhawan’s guidance, she felt no pressure. Further talking about the film, the actor said she cannot wait to spread joy and positivity with this film, which this year genuinely needs.

David Dhawan, on the other hand, sent a special message for the viewers in the form of a video clip, which played during the virtual event. In which the filmmaker was heard saying that, 25 years back he made Coolie No.1 with the amazing actors like Govinda, Karishma Kapoor and late Kader Khan. He had a fabulous journey of 45 years. Throughout his career he made the films for the big screen but this time, he presents it directly to home, added the director.

Varun and Sara also performed on a track from the film called Hatt Ja Samne at the trailer launch. During the event, the team also took media questions.

When asked what aspect of old film does the new film retains, Varun said the screenplay written by Rumi Jaffery and Kader Khan in original Coolie No.1 was outstanding, hence, they have retained it. Apart from it, the new film has its own journey, said the actor.

Paresh, who previously has been part of many films directed by David said he loves to work with the director because of his clarity and sense of proportion. He said David’s comedy is never over the top, rather it is a great mix of Hrishikesh Mukherjee and Manmohan Desai.

Meanwhile, Coolie No.1 is the official remake of David Dhawan’s 1995 hit film which starred Govinda and Karisma in lead roles. Produced by Vashu Bhagnani, it is slated to release on December 25 on an OTT platform.