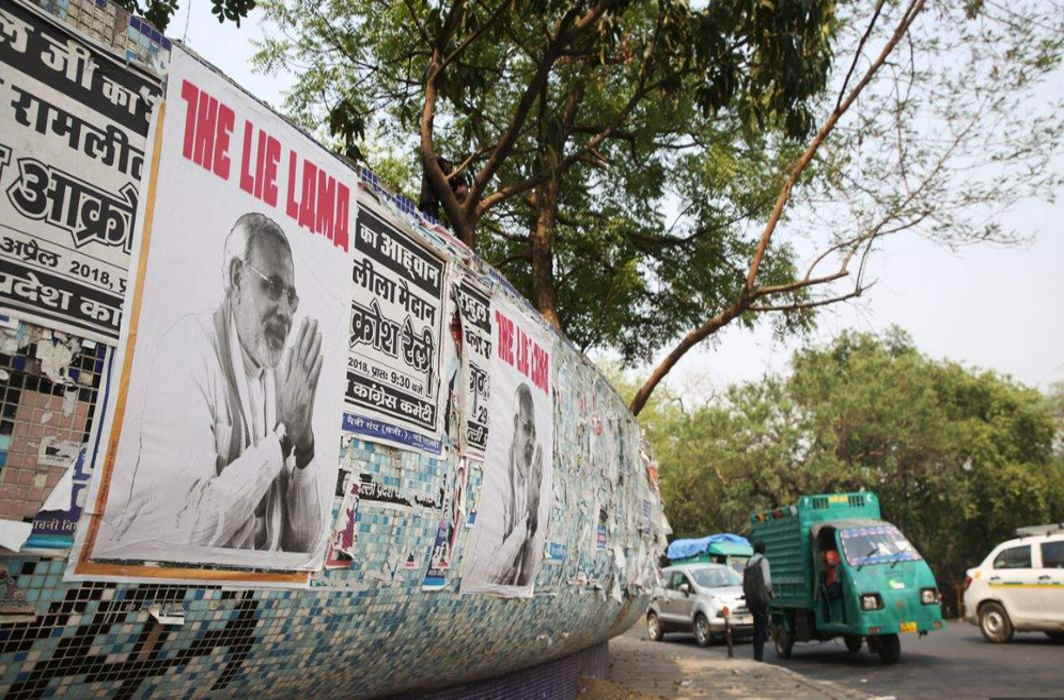 Delhi police have registered a case for defacing boundary walls by pasting posters of Prime Minister Narendra Modi carrying the tagline “The Lie Lama”, a sarcastic take giving a name that rhymes with ‘Dalai Lama’, the Tibetan spiritual leader.

The case has been registered against unknown persons and the complainant’s identity has also not been revealed by the police, said media reports.

“After learning that such posters had been plastered on a wall in Mandir Marg near Connaught Place and two other places, we immediately alerted our police team,” a senior IPS officer posted at Delhi police’s headquarters was quoted as saying in media reports.

The cops are probing the case to identify those who pasted the posters. Images of the posters went viral on social media on Thursday afternoon.

While most of such posters were from Delhi, some Twitter users said similar posters were seen in Karnataka too.

Karnataka is voting today, Saturday, May 12 and the posters, showing a smiling Modi with his hands folded, come at a time the PM has been accused of making several incorrect comments and historically wrong statements during the Karnataka election campaign that ended on Thursday.

On Wednesday, Modi had alleged that Congress leaders had not visited freedom fighters Bhagat Singh and Batukeshwar Dutt in jail. The Congress replied by citing historical documents that refer to Jawaharlal Nehru and other senior party leaders visiting Bhagat Singh in prison.

“Go and read history before misusing it for politics. Nehru not only met them in prison but also wrote about them. Several Congress leaders defied Gandhi to speak for them,” historian S. Irfan Habib had tweeted after Modi’s claim.

Go and read history before misusing it for politics. Nehru not only met them in prison but also wrote about them. Several Congress leaders defied Gandhi to speak for them. https://t.co/IMr2vTpSnW

‘Nehru insulted General Thimayya in 1948 after the Indo-Pak War’

Speaking at an election rally in Kalaburgi, Prime Minister Modi said “Karnataka is synonymous with valour. But, how did the Congress Govts treat Field Marshall Cariappa and General Thimayya? History is proof of that. In 1948 after defeating Pakistan, General Thimayya was insulted by PM Nehru and Defence Minister Krishna Menon.”

Many including historians and pandits pointed out the factual inaccuracies in the statement.

On May 6th, addressing a rally in Bagalkot of Karnataka, Modi said, “The arrogance of Congress party is at its peak, a Dalit mother’s child, raised in a village became the President (Ram Nath Kovind), and it should have been their responsibility to make a courtesy call, but they did not like it. It has been a year, but Madam Soniaji did not get time to make a courtesy call to the President, his Prince (Rahul Gandhi) met the President seven months later and that too to hand over a memorandum.”

The fact of the matter is both Sonia and Rahul congratulated Ramnath Kovind on his election victory, on the day of the result itself.

‘Sonia, Rahul did not congratulate BJP on 2014 election win’

Addressing a rally in Bagalkot on May 6th PM Modi said “It has been the tradition that those who lose in elections accept the defeat and the peaceful transfer of power. But after 2014 Lok Sabha election results, Congress politicians, the mother and son, did not even have the courtesy to congratulate the party that won,” he said, referring to then Congress president Sonia Gandhi and Rahul Gandhi.

In fact, both Sonia and Rahul had congratulated the BJP and the then Prime Minister-elect Narendra Modi on the election victory, even before all the results were officially out.

As PM Modi took to hectic campaigning in the final phase, such statements came fast, one after the other, exposing him to attacks. The posters appeared soon after.