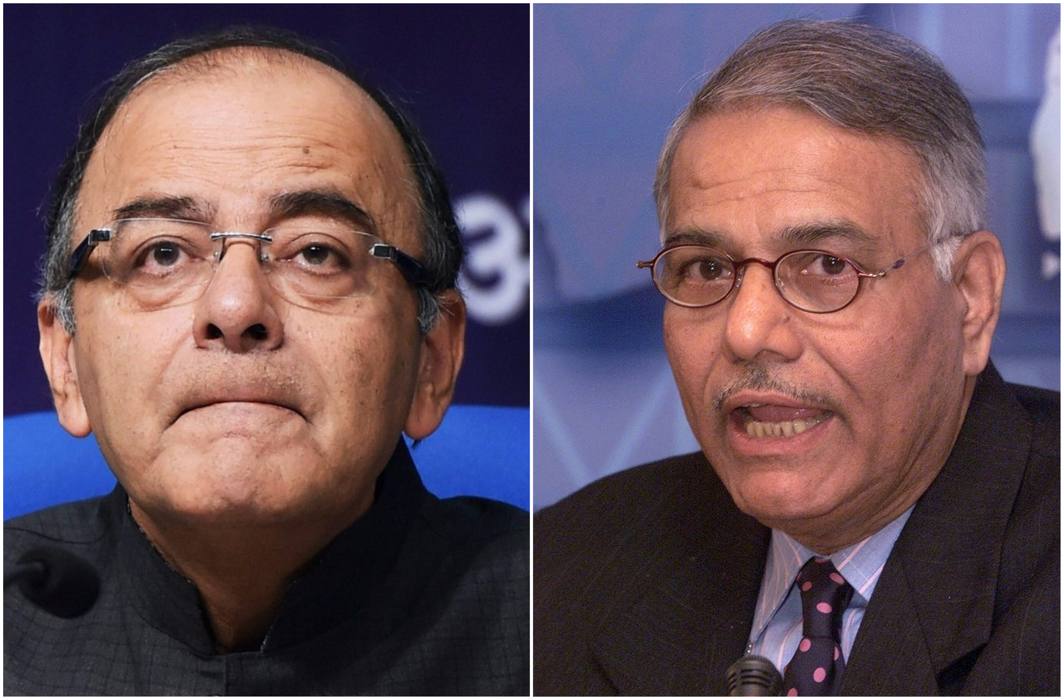 The veteran BJP leader said there is an utmost need to speak about the country’s “worrying” economic situation.


Hitting out at Arun Jaitley – yet again – veteran BJP leader and former Union Minister Yashwant Sinha on Tuesday said that the country can ask for the Finance Minister’s resignation over the “failures” in the implementation of the demonetisation policy and Goods and Service Tax (GST) regime.

Refraining from making any political comments, the veteran leader said that the policy decisions of the central government have “slowed down the economy” – and there is an utmost need to speak about the country’s “worrying” economic situation.

Addressing a press conference – organized by Gujarat-based group, Lokshahi Bachao Andolan – Sinha discussed the impacts of the GST and demonetisation on the Indian economy.

Sinha – who is on a three day visit to the poll bound state – said, “The people of India can demand the Finance Minister’s job for a slowed down economy and failures of the demonetisation and GST. The present government received some problems from the previous government, which badly needed to be addressed. Those were the non performing assets (NPA) of the banking sector and the stalled projects of over Rs 2-25 lakh crore in the country.”

“During the three and a half years, the stalled projects have decreased a little bit, but projects worth Rs 17-18 lakh crore are still stalled. Old projects have not moved forward and no new projects have been taken up. The NPAs of around Rs 8 lakh crore still remain to be addressed. Due to this the growth rate has fallen. During the last quarter of the UPA government the growth rate was 4.7 per cent, which according to the current modified calculations is 6.5 per cent. The present growth rate is 5.7 per cent, which actually when calculated as per the old method is 3.5 per cent,” he added.

The senior leader further claimed that despite government’s promises to provide 2 crore jobs annually, 20 lakh people became jobless due to the negative impacts of demonetisation. He further stressed that Prime Minister Narendra Modi’s aim – to curb the circulation of black money in the country through demonetisation – has not been fulfilled.

Sinha – who has been in news for criticising the Modi government’s economic policies – also lashed out at Jaitley for calling Congress vice-president Rahul Gandhi “childish” for demanding a single tax rate under GST.

“Go back in history and you will find that Arun Jaitley himself had said that we will progress towards a single tax structure. That is what he had said. But when others are saying it, it is childish, and when he said it, it was mature,” said Sinha.

However, Sinha stated that while the GST could have been positively effective, its implementation has escalated the hardship of the common men.

“I believe that GST is an effective tax system, that is the reason why I, too, promoted it when I was heading the Finance Ministry. But the way GST was implemented now, it only increased the hardships of the people,” said the former Finance Minister Yashwant Sinha.