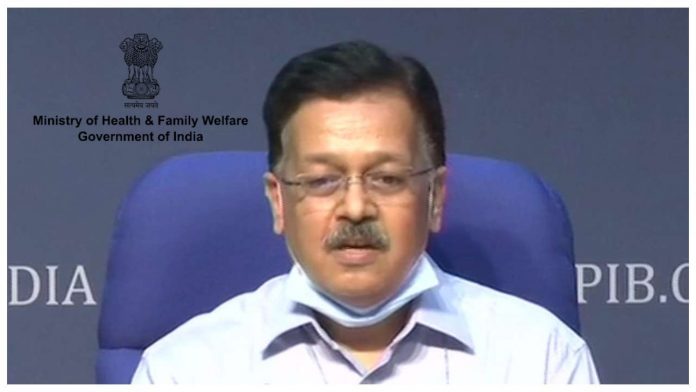 Bhushan said the Case Fatality Rate (CFR) is continuously declining. It was 2.15 per cent in the first week of August. It now stands at 1.70 per cent compared to the global average of 3.04 per cent, he said. The Indian Council of Medical Research (ICMR) said that over 5 crore samples have been tested for Covid-19 in India so far. Bhushan said the number of Covid-19 cases per million population in Brazil and the US was 6 times that of India.

According to the Ministry, India on Tuesday registered 75,809 Covid cases and 1,133 deaths. The overall Covid tally reached 4,280,422 and death toll to 72,775. The active cases have climbed to 883,697 whereas over 3.3 million have recovered so far. The daily count of new cases had been over 90,000 over Monday and Sunday, which was an alarming development.

Recently, India overtook Brazil to become the nation with the second-highest number of Covid-19 cases. Brazil, which now stands at third position, has over 4.1 million cases whereas the United States, which continues to be worst hit from the pandemic, has over 6.4 million cases.

Read Also: Arunachal villagers walk 157 km with patient for 5 days to get to hospital

On the other hand, as per medical experts and government officials, the careless behaviour of people and complacency is leading to a spike in Covid cases in India. Amid all this, the Delhi Metro resumed its services on Monday after over five months since they were suspended as part of measures to ensure social distancing to check the spread of the pandemic. The Delhi Metro is due to extend services on other lines, including the Noida line from Wednesday.