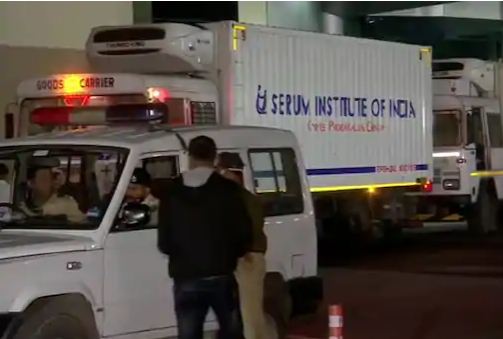 Four days before mass inoculation drive against Covid-19, three trucks from Pune’s Serum Institute left with the first batch of Covishield vaccine for 13 cities in the wee hours of Tuesday.

Amid tight security, all three trucks containing vaccines were temperature controlled which left for Pune airport, where the special cargo plane was waiting to transport them across the nation. A short puja was also performed before the vehicles left the facility.

From the airport, the Covid-19 vaccines will be dispatched to 13 cities. The first consignment contained 478 boxes of the vaccines, each box weighing 32kg, reported news agency PTI.

Sharing the news, Pune Airport tweeted, Ready get set go! Stand by India!.The vaccine to kill the disease is being loaded into the aircraft for distribution all over the country now, read the post.

The first consignment of the vaccine has been dispatched from the facility of Serum Institute of India here. We have made elaborate security arrangements, said Namrata Patil, DCP (Zone 5) Pune.

Around 8am, a SpiceJet flight carrying the vaccines left for the national capital.The Chairman and Managing director of the airline, Ajay Singh said the multiple consignments to different cities will be carried out through the day and the Spicejet is proud to assist the biggest vaccination drive in the history of mankind. The airline is fully committed and prepared to transport the vaccine both outside and within the country.

The Centre had signed the contract with Serum Institute of India(SII) for the supply of 11 million doses of Covishield vaccine developed by Oxford University and pharma major AstraZeneca and planned to buy a total of 5.60 crore doses by April, at Rs 200 per dose.The country will begin its mass vaccination drive against the deadly virus on January 16.

The government has said that 30 crore people starting with around 3 crore healthcare and frontline workers will be the first in line to receive the shot.After them, the people who are over the age of 50 and people who suffer from comorbidities including diabetes and hypertension, will be administered the vaccine.

Besides Covisheild, Bharat Biotech’s Covaxin has also received the emergency use approval from the Drug Controller of India earlier this month. Both the vaccines will have to be administered at a 28-day gap.