The number of cremations has gone up from 15 per day to over 30 at Nigambodh Ghat as COVID-19-related deaths in the national capital continue to rise. 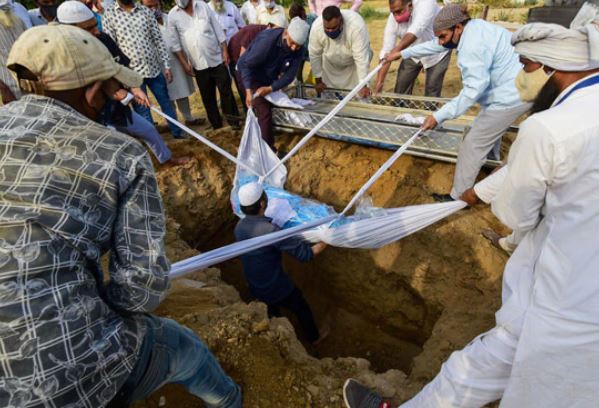 As Covid death mounts, the crematorium and burial grounds in the national capital face a grim situation. The number of cremations at Delhi’s biggest crematorium Nigambodh Ghat has gone up by at least 30 percent.

Delhi on Wednesday reported over 104 Covid-19 related deaths, the highest since November 2020. The second wave of Covid has hit hard the city with more than 10,000 cases in a single day. It recorded more than 17,000 new cases, a record high since the outbreak of the pandemic in the last 24 hours.

According to one of the relatives of the Covid-19 patient who lost his life on Tuesday night, at the Nigambodh Ghat even after five hours, the funeral had not been performed due to lack of space at the cremation facility. We arrived here at 8:30 am. Our turn has not come yet. The situation is very bad. Two-three dead bodies are being brought in each ambulance, said Gautam, 27.

Delhi’s biggest graveyard near ITO has employed a JCB excavator to constantly dig up for more graves but it is also fast running out of space. From one or two bodies a day, it is now 17 bodies daily. In the last five days, the condition has deteriorated. We only have space for 90 more. If situation continues like this, then in the next 10 days, we will run out of space, said Mohammad Shamim, the caretaker of the graveyard.

Mashqoor Rashid, who oversees burials of coronavirus victims, makes a grim projection as he one after another, the bodies get buried at the Qabristan Ahle Islam near ITO. At this rate, we will run short of land in a month. Since last week, on average 10-15 bodies of Covid victims are being buried daily here. Yesterday, 18 burials were performed, he said.

The general secretary of Badi Panchayat Vaishya Beese Agarwal organisation, Suman Gupta, who manages the city’s main crematorium at the Nigambodh Ghat, said, Usually, around 50-60 cremations are performed here daily. The number has gone up to over 80 now.

North Delhi mayor Jai Prakash, in a letter to Chief Minister Arvind Kejriwal, sought help for arranging land for burials. A municipal official, meanwhile, has said that the burial of Covid-19 victims requires especially dug-up graves which are being prepared through backhoe loaders as the number of deaths is rising and the digging manually would take more time and manpower.

However, an official from the Delhi Waqf Board, which runs several graveyards in the city, has been quoted saying that there was no scarcity of land for burials so far. We have enough land for burials, he said.