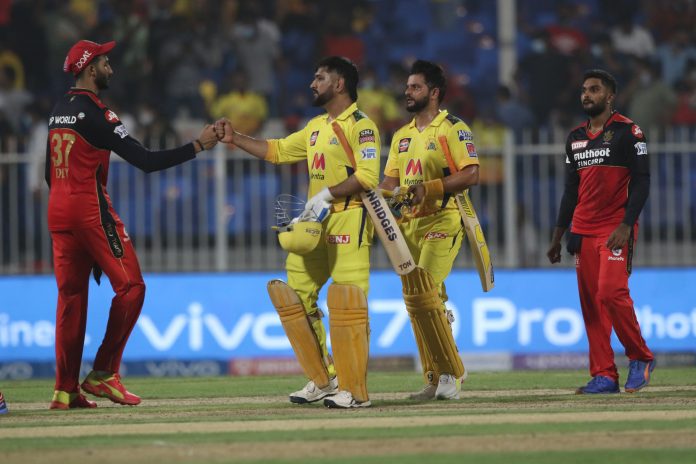 Chennai Super Kings registered their second consecutive win in the UAE leg of IPL 2021, as they beat Royals Challengers Bangalore by 6 wickets on Friday. With this win over RCB, CSK reclaimed their top spot on points table. The experienced DJ Bravo once again proved to be the trump card of Dhoni’s army. Bravo took 3 wickets in match and gave only 2 runs and scalped 2 wickets of Glenn Maxwell and Harshal Patel in 20th over of the match.

After winning the toss Dhoni opted to field first. Batting first RCB had their dream start as their opening pair of Kohli and Devdutt Paddikal added 111 runs for 1st wicket. Kohli and Paddikal both scored half centuries, 53 and 70 runs, respectively. Bravo delivered the breakthrough for CSK as he got Kohli in first ball of 14th over. Once Kohli went to pavilion, RCB started losing their wickets on regular intervals and lost the momentum in the match. In last 4 overs of the match RCB made only 25 runs and lost 5 wickets. Despite of the start RCB had, they posted 156-6 and set the target of 157 for CSK. Bravo and Shardul Thakur took 3 and 2 wickets, respectively.

CSK responded strongly to the chase of 157 and all their batters batted beautifully on this small ground.  Ruturaj Gaikwad the CSK’s hero against MI, was once again team’s highest run scorer with 38 runs. He added 71 runs for first wicket with Faf du-Plessis. None of the RCB’s bowlers were effective, as every one of them got hammered by CSK. The duo of Dhoni-Raina completed the chase in 19th over of the innings.

CSK needs only 2 points to confirm their place in playoff, however RCB is also in the race but given their form and their next match against Mumbai Indians, it will not be easy for Kohli and co. to beat Rohit’s MI.

DJ Bravo of CSK was named ‘man of the match’ for his remarkable performance.

Mukul Rohatgi is the former Attorney General of India and he was the 14th AGI. He served for three years as AGI from 2014 to 2017. Moreover, he also served as Additional Solicitor General of India.
Read more
Load more