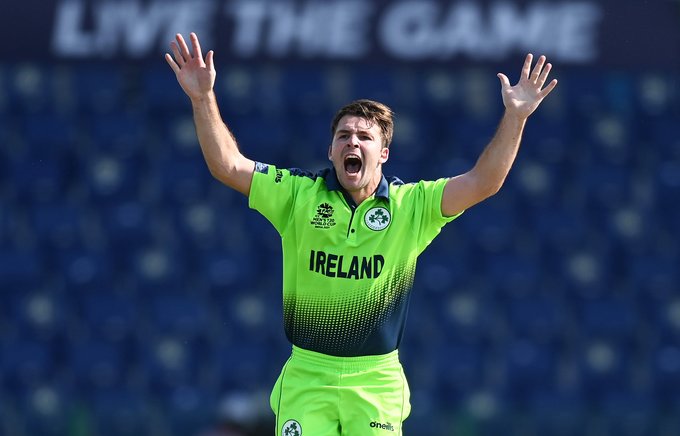 Ireland’s Curtis Campher became the first bowler to take a hat-trick in T20 World Cup 2021. Campher took 4 wickets in 4 balls, he is the third player to do so after Lasith Malinga and Rashid Khan. Campher achieved this feat during the match against the Netherlands in the ongoing T20 World Cup 2021. Curtis is also the first player from Ireland to take a hat-trick in T20I and 20th in the world.

After being hit for 123 runs in his first over, Curtis took the ball again in 10th over of the match and took 4 wickets in 4 consecutive balls. The pacer removed Colin Ackermann (11), Ryan ten Doeschate (0), Scott Edwards (0) and Roelof van der Merwe (0) off successive deliveries.

Interestingly, Rashid achieved this feat in 2019 against Ireland and became the first player to do so, where his figures were 27/5. Not to forget, in the very same year, Sri Lanka’s Lasith Malinga recorded incredible figures of 6/5 in four overs against New Zealand, taking 4 wickets in 4 balls.

Earlier, after winning the toss Netherlands opted to bat first and were looking good at 51/2 in 9 overs, but since Campher destroyed Netherlands’ batting line-up, they ended up at 106-10 in 20 overs.

Ireland and Netherlands are playing the group game of the edition. The top-2 sides of the group will directly qualify for the super-12s, which starts from October 23.