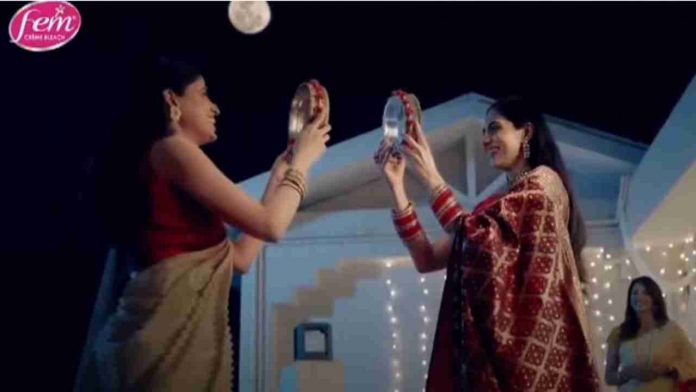 Dabur India, which released Fem advertisement on Karwa Chauth, withdrew the ad on Tuesday. The progressive ad featured a same-sex couple celebrating the auspicious Hindu festival wherein a wife fast for her husband.

The advertisement was ruthlessly trolled on social media and a section of users slammed the brand for hurting Hindu sentiments including Madhya Pradesh Home Minister Narottam Mishra. He directed the state police chief to ask Dabur India to withdraw the ad and take legal actions if the brand fails to do so.

Followed by the order, Dabur India has now dropped off the ad and released a statement. It read that the Fem’s Karwa Chauth campaign has been withdrawn from all social media handles and the brand unconditionally apologises for unintentionally hurting people’s sentiments.

Talking about the advertisement, it promoted a bleaching product with a progressive message. It featured two young women getting ready for their first Karwa Chauth. Later, the ad revealed that they are each other’s partners.

The Fem Creme Bleach advertisement triggered strong reactions on social media. While some found it innovative and forward-thinking, some found it derogatory towards the Hindu religion.

Earlier, the homegrown clothing brand, FabIndia faced similar wrath of social media after they dropped the advertisement showcasing their new Jashn-e-Riwaaz Diwali collection. The brand was severely trolled for using an Urdu word for a Hindu festival.

Tyre brand CEAT also received backlash for their advertisement on Diwali. The ad featuring Bollywood star Aamir Khan sent out a strong message of not bursting crackers on the streets during Diwali. Followed by the release of the ad, Karanataka BJP MP, Anantkumar Hegde, objected to the ad and said that it sends out an important message but roads also get blocked every Friday during Namaz.