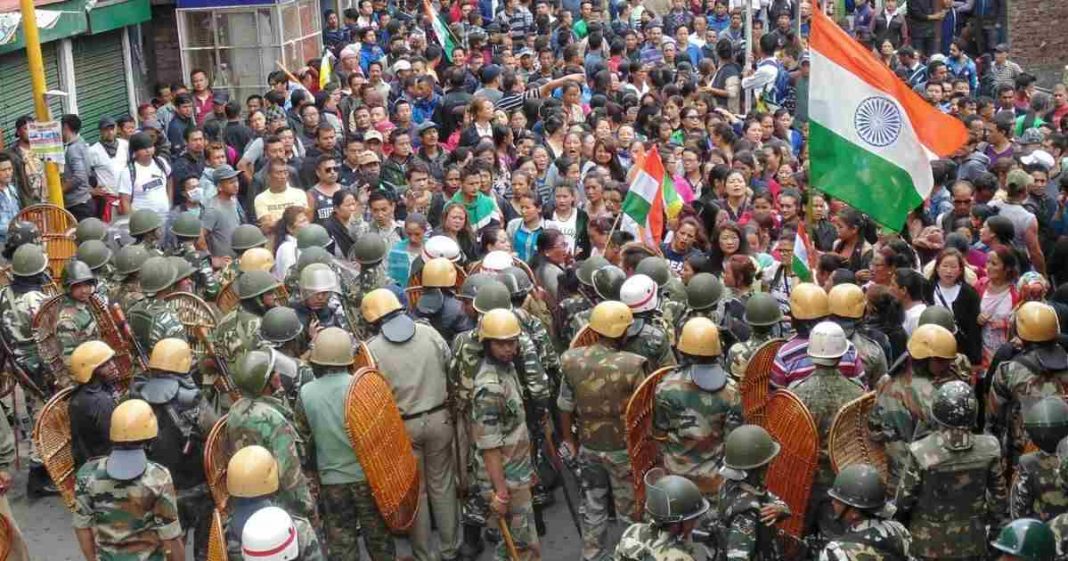 After violence and firing on the streets left three supporters of the Gorkha Janmukti Morcha (GJM) dead, over the demand for a separate statehood on Saturday, the supporters have on Sunday occupied 1.5 Km stretch road in the protest rally, where the bodies of the three supporters are to arrive.

After Saturday’s violence, police who are on high alert conducted route marches with the army and placed barricades in front of government and GTA offices, and other entry-exit polls of the hills.

In a video statement released on Saturday, Bimal Gurung, the GJM chief from his hideout urged people from all the hills and nearby areas to assemble at Chowk Bazaar to pay tributes to the three martyrs.

However, police have declined permission to hold the rally. “No one has been given permission hold a rally in the hills,” a senior police official was quoted by PTI.

Bimal Gurung, at whose calls the people of Darjeeling have erupted over the demand for a separate state of Gorkhaland, has emerged from the shadows of Subhas Ghising, chief of Gorkha Liberation National Front (GLNF) and is touted as the face of the renewed demand for Gorkhaland.

“We want Gorkhaland and nothing else,” said Gurung, mass leader of the Gorkhas. He joined politics as a teenager and rose through the ranks under Subhas Ghising, who in the 1980s had launched a violent agitation for a separate land of Gorkhas.

“In a democracy like India resorting to violence would never help in finding a solution. Every issue can be resolved through mutual dialogue,” Home Minister Rajnath Singh was quoted by ANI as he appealed to the people in Darjeeling.

West Bengal CM Mamata Banerjee has denied the GJM’s claim that three persons died during in a police firing and called this ongoing agitation in the hills as a “deep-rooted conspiracy” backed by the insurgent groups of the northeast and some foreign countries.