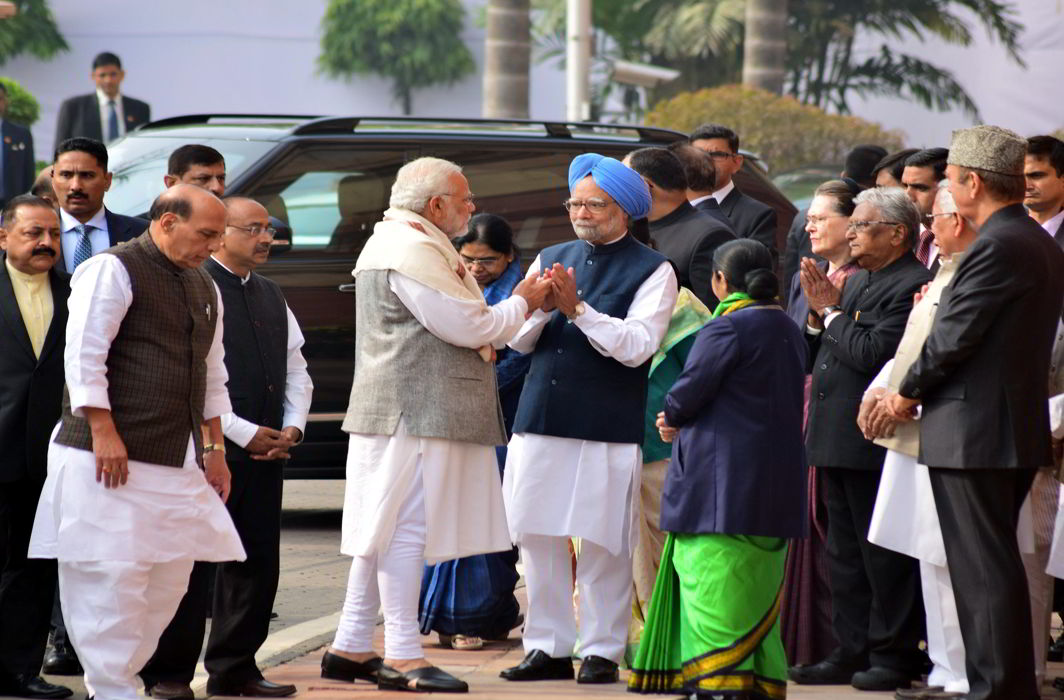 Days after former Prime Minister Dr Manmohan Singh asked his successor Narendra Modi to apologise for alleging that Congress leaders had met Pakistani officials to hatch a conspiracy for ousting the BJP from Gujarat, the two leaders came face to face for the first time at the Parliament premises on Wednesday.

While it is not known whether Modi actually apologised to Dr Singh for dragging the latter along with former Vice President Hamid Ansari and former Army Chief General (retired) Deepak Kapoor into the ‘Pakistan conspiracy’ row, news agency ANI did circulate photographs of the awkward meeting.

The brief meeting took place as Parliamentarians arrived at the Parliament complex to observe the anniversary of the December 2001 Parliament attack and pay tributes to the security personnel who had lost their lives in the terror strike.

The brief meeting, albeit an incidental one, invokes particular interest since it comes close on the heels of the allegations that the Prime Minister had made against Dr Manmohan Singh while campaigning for the BJP in Gujarat. Modi had alleged that a meeting was convened by now-suspended Congress leader Mani Shankar Aiyar at his residence on December 6. Modi alleged that at this “secret meeting” former Pakistan foreign affairs minister Khurshid Mahmud Kasuri and some officials of Pakistan discussed the Gujarat elections with Dr Singh, Hamid Ansari and Aiyar while speculating that the discussions revolved around ousting the BJP from Gujarat.

Modi’s comments had attracted strident criticism from Opposition leaders, including Dr Singh who had accused the Prime Minister of spreading “falsehoods and canards” and for “setting a dangerous precedent by his insatiable desire to tarnish every constitutional office”. The former Prime Minister had hoped that Modi will show the “maturity and gravitas expected of the high office he holds… apologise to the Nation for his ill-thought transgression to restore the dignity of the office he occupies”.

While Modi has maintained a studied silence on Dr Singh’s strong rebuttal of his comments, it is now a matter of speculation whether the Prime Minister did finally, and quietly, apologise to the Congress leader he has often mocked.

The function was also attended by Congress president-elect Rahul Gandhi who, while leading his party’s campaign in Gujarat, took on Prime Minister Narendra Modi on a daily basis, posing pointed questions at him over the BJP’s performance in the state that the saffron party has ruled for the past 22 years. The sharp attacks from the Nehru-Gandhi scion had attracted scathing remarks from Modi. It is not known yet whether like his meeting with Dr Singh, Modi also met Rahul Gandhi on the sidelines of the function.