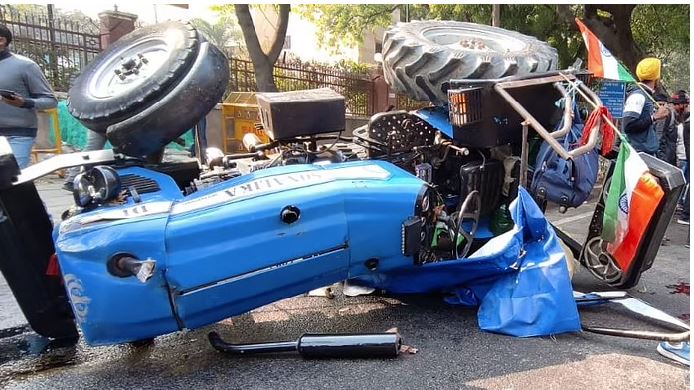 One person died after a tractor overturned at Delhi’s Deen Dayal Upadhyay Marg during the violent protest by farmers on Tuesday against the three farm law by the central government. Fellow protesters claimed that farmer was killed after he lost his balance after being shot at by the Delhi police.

The farmers protest turned violent when protestors broke police barricades at Delhi’s border areas and clashed with the police in several parts of Delhi.

Many police officers as well as protestors have been injured during the Republic Day tractor rally in the National Capital. Later, police resorted to lathi-charge and tear gas shelling to control the situation in the capital.

According to the reports, Delhi police personnel used tear gas to diffuse groups of farmers coming from the Singhu border point as they tried to hold a march on the outer Ring Road before the time allotted to them by the Delhi Police

Due to the ongoing tractor rally in National Capital, all roads leading to Central Delhi from East and North East Delhi have been blocked by the police.

The Delhi’s Connaught Place will remain closed on Tuesday in view of the ongoing farmer tractor march which  turned violent at many areas in the city.

Atul Bhargava, the New Delhi Traders Association president said the Delhi Police has advised the commercial hub to remain closed in view of the agitation and not to open till the further order.

Ther Gurugram Police created concrete barriers and containers on both sides of the Delhi-Jaipur expressway (NH-48) near the NSG campus to stop the agitating farmers from entering the national capital with their trucks.

A number of trucks were stationed on the Delhi-Jaipur expressway between the NSG campus and Manesar Women’s Polytechnic College.