The death toll in northeast Delhi communal violence over the amended citizenship law has reached 23. The Delhi HC held an urgent hearing at midnight after two days of incessant violence and rampage across Northeast Delhi. The HC has ordered Delhi Police to ensure safety and immediate medical aid for all those who have been injured in the violence.

All private and government schools in Northeast Delhi are closed today and CBSE board exams scheduled in centres in the areas postponed.

Meanwhile, Delhi Metro authorities have said all entry and exit gates at all stations have been opened and normal services have resumed.

6:35 pm: The Delhi Police will address the media at 7pm to share information on the law and order situation in North East District. The press interaction will he held at the Delhi Police headquarters.

6:20 pm: People of Delhi do not want violence. All this has not been done by the ‘aam aadmi’. This has been done by some anti-social, political and external elements. Hindus and Muslims in Delhi never want to fight.

5:43 pm: Delhi CM Arvind Kejriwal in Delhi Assembly: I want to assure the family of Delhi Police Head Constable Rattan Lal ji that we will take care of them. We will give a compensation of Rs 1 Crore and a job to a member of his family.

5:35 pm: People have a sense of unity among them, there is no enmity. A few criminals do things like this (spread violence), people are trying to isolate them. Police is here & doing its work. We’re here as per the orders of HM & PM. Inshallah yahan par bilkul aman hoga: Ajit Doval.

5:30 pm: Haryana government issues advisory on law and order situation across the state especially for the districts adjoining Delhi in the wake of the recent violence in national capital during CAA/NRC protest.

5:24 pm: Situation being monitored in areas of northeast with the help of drone, says Ajit Doval.

5:19 pm: Congress leaders and workers participating in ‘peace march’ stopped at Janpath Road. They were heading towards Gandhi Smriti.

5:15 pm: CBSE postpones the following subject exams scheduled for tomorrow in North East Part of Delhi. Exams in rest of Delhi shall be conducted as scheduled. The next date of exam for affected students will be notified shortly. 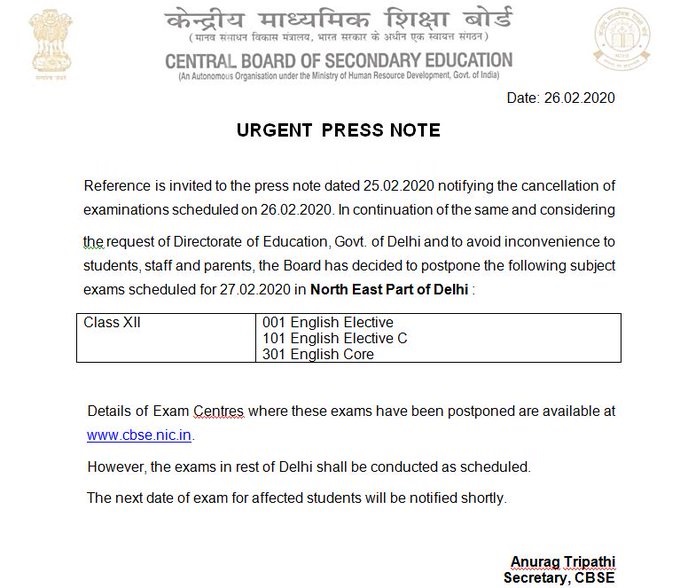 4:52 pm: Situation is totally under control. People are satisfied. I have confidence in law enforcement agencies. Police is doing its work:National Security Advisor (NSA) Ajit Doval.

4:41 pm: Congress leaders and workers have started a ‘peace march’ over the violence in Delhi. They are heading towards Gandhi Smriti.

Congress leaders and workers take out ‘peace march’ over violence in Delhi. They are heading towards Gandhi Smriti. pic.twitter.com/jrXJvGk7wB

4:35 pm: Delhi High Court adjourns the matter for tomorrow and states that the authorities must go strictly by the mandate of the law.

4:06 pm: Hearing the pleas on the violence in Delhi, the Delhi High Court has said it doesn’t want to enter into the question whether Army should be deployed to contain violence in North East Delhi. “We should focus on the issue of registration of FIR right now,” the court said.

3:57 pm: “No way to restore peace and normalcy in Delhi other than calling in Army,” says CPI(M) leader Sitaram Yechury.

3:52: No reason not to lodge FIR against 3 BJP leaders: Delhi govt to HC

3:03 pm: Delhi High Court directs to set up helplines for immediate help for victims, private ambulances to be provided for safe passage of victims.

2:53 pm: Delhi High Court expresses concern over body an IB officer found in north-east Delhi. Court says it is “very unfortunate”. Court also asks the highest functionaries in state and central government to personally meet the victims and their families.

2:14 pm: After Congress’s presser on Delhi violence, Union Minister Prakash Javadekar targetted Sonia Gandhi, saying the government is open to discussion but politics should not be done over the issue.

Union Minister & BJP leader Prakash Javadekar: Congress president Sonia Gandhi’s statement is unfortunate & condemnable. At such times all parties should ensure that peace is maintained, blaming the government instead is dirty politics. Politicising this violence is wrong https://t.co/BngL9ZLeVE pic.twitter.com/z20bsw3eKH

Peace and harmony are central to our ethos. I appeal to my sisters and brothers of Delhi to maintain peace and brotherhood at all times. It is important that there is calm and normalcy is restored at the earliest.

1:51 pm: Priyanka Gandhi Vadra, Congress: I appeal to the people of Delhi to not indulge in violence, exercise caution & maintain peace. We have told our workers in Uttar Pradesh to do all they can to maintain peace if violence spreads there.

1:39 pm: Hitting out at the Delhi government and the Centre, Sonia Gandhi said both the governments have “intentionally not done anything to contain the violence in Delhi” because of which 20 people have lost their life.

1:36 pm: Delhi CM must be visible in affected areas and in constant communication with people: Congress chief Sonia Gandhi.

1:26 pm: Sandeep Surjewala, Congress: Congress was to hold a march and give a memorandum to President today but he communicated that he is unavailable and has given us time tomorrow. Upholding the respect for his high office, we have deferred the march for tomorrow.

1:21 pm: Congress Interim President Sonia Gandhi in Delhi: There is a conspiracy behind the violence, country also saw this during Delhi elections. Many BJP leaders made inciting comments creating an atmosphere of fear and hatred.

1:07 pm: Delhi Commissioner of Police, Amulya Patnaik: Normalcy has returned in North East district to a large extent, senior officers are on rounds, extra forces have been given and lot of confidence building measures are being taken. Things being brought back to normal.

1:01 pm: Delhi violence matter in Delhi HC: Justice Muralidhar says that the situation is very unpleasant. We have all watched videos of some leaders making hate speeches openly. It’s on every news channel.

12:56 pm: Central govt should take steps to normalise the situation in Delhi and prevent violence. The Union Home Ministry should not hesitate to take strong action against the culprits. The police should be effectively deployed to prevent violence: Kerala CM Pinarayi Vijayan.

Whether the violence in East Delhi was instigated (MOS-Home) or spontaneous (MHA), the government has a duty to end the violence.

Whether the violence in East Delhi was instigated (MOS-Home) or spontaneous (MHA), the government has a duty to end the violence.

12:32 pm: Delhi Police releases a list of officials who can be contacted in case of emergency in wake of the riots in North East district.

Delhi Police: Any person who wants the details of any victim, he or she may contact the following officers. #DelhiViolence pic.twitter.com/casFST2mnx

12:17 pm: Police doesn’t have to wait for orders if someone makes inflammatory statements but act in accordance with law: SC on Delhi violence

12:09 pm: Justice KM Joseph in Supreme Court expresses his displeasure over the way the police have acted. “The police needs to act immediately to handle the situation,” says Justice Joseph.

12:05 pm: No incident of violence reported today in Gokulpuri. Security personnel have been deployed in the area.

12:01 pm: SC disposes applications relating to Delhi violence, says it is for HC to take note of matter.

11:29 am: Congress leaders will march to Rashtrapati Bhavan to seek normalcy and peace in violence-hit Delhi, party sources have said.

11:20 am: “Out of all the people that were brought to the hospital 189 are injured and 20 are dead,” says Sunil Kumar Gautam Medical Superintendent, Guru Teg Bahadur (GTB) Hospital.

11:19 am: “Distressing scenes in Delhi!! #DelhiBurning as a result of ulterior motives of divisive forces within our Country. Police have completely failed in their responsibility. People have to remain calm and promote peace in the area for their own benefit,” says senior Congress leader Siddaramaiah.

11:04 am: Chief Minister Arvind Kejriwal has said he will write to Home Minister Amit Shah over the “alarming situation” in the national capital. The CM has also called for the deployment of the Army in affected areas.

I have been in touch wid large no of people whole nite. Situation alarming. Police, despite all its efforts, unable to control situation and instil confidence

Am writing to Hon’ble HM to this effect

10:52 am: Delhi HC directs police to respond by 12:30 pm on plea for action against those involved in inciting violence in northeast Delhi over CAA

10:47 am: Delhi High Court issues notice to Delhi Police and asks senior officials to remain present in the court in connection with a plea on violence in Delhi’s North East district.

8:07 am: Delhi High Court in a midnight hearing (on the intervening night of 25&26 February) directed Delhi Police to ensure safe passage for the injured victims by deploying all resources, as well as to make sure they receive immediate emergency treatment.