Deepika Padukone’s visit to JNU invites both praise and criticism 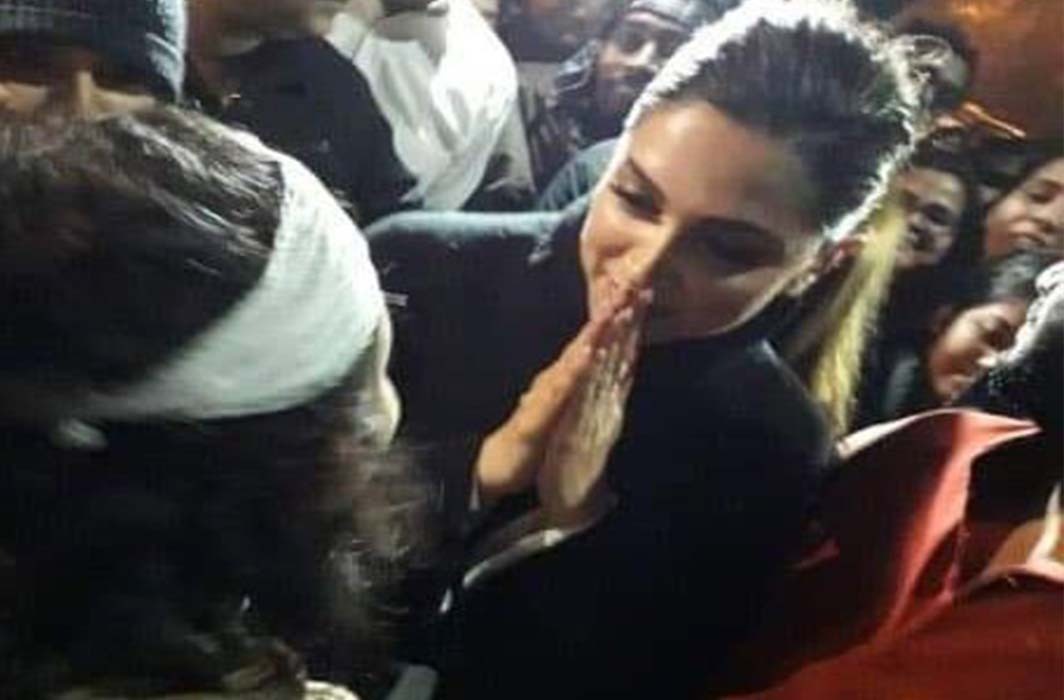 While BJP supporters and a few leaders also called for a boycott of her movies, Union minister Prakash Javadekar clarified that any common man has the right to express their opinion.”There can be no objection to it,” he added.

On Sunday evening, over 30 students and teachers, including Aishe Ghosh were attacked by masked miscreants who entered the university campus, armed with iron rods, sledgehammers and stones. The injured were later admitted to All India Institute of Medical Sciences.

According to reports, Padukone stayed on campus for about 10 minutes. The actor, however, didn’t speak to the media.

In an interview with India Today earlier, Padukone talked about the recent attacks, “I feel angry that this is happening but at the same time the fact that action has not been taken, this is what one needs to think about it,”.

Deepika Padukone was in Delhi to promote her upcoming film Chhapaak. The film, directed by Meghna Gulzar, is based on the life of acid attack survivor Laxmi Agarwal.

Minutes after her appearance at the protest, BJP’s Tajinder Pal Singh Bagga called for a boycott of her films. He urged his followers to boycott movies of Padukone for her support to TukdeTukdeGang and Afzal Gang.

RT if you will Boycott Movies of @deepikapadukone for her Support to #TukdeTukdeGang and Afzal Gang pic.twitter.com/LN5rpwjDmT

:@deepikapadukone I usually avoid tweeting to Bollywood but if this is your bid to sell a movie on a woman’s fight by sharing stage with somebody penalised for sexual misconduct (he flashed himself to a woman student at JNU in 2015) then it defeats the very purpose!

Simple arithmetic of Deepika Padukone’s JNU visit. A vast majority of people support her. The easy way to neutralize the few who plan to boycott her film is for others to see it twice. It’s easy to see that, by this logic, if 10% boycott her film the viewership will go up by 80%.

So the original #TukdeTukdeGang will stand in support & solidarity for the photocopy #TukdeTukdeGang
Can anyone enumerate the names of those from Bollywood/Khan-market-gang who are planning to fly to Lahore to extend their well meaning support! https://t.co/ut4MD89jZ2

BJP leader Ram Kadam also condemned  the actor’s visit and deemed it as “unfortunate”. “It is unfortunate that Deepika Padukone visited JNU. We condemn this,” Kadam was quoted saying by ANI.

BJP leader Shahnawaz Hussain attacked the 34-year old actor, saying that her visit to the university reflected her “one-sided thinking”.

Madhya Pradesh BJP’s vice president, Rameshwar Sharma also took a jibe at the actor. Sharma said, “Deepika Padukone is standing with those who are anti-nationals.”

However, the actor’s presence at the protest also received admiration from activists, actors and journalists.

Let’s not forget she is also the producer of the films .. stakes are even higher . Mad respect for @deepikapadukone https://t.co/y5CPzSEedU

Thank you @deepikapadukone … thank you for being a true INDIAN .. pic.twitter.com/eHiYNCXA1R

It takes guts to do this two days before the release of a high stake, important film. https://t.co/ee76wyexuw

Kudos @deepikapadukone for showing spine and compassion and showing up in solidarity with JNU students who are victims of violence and mob attacks. pic.twitter.com/HRxDK0qHQ3

This isn’t the first time that Padukone has faced opposition from right-wing organizations. For her movie 2018 period drama Padmavat, Padukone received death threats, where a political leader called for the beheading of the actor.

Chief ministers of BJP-ruled states such as Rajasthan, Madhya Pradesh, Uttar Pradesh and Gujarat had also called for a ban on the period drama.

JNV Result 2021: Meanwhile, the provisional select list for class 11 is out, and this list has been released for different regions and students can check their names in the list according to their region.
Read more
Load more