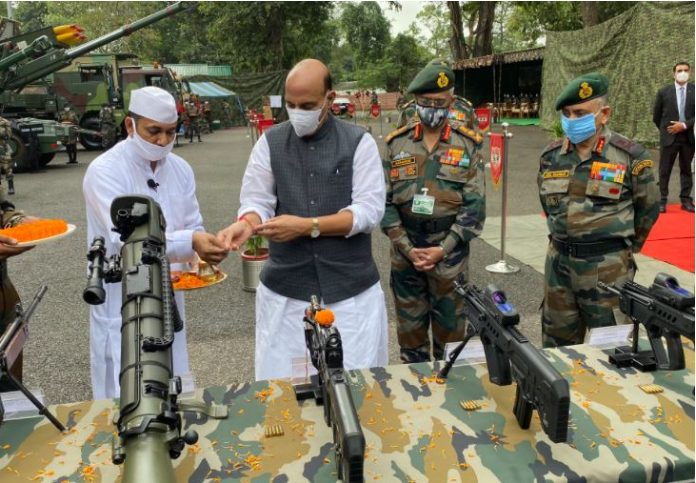 Amidst India-China border row, Defence Minister Rajnath Singh performed ‘Shastra Puja’, a customary worship of weapons at Sikkim’s Sherthang, less than 2km from the Line of Actual Control. India wants peace along its border with China, said Singh after performing the Shastra Puja on the occasion of Dussehra on Sunday. Army Chief General Manoj Mukund Naravane was also present at the occasion.

The customary worship near India’s de-facto border comes amid the standoff with China in eastern Ladakh. Addressing the media after the ‘Shastra Puja’, Singh said that India wants to put an end to the Indo-China border tensions and preserve peace. The Indian Army will not let anyone take even an inch of the country’s land, Singh told the media.

Singh is on a two-day visit to West Bengal and Sikkim to review the preparedness of the forces. He will also meet the soldiers close to Nathula Pass and address them. He will also inaugurate an infrastructure project built by Border Roads Organisation(BRO), during his visit, sources said.

On Saturday, he visited the Headquarters of 33 corps at Sukna in Darjeeling and reviewed the situation in the Eastern sector.

Singh has been performing Shastra Puja on Dussehra for the last several years.Last year, he had performed the worship in the French port city of Bordeaux during Dussehra as he was on a bilateral visit to the country then.

Early May this year, a tense confrontation between Indian and Chinese soldiers also took place in north Sikkim. However, India has deployed close to 60,000 soldiers to counter the Chinese Army that moved troops to transgress into Indian areas in Pangong Lake and other adjoining locations.