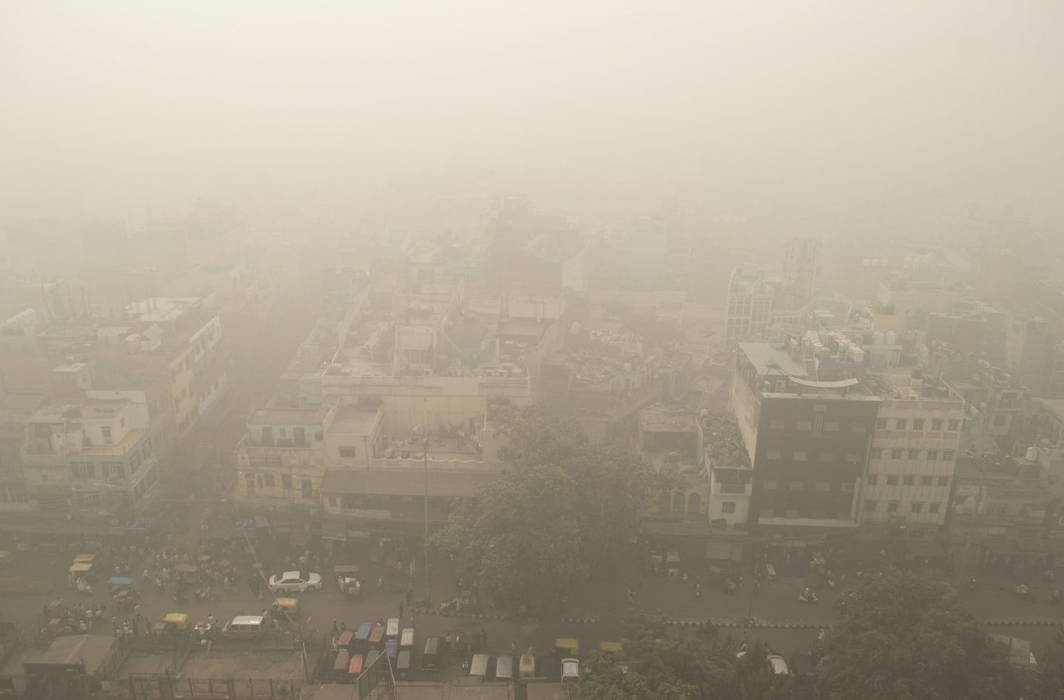 This is way more than 20 times the safe limit prescribed by the WHO.

Sunday had brought a short-lived relief to Delhiites when the pollution level came down to ‘poor’ category after oscillating between ‘very poor’ and ‘severe’ for days. The overall AQI was recorded at 231 on Sunday which falls in the ‘poor’ category.

The System of Air Quality Forecasting and Research (SAFAR) on Saturday predicted deterioration of air quality in the city from Monday. Warning that the high level of moisture in Delhi’s atmosphere and a fall in temperature and upper winds from stubble burning sites will “adversely impact air quality,” the report said “AQI will touch the upper level of very poor from November 5 afternoon onwards” as per the SAFAR-forecasting model.

Meanwhile, schools in Delhi have moved the morning assembly of students indoors and made it mandatory for them to wear masks during outdoor activities. Few schools in the NCR region have also started distributing gooseberries to students, which, according to health experts, minimize effects of air pollution on lungs.

The Supreme Court-appointed Environment Pollution Control Authority (EPCA) has urged Delhiites to use public transport for the first 10 days of November to keep a check on pollution. Noting that private vehicles contribute to 40 per cent pollution in Delhi-NCR, the EPCA urged people to reduce the use of private vehicles during this period and use public transport or other means.

The contribution of stubble-burning to pollution in the national capital is expected to be 24 per cent today, said an NDTV report quoting a weather official.

An aggressive 10-day-long ‘Clean Air Campaign’ from November 1-10 has also been launched to monitor and report polluting activities as well as to ensure quick action.

A penalty of over Rs 83 lakh was imposed on violators in a single day on Sunday by the teams deployed to monitor implementation of measures to combat pollution in the Delhi NCR under the Clean Air Campaign, the CPCB said.

The highest number of complaints related to illegal construction and demolition activities.

An aggressive ten-day-long ‘Clean Air Campaign’ from November 1 to 10 has been launched by Union Environment Minister Harsh Vardhan to monitor and report polluting activities as well as to ensure quick action.

These teams are visiting different parts of Delhi and adjacent towns of Faridabad, Gurugram, Ghaziabad and Noida.

Based on 368 complaints, a total fine of Rs 83,55,000 was imposed on Sunday itself by 52 teams in the national capital, said the Central Pollution Control Board.

A total of 119 complaints of construction and demolition activities were received. Other complaints included that of vehicular emission, traffic congestion, industrial emission, open or garbage burning, leaf burning, road dust, unpaved road, fire in landfill sites, air pollution from generators among others, it said.

The Delhi Pollution Control Committee (DPCC) has also directed the Transport Department and the Traffic Police to intensify checking of polluting vehicles and control travel congestion in the region during November 1-10.