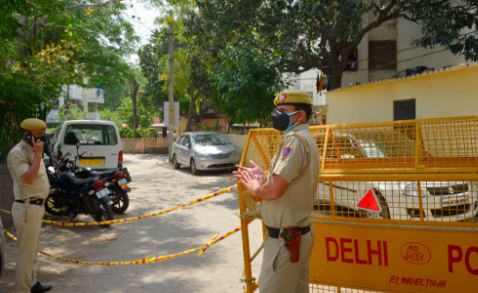 An 18-year-old student was beaten to death earlier this week allegedly over his friendship with a woman, police reported on Friday. The incident took place in west Delhi’s Adarsh Nagar where the boy lived with his family. He was attacked on Wednesday by the family of the woman he was in relationship with. Five people have been arrested by the police in the case which includes 3 minors.

The deceased Rahul Rajput was a second year student in Delhi University’s School of Open Learning and he would also give tuition to school students to help his family which largely depended on his father’s earnings as a taxi driver. He was seen on a security footage with the girl, moments before he was attacked on Wednesday.

A senior police official said in a statement that Rahul was friends with a woman from his locality but her family was against their friendship. Woman’s family and friends allegedly called him at Nanda road on some pretext on Wednesday evening. When Rajput reached the spot, he was physically assaulted by a group of four-five people.

Rajput’s uncle Dharampal who is also a taxi driver said that about two months ago, the family got to know about the 18-year-old’s relationship with the woman and was concerned about his safety as the woman’s parents, especially her brothers were against their relationship and had threatened the victim before, he added.

He told police that on Wednesday, around 7 pm, he got a call from his friend who informed him that four-five people were beating Rahul. When he reached the place, he found that his nephew was being beaten up brutally by the woman’s brothers and their associates. They slapped, punched and kicked him, he mentioned in his complaint.

The Delhi University student was taken to hospital where he succumbed to his injuries during the course of treatment.

An autopsy was performed on his body where the doctor opined that rupturing of the spleen led to his death and there was no visible injury, said Vijayanta Arya, Deputy Commissioner of Police (Northwest).

Police registered a case under section 302 (murder) and 34 (Acts done by several persons in furtherance of common intention) of the Indian Penal Code.Police arrested Manwar Husaain, Md Raj, and three minors based on a statement given by the woman, who is now prime witness in the case.

Meanwhile DCP of North West Delhi has appealed to not give the incident a communal color as it is a dispute between two families. The father of the victim has requested the same.

Reacting to the 18-year-old’s death, Deputy Chief Minister Manish Sisodia today announced Rs 10 lakh compensation for the victim’s family and ensured that the family will be brought to justice.

Delhi: Will there be no weekend curfew? Here’s what CM Arvind Kejriwal said

Arvind Kejriwal, the Delhi Chief Minister, has accepted suggestions to remove the weekend curfew in Delhi. Also, he told to eliminate the odd-even rule in marketplaces, shops and malls, and enable offices that are private to summon 50 percent of their employees.
Read more
Delhi news

According to the System of Air Quality and Weather Forecasting And Research (SAFAR), the air quality index in Delhi was recorded at 312 with a minimum temperature of 8.5 degrees celsius.
Read more
Delhi news

When compared to the number of samples tested the day before, the number of daily Covid-19 tests in Delhi has reduced by 31.7 percent.
Read more