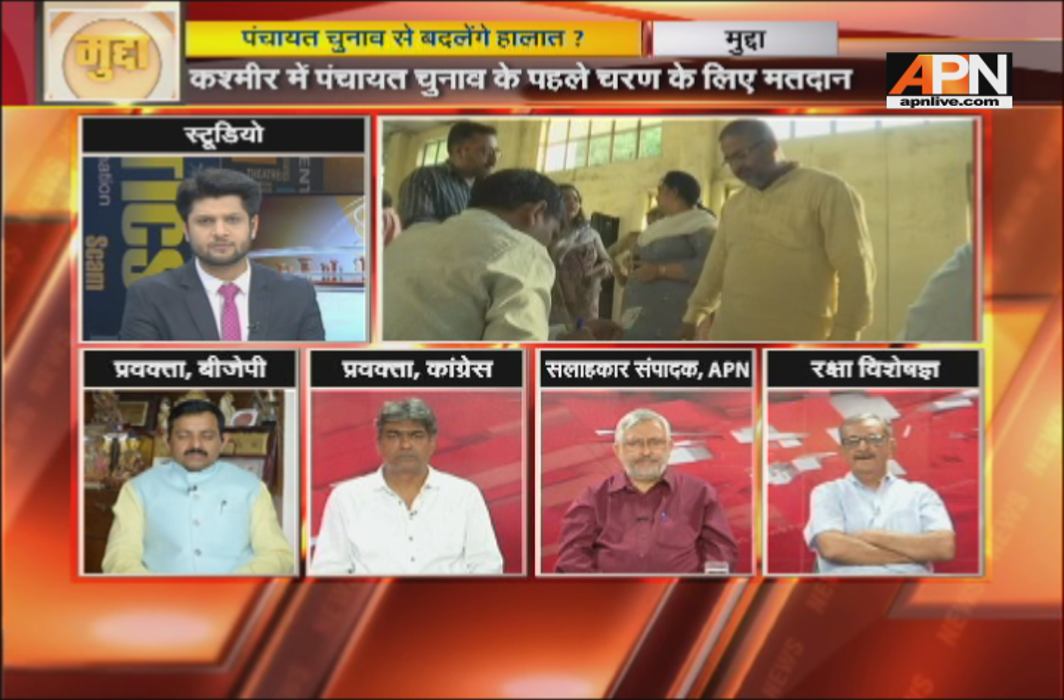 Jammu and Kashmir is voting for the first phase of the civic polls that has been boycotted by the two key parties in the Valley, National Conference and Mehbooba Mufti’s People’s Democratic Party. Elections are being held in 422 of the state’s 1,100 municipal wards under heavy security. The list includes 149 seats in the Valley and 26 in the Ladakh, Jammu and Pirpanjal region. APN’s popular debate Muddadiscussed the issue. Anchorperson Anant spoke to panelists including BJP’s Anand Sahu, Congress’s Hilal Naqvi, Kashmir affairs expert Ashok Manavti , defence expert Fashi Ahmed, and APN consultant Govind Pant Raju.

Ahmed said: “The electoral step is significant for democracy. Let’s see the final turnout of voters. The two major parties in the Valley are boycotting, and this will certainly impede the electoral process. Civic polls address basic needs of common people. Common man is facing drinking water problems, road infrastructure is poor and so on. One controversial issue is that the BJP has fielded Mehmood Farooq, former JKLF militant. Probably the BJP wants to bring such people into the mainstream. But all this needs to be assessed. He (Farooq) has been trained in Pakistan, and has been a polling agent for Salahuddin, has been influenced by Azhar Mahmud.”

Naqvi said: ”There is no second opinion that the earliest the democracy is back on rails is a good sign. Whether this is the welcome step that will revitalize the state, needs to be seen, BJP did not sit down for across the table talks with the boycotting parties. It is too early to make any statement.”

Sahu said:”It is sad to know that people think that the BJP is not taking the effort. From panchayat to all levels, the BJP is ensuring that democracy is back in the valley, and development works go on as they should.”

Raju said: “Holding elections is an attempt to ensure that people’s voice is heard. PDP and NC refused to take part in polls due to the row on Article 35 A.”

Ahmed said: “NC and PDP will lose their relevance among the people if they refuse to take part in polls. Art 35A issue is separate from civic polls. Common man is really suffering in the interior areas of Kupwara, Baramulla, Rajouri and Poonch etc. How does the ISI or ISISI operate? Muslims are against insurgency but ISIS writ runs in the Valley. Orchards are virtually finished in Kashmir, carpet industry and weaving industries have been feeling the pinch.”

Naqvi said: “The last BJP-PDP government was unable to handle the issues of the people. Those reformed militants who want to come back into the mainstream should be inducted in a formal way, and not handpicked at random.”

Sahu said: “Most former militants who have been inducted are now reformed and have given up their old  habits, they should be allowed to turn over a new leaf.”

Naqvi said: “Wherever the government is weak, problems will multiply.”

Sahu said: “If our government’s intentions were not good, people would not have come out to vote.”

Manavti said: “People are really enthusiastic and want their civic issue to be sorted out fast. But people also want to see work getting done, and an end to militancy.”

Ahmed said: “Whichever party is in power, politicians just want to pat their own back.”