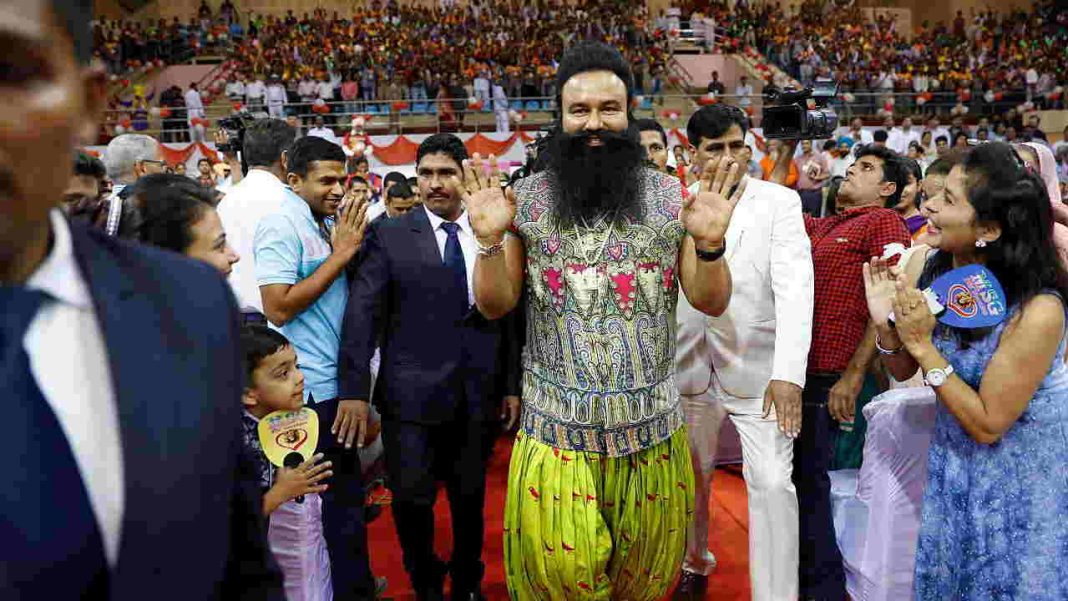 Three days after his conviction in twin rape cases dating back to 2002 led his followers to unleash havoc on the streets of Haryana, Punjab, Rajasthan and Delhi, Dera Sachha Sauda chief Gurmeet Ram Rahim Singh was sentenced to 20 years in jail by special CBI court judge Jagdeep Singh.

Though for a better part of Monday, after a special CBI court set up in the Sunaria jail premises – where the Dera chief has been lodged since Friday – pronounced the quantum of punishment against him, it was believed that Gurmeet Ram Rahim will serve 10 years, it later transpired that CBI judge Singh had awarded him a total of 20 years in jail – 10 each for the two rape cases in which he was convicted.

“The judge announced 10 years of imprisonment and Rs 15 lakh fine each in two cases. Rs 14 lakh each to be paid to both victims,” SK Narwana, Gurmeet Ram Rahim Singh’s lawyer, told news agency ANI. The lawyer explained that the “total sentence is 20(10-10) years, both sentences not consecutive but sentence of 376 and 506 would run concurrently”. Haryana chief minister Manohar Lal Khattar and CBI spokesperson Abhishek Dayal also confirmed that the Dera chief will serve a total of 20 years in jail.

It was earlier believed that the 10-year jail term awarded to the Guru in Bling, as the Dera chief is often called due to his love for gaudy costumes, was to be served concurrently for the two cases, but the special CBI judge seems to have ruled that he serve 10 years each for raping the 2 women.

The sentencing took place at a special sitting of the CBI court within the Sunaria jail premises in Haryana’s Rohtak district where the rapist Godman has been lodged since his conviction.

Amid demands by the public at large and also by the counsel of the CBI which investigated the rape case for sentencing the rapist Godman to serve a life sentence, the CBI court was bound by legal compulsions to award 10 years of rigorous imprisonment per case to the accused. The case against Gurmeet Ram Rahim Singh had been registered in 2002 and legal provisions of the law against rape that applied during this period allow a maximum jail term of 10 years on conviction, the minimum being seven.

The special CBI court had to decline the CBI’s plea of a life term for the Dera chief as such a sentence for a rape convict was provided under the law only after 2013 in the aftermath of the public outrage over the December 2012 Nirbhaya (Delhi) gang rape case. The Criminal Law (Amendment) Act, 2013, which allowed amendments to relevant sections of the Indian Penal Code, Indian Evidence Act, and Code of Criminal Procedure, 1973 on laws related to sexual offences had changed the limit on quantum of sentence that can be awarded to rape convicts from the earlier 7 to 10 years to a minimum of 10 years and maximum imprisonment for life.

However, with clarity now emerging on the actual stint that the rapist Godman is expected to serve in jail – unless the conviction is set aside by a higher court or the quantum of punishment reduced – those demanding life imprisonment for Gurmeet Ram Rahim may finally feel that a better sort of justice has been meted out.

CBI judge Jagmeet Singh had been flown in to Rohtak from Chandigarh in a helicopter due to the obvious risk to his life given the violent protests by Dera followers that claimed over 35 lives in Panchkula and Sirsa districts of Haryana in Friday’s mob mayhem. While all roads leading to the Sunaria jail were guarded heavily by the police and paramilitary forces, Rohtak town itself had been turned into a fortress to prevent a repeat of Friday’s violence which had forced the Punjab and Haryana high court to give a tight wrap on the knuckles to the state’s Manohar Lal Khattar government and even reprimand the Prime Minister Narendra Modi-led central government for evident failures in checking Dera followers from going on a rampage. The Army has been kept on standby while all routes to the jail were sealed.

As proceedings to announce the quantum of sentence against the Dera chief began at the special courtroom set up inside the Sunaria jail, Ram Rahim’s lawyers pleaded for a lenient sentence citing the “philanthropy work done by the Dera chief” and claiming that he “suffered various medical complications”. The 50-year-old Godman, who has been known for his ostentatious lifestyle and gaudy costumes but will now be forced to wear the uniform of a prison inmate as Prisoner Number 1997 of the Sunaria jail, was also present for the proceedings.

As CBI judge Singh pronounced the quantum of sentence, sources say, the Dera chief broke down and sat on the floor of the make-shift courtroom, refusing to leave the premises. Shortly after, he complained of chest pain while still sobbing. Prison and police authorities were forced to drag the Dera chief out of the court premises and he was then taken for medical examination. 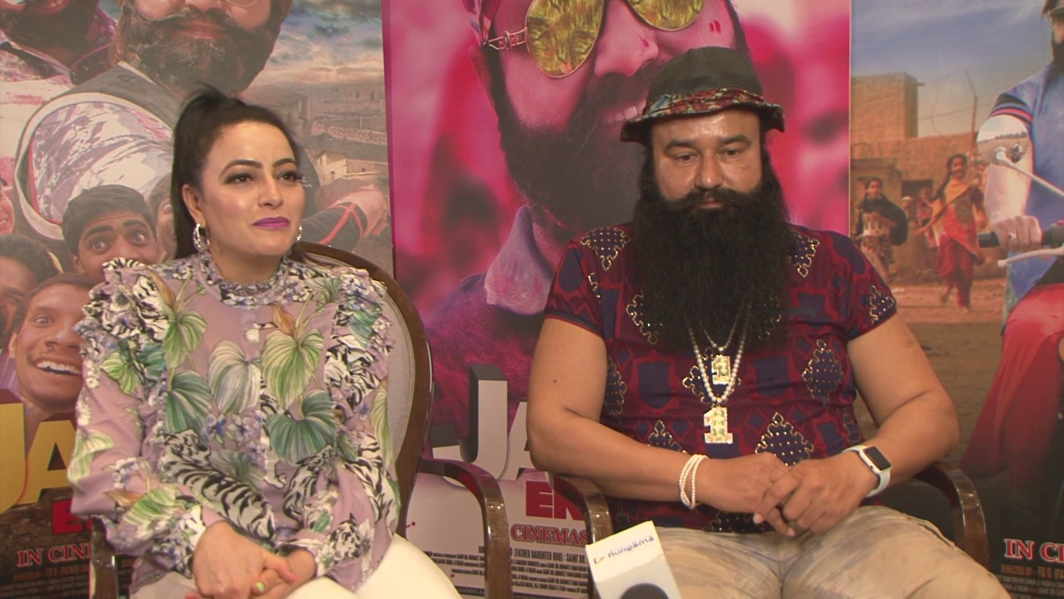 It is learnt that the court has also reprimanded the Sunaria jail authorities and police for giving special treatment to the Dera chief and said this must stop immediately after he is transferred to his jail cell. The court has made it clear that the Dera chief must be made to serve his sentence like an ordinary prisoner. Sources said that CBI judge Singh also ticked off the prison and police officials for allowing an almost the Dera chief’s aide Honeypreet ‘unrestricted access’ to him. Honeypreet was with Gurmeet Ram Rahim in the chopper that was used to ferry him from Panchkula to Rohtak after he was convicted last week and she had accompanied him to the Sunaria jail too. Although she didn’t stay at the Sunaria prison with the Dera chief through the weekend, sources said she visited him for long hours and was present in the prison on Monday too when the Dera chief was taken for sentencing .

Rabid followers of the rapist Godman have asserted that they will appeal in the higher courts against his conviction in the rape case and claimed that the court and probe agency had been “unfair” to him by giving him a 10-year jail term.

Sentence is just the beginning of Dera chief’s troubles:

His conviction in the 15-year-old rape case isn’t the end of troubles for the Dera chief. Gurmeet Ram Rahim Singh is also accused in at least two murder cases – that of journalist Ramchandra Chatrapati, who ran a local newspaper in Sirsa called ‘Poora Sach’. Chatrapati was killed in October 2002 after he had published a series of reports on rape of a woman follower by the Dera chief. The second murder case pertains to that of one Ranjit Singh and dates back to 2002.

The slain journalist’s son, Anshul, who has carried on his father’s fight against the Dera chief and also the legal battle for getting justice for Ramchandra Chhatrapati’s murder, welcomes the court’s decision, on Monday, while hoping that other cases against Gurmeet Ram Rahim will also reach their logical conclusion soon.

The trial in both these cases is in an advanced stage at the CBI has maintained that both these cases are built on strong evidence against the dubious Godman and would earn him convictions.

Then there is a case of disappearance of a Dera manager, Fakir Chand. Another case against the Dera chief is of forcing some ‘sewadars’ in his Dera at Sirsa to undergo castration. Now that Gurmeet Ram Rahim is in jail, there is a possibility that more eyewitnesses may come forward to testify against him in these ongoing cases.

A 15-year-old case that finally reached its conclusion:

The special CBI court of judge Jagdeep Singh in Panchkula last Friday held Ram Rahim guilty of rape in a case that was registered on the basis of an anonymous written complaint in April 2002 alleging that he had sexually exploited two female followers. The case was registered by the CBI in December 2002 on the directions of the Punjab and Haryana High Court.

The CBI had filed the chargesheet against the Dera chief in an Ambala court in July 2007, five years after the rape case was registered. The chargesheet mentions sexual exploitation of two ‘Sadhvis’ (women followers) between 1999 and 2001.

The special CBI court framed charges against Ram Rahim under sections 376 (rape) and 506 (criminal intimidation) of the IPC in September 2008. Over the next two years, the two complainants recorded their statements before the court.

The special CBI court shifted from Ambala to Panchkula and the case against Ram Rahim Singh was also transferred to this court.

In July 2017, the court ordered daily hearings in the case following which arguments of prosecution and defence concluded on August 17, 2017 with the Dera chief being held guilty of rape on August 25.

Victim’s lawyer to approach HC for enhancement of punishment

“We will file two appeals shortly. One for enhancement of the punishment and another for further investigation into the case,” Bains told AFP by phone.

“We believe there are at least 48 more victims who were sexually abused and who may have been killed or are too scared to come out and testify against Ram Rahim,” Bains said.