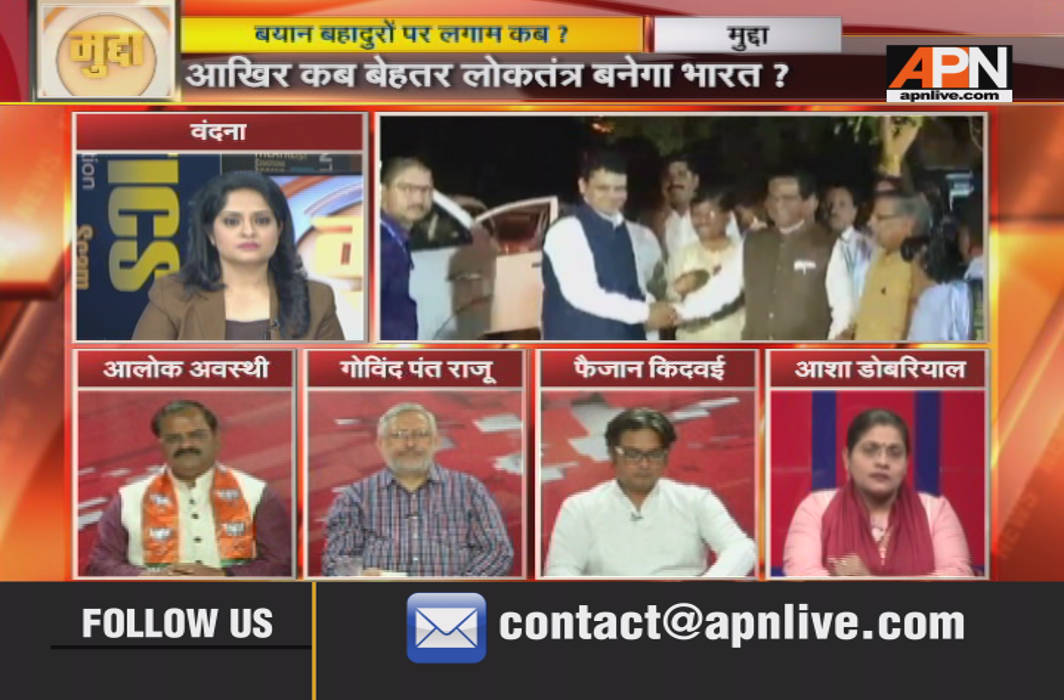 Panelists say that leaders need to be mindful of their remarks

It’s raining allegations and counter-allegations. Among the latest such remarks, Maharashtra chief minister Devendra Fadnavis claimed that those who ask for proof of the Indian Air Force’s air strike across the border should be “strapped to rockets” so that they can see it for themselves. Fadnavis’ comments come a day after his BJP colleague and minister in his cabinet, Pankaja Munde, made similar remarks. APN’s popular debate Mudda discussed the issue.Anchorperson Vandna posed the questions to panellists, including the SP’s Faizan Kidwai, BJP’s Alok Awasthi, Congress’s Asha Dobariyal, and APN consultant Govind Pant Raju.

Awasthi was on the defensive on the rocket remark. He said: “We are simply reacting to what the Congress has been harping at for so long. Please look into the past remarks, and you will understand the reason for these remarks. Since there are no muddas with the opposition, they are indulging in petty politics.”

Awasthi said: “We bought bullet-proof jackets, and today our soldiers feel secure. Our government has shown how work gets done. The opposition needs to see the looking glass to know what they are up to.”

Dobariyal said: “All leaders need to watch out for their remarks. We are with the government to finish terrorism. Don’t just corner us on asking for proof. People need to get the answers.”

Raju said: “This kind of terrorism through talk needs to be abolished. An educated CM like Fadnavis should not be making such statements. What is this statement of tying with rockets? Are these remarks not militant? Azam Khan’s statements are being probed. But all are making loose remarks.”

Kidwai said: “We are mindful of respect towards women.  Five lakh sixty thousands cases were registered in our time through the women’s helpline. Yogi Adityanath has scrapped the move.”

Awasthi said: “These people talk in different languages, depending on the context, and can’t be trusted.”

Kidwai said: “It is sad that BJP leaders are talking in an aggressive language. Such people do not respect democracy. This shows their desperation.”

Awasthi said: “Leaders of opposition parties have never really cared about the quality of their remarks. They have often got the rap from the apex court as well. No senior leader has criticised Azam Khan’s remarks.”

Dobariyal said: “How can BJP claim credit for all the good work and not see its faults. Rapes are on the rise in UP. Derogatory remarks against rivals and women must be stopped.”

Raju said: “The stakes are high in the ongoing LS elections. Leaders are making derogatory remarks or indulging in big talk which will fall flat in reality. The sad part is no one is bothered about the people, they only care for the kursi.”

Awasthi said: “The opposition parties have neither a neta nor a policy in place. What will they deliver? They have no answers.”

“Will the economy recover by opening restaurants and temples?