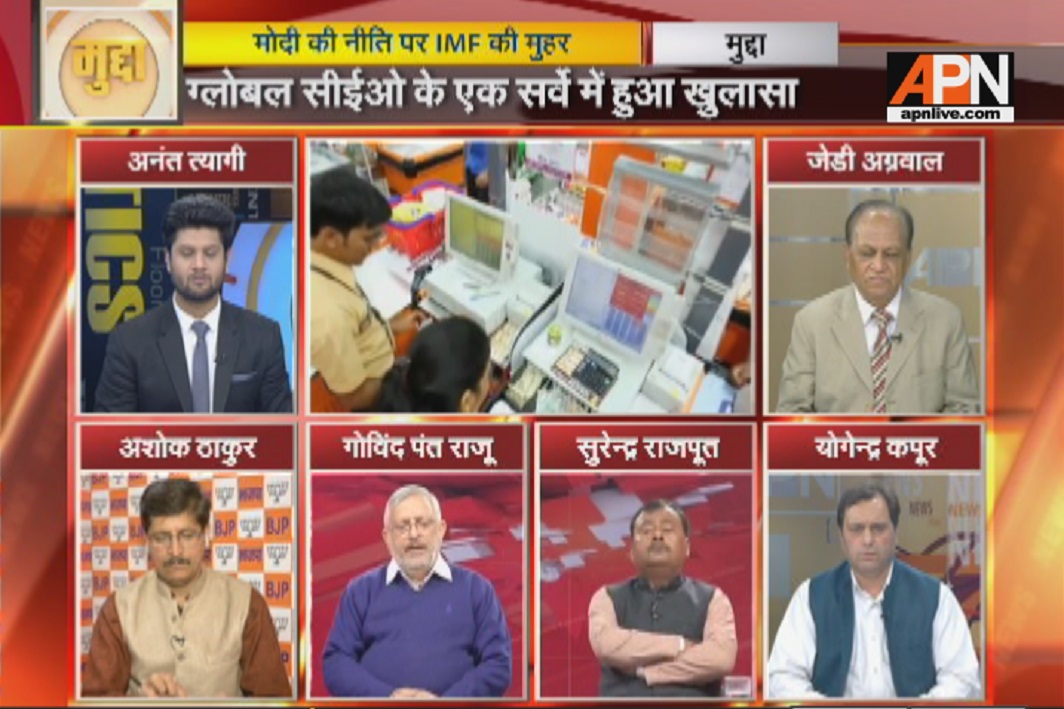 Mudda panellists feel that though IMF and PwC have lauded India’s growth under Modi, the ground reality is still not bright

The International Monetary Fund (IMF) has given a ringing endorsement of the Modi government’s economic policies. In its global growth prospects survey, released on the eve of Modi’s address at Davos, the IMF said that India could grow at 7.4 percent in 2019, leaving China behind. In another good news for the Modi government, a survey conducted by global consultancy PwC, ranked India at the fifth spot for most favourable investment market.

Aggarwal said that India is being rated as the fastest growing economy, which is a big achievement. “Demonetisation and GST are being seen as good fiscal reforms measures. The manufacturing sector has got a boost, and that’s why the foreign agencies have applauded India.”

Kapoor said that there have been financial sector reforms, tax reforms and labour reforms, but one should also see that 1 percent of India is holding 73 percent of wealth in the country. “Growing inequalities are still a major cause for concern,” he said.

Rajput said there are too many inequalities. Ease of doing business is being seen differently by different agencies. “For foreigners, we are just a market, we should see what our farmers and poor are suffering, and their economic problems. Development is there, but it’s not percolating down. Ninety percent Indians need to be catered to,” he said.

Raju said that the economic gap is widening, education and health are increasingly in private hands, and the poor cannot afford basic amenities.

Thakur said he can’t understand those who say that the agencies’ rating is being manipulated. “The biggest hurdle to development has been corruption and black money, and Modi has tackled them both,” he said.

Kapoor said that corporatisation of the rural sector is needed. “The agriculture sector has suffered because of poor implementation of rural schemes,” he said.

Raju said that Modi has been attracting world attention to India, so that India is seen as an investment spot, and this is a good step.

Thakur said that the government’s seriousness and intent should be seen in the market. Each segment of the economy is being vitalized.

Rajput said nobody questions the intent of the PM. “But we need to see the progress on the ground. The reality is that the GDP is down, farmers are committing suicide, unemployed are suffering, developed and the rich are moving ahead.”

Thakur said that the Modi government has been very feisty and that should be appreciated. “In the Congress’s time, farmers’ woes were much more,” he said.

Raju said, “Government schemes need to be more successful. For instance, if we see Kisan Bima Yojana, there is a lot of difference in intent and reality.”

Rajput agreed that the farmers are the most unhappy lot.

Aggarwal said in the earlier economic plans, focus was on agriculture, then there were agriculture reforms, and then came the agriculture revolution. “But the Congress or the BJP, the NDA or the UPA have only been paying lip service in improving farmers’s condition. There have been a lot of schemes and loan waivers but no serious agriculture reforms,” he said.

Raju said the foreign agencies’ might be seeing India as a market primarily. “We should boost our exports. That will help the aam aadmi,” he added

Rajput said FDI has not helped the common man, shopping malls have increased, but the life in the villages continues to be dreary.