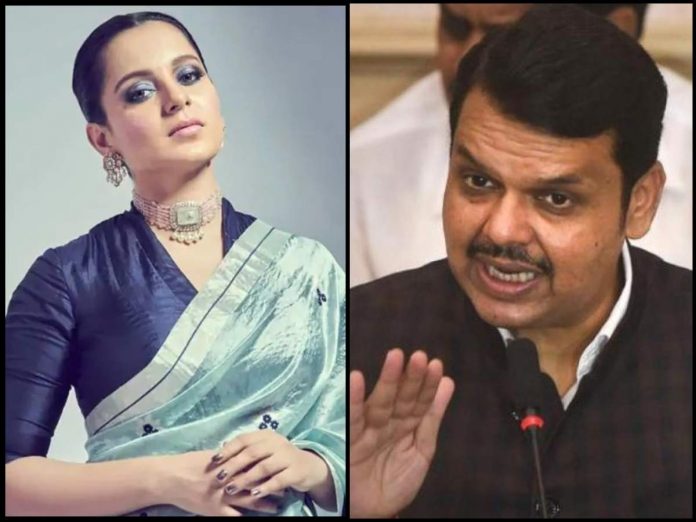 Former Maharashtra Chief Minister Devendra Fadnavis on Friday said actor Kangana Ranaut should not have said Mumbai fells like Pakistan-occupied Kashmir. Speaking in Patna, Fadnavis said Mumbai is a city of dreams and cannot be dismissed as PoK. He is the first BJP leader to find fault with Ranaut’s statement on Mumbai.

On other issues, Fadnavis supported Ranaut against the Shiv Sena-led government’s actions. He said the government of Uddhav Thackeray should focus on the rapidly increasing Covid-19 cases instead of fighting with Ranaut.

Fadnavis had earlier said the Thackeray government would not dare to demolish underworld don Dawood Ibrahim’s house, but was keen to demolish the actor’s house. He said Maharashtra is the most affected state by the coronavirus pandemic with 40 percent deaths in the country and should deal with it instead of being obsessed with reacting to the actor.

Nationalist Congress Party chief Sharad Pawar said on Friday that the state government had no role to play in the demolition of Kangana’s office, the decision was made by the Brihanmumbai Municipal Corporation. The Mumbai civic body was also following its rules and regulations, he said.

On Thursday, the Bombay High Court stopped the demolition of Kangana Ranaut’s Pali Hill office and will hear the case again on September 22.

Kangana Ranaut had tweeted that she was afraid to live in Mumbai and compared the country’s financial capital to PoK. Prior to her return to Mumbai, Ranaut thanked Home Minister Amit Shah for granting her Y-Plus security.