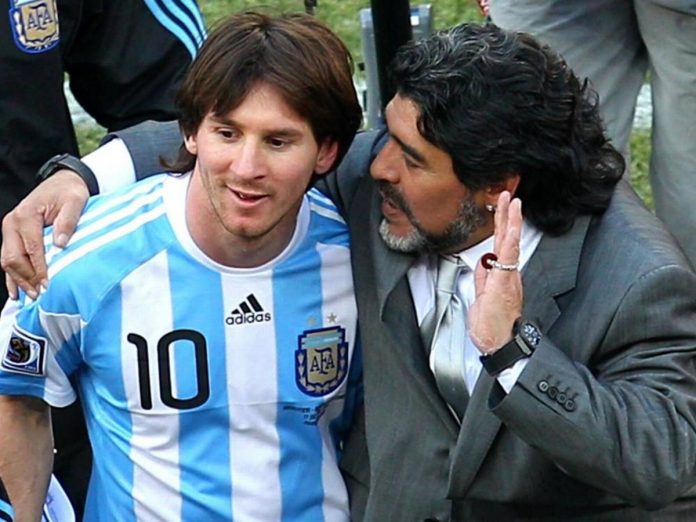 Argentina captain Lionel Messi has expressed sadness over the death of his former coach Diego Maradona, who died following a heart attack on Wednesday following surgery to remove a blood clot from his brain. Taking to Instagram, Messi said the passing away of Maradana was a sad event for the beautiful game. He said Maradona is leaving us but not going because he is eternal. While offering condolences to family and friends of the late footballer, Messi said he will cherish his memories forever. Messi was part of the Argentina team that played the 2010 World Cup under Maradona’s managership in South Africa.

The 60-year-old, considered as one of the greatest footballers in the history of the game, had undergone surgery recently for removal of a blot. He was discharged from the hospital following the surgery. However, he died after suffering a heart attack on Wednesday. The Argentinian football legend was part of the 1986 World cup winning team of Argentina. His famous Hand of God goal in the quarterfinal which knocked England out was voted as Goal of the century.

His death sent the football world into mourning with many taking to their social media accounts to express their sadness. Cristiano Ronaldo said he was bidding saying to a friend, while the rest of the world was saying goodbye to an eternal genius. Brazilian soccer legend Pele too mourned Maradona’s death and said we will kick the ball one day in the sky above.

BCCI chief and former Indian captain, who has been a big admirer of Maradona, said his hero is no more. He said he watched football only for Maradona. Indian captain Virat Kohli also posted a tribute message for the legend and said he changed the way football is played. Bollywood star Shah Rukh Khan said Maradona made the game of football even more beautiful.

Argentina has announced a three-day period of national mourning to mark the footballer’s death.