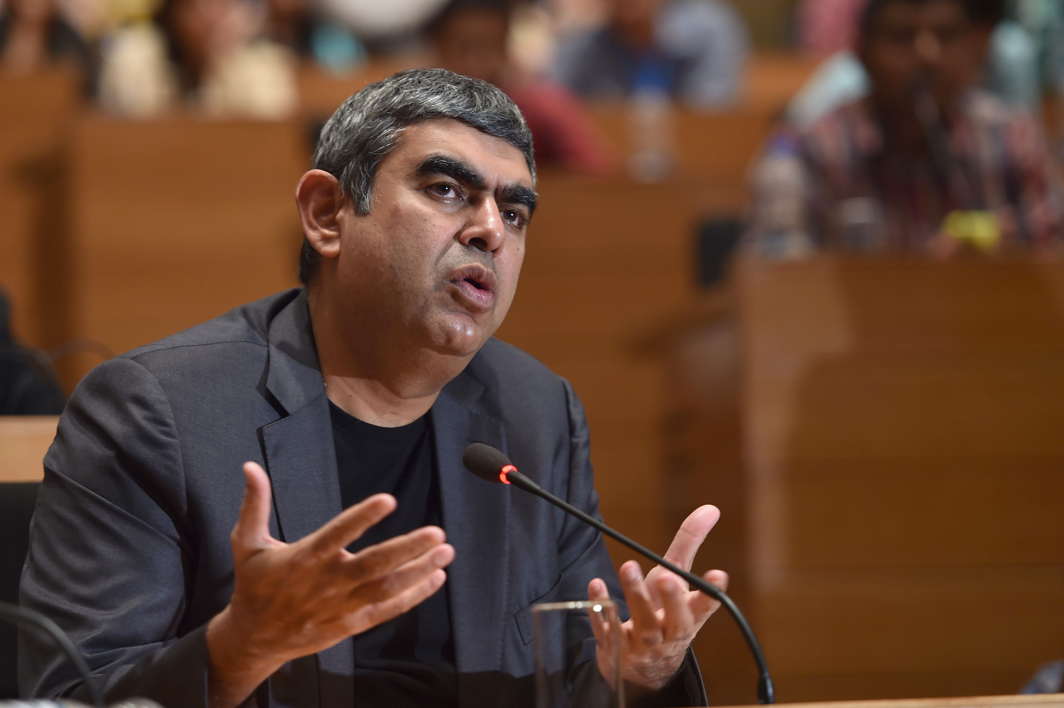 UB Pravin Rao takes over as interim CEO. Sikka, who will stay on as executive vice-chairman of the company for the transition period, claimed in his resignation letter that “Over the last many months and quarters, we have all been besieged by false, baseless, malicious and increasingly personal attacks.”

In a major development that is certain to be the talking point in India Inc for several days to come, Vishal Sikka resigned from the post of chief executive officer and managing director of Infosys, on Friday citing “ditractions, public noise and and untenable atmosphere” as the reason for his sudden decision.

The company’s chief operating officer, UB Pravin Rao, has been appointed interim Chief Executive Officer and Managing Director. Rao will report to Sikka for now who has agreed to stay on as executive vice chairman for the period of transition during which he will continue to focus on strategic initiatives, key customer relationships and technology development. Sikka will report to the Infosys Board for this period.

A statement issued by Infosys soon after news of Sikka’s resignation broke said that the new permanent Chief Executive Officer and Managing Director will take charge “no later than March 31, 2018.”

Sikka had taken charge as the first non-founder CEO of the company in 2014. However, his tenure during the past year had been marked by slower revenue growth and a constant tussle between him and Infosys founders over their respective visions for the company and how its operations should be managed.

Though not totally unexpected, the tenor of Sikka’s resignation letter was one that made known his anguish about the goings on in Infosys.

“Over the last many months and quarters, we have all been besieged by false, baseless, malicious and increasingly personal attacks. Allegations that have been repeatedly proven false and baseless by multiple, independent investigations. But despite this, the attacks continue, and worse still, amplified by the very people from whom we all expected the most steadfast support in this great transformation. This continuous drumbeat of distractions and negativity over the last several months/quarters, inhibits our ability to make positive change and stay focused on value creation,” Sikka is learnt to have said in his resignation letter.

He, however, also noted that: “I will be working closely with Sesh (Infosys Board chairman R Seshasayee), Ravi (co-chairman Ravi Venkatesan), Pravin, with all of you, and the senior management team to plan out the details and the timelines to ensure a smooth transition and in the meantime, continue our work without disruption, and ensuring that we protect our company, the employees, the clients, and the interests of every shareholder. You can count on my commitment to this.”

Sikka’s comments about the “malicious and personal attacks” appear to be aimed at Infosys co-founder NR Narayana Murthy. For several months now, Murthy has been raising serious concerns over the company’s performance under Sikka. Murthy had reportedly red-flagged issues like the high salaries being drawn by senior executives of Infosys, including Sikka and the disbursement of huge severance pay packages to select departing employees – something that the co-founder had speculated was “hush money to hide something”.

Hours before Sikka’s resignation, a business newspaper had carried a report about an email Murthy had written to his advisors doubting the ability of Sikka. “All that I hear from at least three independent directors, including Mr Ravi Venkatesan (co-chairman), are complaints about Dr Sikka. They have told me umpteen times that Dr Sikka is not a CEO material but CTO material. This is the view of at least three members of the board, and not my view since I have not seen him operate from the vantage point of an Infosys board member,” Murthy had been quoted as saying.

There are speculations that this latest not-so-veiled attack by Murthy was what triggered Sikka to put in his papers. Hours after Sikka’s resignation, the Infosys Board in fact came out with a statement that categorically blamed Murthy’s “dictatorial” ways for the top executive’s exit.

Officially though, the company was all praise for Sikka’s contributions to Infosys. Seshasayee was quoted as saying: “Vishal has made a seminal contribution to the transformation of Infosys, and he will be remembered for infusing a refreshed sense of direction, purpose and energy in the organization. His vision for the future of the industry and the Company will remain a strong reference point as we chart the future course for Infosys in this new era in our rapidly evolving industry. On behalf of our entire board of directors, I wish him well for the future.”

However, shortly after, Sikka sent a letter to his staff titled ‘Moving On’ in which he says: “After much contemplation I have decided to leave because the distractions, the very public noise around us, have created an untenable atmosphere. I deeply believe in creating value in an atmosphere of freedom, trust and empowerment. Life is too short to engage in battles of opinions in the public, these add no value, take critical time and focus away from the business, and indeed add more to the noise, to the eardrum buzz, as I wrote to you a few months ago.”

The letter which was also shared by Vishal Sikka on Twitter reads further: “I now need to move forward, and return to an environment of respect, trust and empowerment, where I can take on new lofty challenges, as can each of you.”