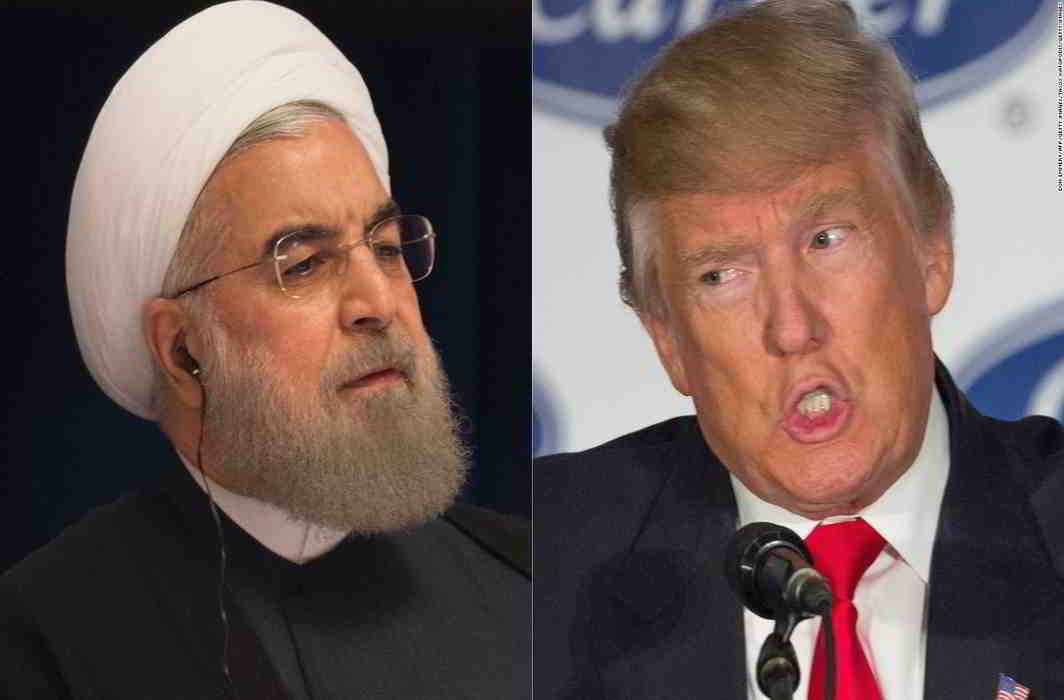 US and Iran differ apart in their views

US President Donald Trump and his Iranian counterpart Hassan Rouhani have maintained their positions intact on nuclear deal, spread of terrorism in the region and if Tehran regime was a “dictator” or most “democratic” establishment in the region. However, nuclear deal was the focal point, where both leaders shared their opinion on the “resolved but vexed” issue to the world community.

Donald Trump, on Tuesday addressed for the first time at UN General Assembly while Hassan Rouhani answered media quaries on the sensitive issues prevailing on the present US administration since January this year and even beyond: during the run-up for the Presidential elections. Both the leaders have expressed their views on situation in Syria, Iraq and other countries in the region.

President Trump spent almost ten percent of his 42,23 word-speech on Iran related issues, indicating that Iran is one of his priority areas in the US foreign policy. Trump chose to begin with describing the nature of the Iranian government as “corrupt dictatorship behind the false guise of a democracy” responsible for turning wealthy country into “an economically depleted rogue state whose chief exports are violence, bloodshed and chaos”.

He said that “longest suffering victims of Iran’s leaders are, in fact, its own people” while “its oil profits go to fund Hezbollah and other terrorists that kill Muslims and attack their peaceful Arab and Israeli neighbours.”

Trump has been actively involved in bringing Arab countries closer to Israel. His maiden foreign visit took him first to Saudi Arabia and then to Israel earlier this year. Now there is a proposal of starting direct passenger flights between Tel Aviv and Riyadh.

Then President Trump said, “We cannot let a murderous regime continue these destabilizing activities while building dangerous missiles, and we cannot abide by an agreement if it provides cover for the eventual construction of a nuclear program.”

He further said, “The Iran deal was one of the worst and most one-sided transactions the United States has ever entered into. Frankly, that deal is an embarrassment to the United States, and I don’t think you’ve heard the last of it. Believe me.”

Donald Trump, continuing his address to the world leaders at UN General Assembly, tried to gather international support to his Iran policy saying, “It is time for the entire world to join us in demanding that Iran’s government end its pursuit of death and destruction. It is time for the (Iranian) regime to free all Americans and citizens of other nations that they have unjustly detained.”

He demanded that, “Iran’s government must stop supporting terrorists, begin serving its own people, and respect the sovereign rights of its neighbours. The entire world understands that the good people of Iran want change, and, other than the vast military power of the United States, that Iran’s people are what their leaders fear the most.”  This is what causes the regime to restrict internet access, tear down satellite dishes, shoot unarmed student protesters, and imprison political reformers, he added.

Trump argued for the regime change in Tehran saying, “Oppressive regimes cannot endure forever, and the day will come when the people will face a choice. Will they continue down the path of poverty, bloodshed, and terror, or will the Iranian people return to the nation’s proud roots as a centre of civilization, culture, and wealth, where their people can be happy and prosperous once again?”

He reminded about his recent visit to Saudi Arabia and the commitment by a large number of heads of Muslim states for fighting against terrorism. He said, “The Iranian regime’s support for terror is in stark contrast to the recent commitments of many of its neighbours to fight terrorism and halt its finance, and in Saudi Arabia early last year, I was greatly honoured to address the leaders of more than 50 Arab and Muslim nations.” He said, “We agreed that all responsible nations must work together to confront terrorists and the Islamic extremism that inspires them.”

On the contrary, Iranian President Hassan Rouhani who has recently been re-elected for the second term in office remained busy with his scheduled meetings on Tuesday in New York. Most American media houses wanted to interview President Rouhani. However Iranian diplomats granted face-to-face interview to renowned CNN journalist Christiane Amanpour of Iranian origin and NBC News.

Rouhani also met with heads and editors-in-chief of several  media houses and foreign policy elites and interacted polite interaction on a wide range of issues.

He will address the UN General Assembly on Wednesday local time. New York is nine and half hours behind New Delhi time.

Reacting to Trump’s threat of exiting the nuclear deal, known as Joint Comprehensive Plan of Action (JCPOA), President Hassan Rouhani told NBC News, “The exiting of the United States from such an agreement would carry a high cost, meaning that subsequent to such an action by the United States of America, no one will trust America again.”

He further elaborated about the long diplomatic exercise culminating into the nuclear deal signed in 2015 saying, “Every word was analyzed many times by countries involved before its ratification, so if the United States were to not adhere to the commitments and trample upon this agreement, this will mean that it will carry with it the lack of subsequent trust from countries towards the United States because the greatest capital that any country has is trust and credibility.”

He clarified about Iran’s intention in case US withdraws from the nuclear deal saying, “We can easily go back to previous conditions if counterparts were to not live up to their commitments. But you do know fairly well that Iran will not be the initiator of this return to that path,” he assured. Moreover he dismisses the US apprehensions about probable nuclear weapons program saying, “So we will never go towards production of nuclear weapons, just as in the past we never intended to go towards that path nor did we ever. It has always been peaceful.”

During his meeting with Editors in-Chief of American media houses, Iranian President was quoted saying, “Therefore, whatever happens in the JCPOA, Iran is victorious. Of course, if the United States exits the agreement, it will suffer losses and if it stays, it will benefit. We are ready for any situation and we have no problem to continue our journey, but if the United States wants to withdraw its commitment, it means that the agreement is undermined, in which case, Iran may choose another way”.

Rouhani referred to the recent presidential election in Iran and said: “People’s turnout by 73% shows that Iran is run based on people’s will and democracy”.  He further said, “The attendance of 41 million Iranians at the ballot boxes was the best response of the Iranian nation to the threats of some countries and the words of Trump, and Iranians showed that they believe in their system and democracy and choose their officials at the ballot box”.

Iranian President clarified that the International Atomic Energy Agency (IAEA), the supervisory agency in all of its seven quarterly reports has emphasised that Iran has fully complied with its obligations. “Therefore if the US government breaks this obligation, it will bear all the losses and responsibilities and will show that Iran is a country that adheres to its obligations and that America is a country that no one can trust, because it may agree some day and, with the coming of another government, all those agreements will be violated”.

It would be rather useful to recall that George Bush-II had announced billions of dollars for promoting anti Tehran regime forces to overturn the Iranian government. Disturbances after re-election of Mehmoud Ahmedinejad in 2009 as country’s President were seen as part of the Washington strategy.

Syria and Iraq have also been matters of different strategies pursued by Washington and Tehran. Both governments claim of heir important contribution in fighting against IS and other terror groups in Iraq. However, US claims of supporting  to anti-Bashar al-Assad elements except IS in Syria. Russia and Iran support Bashar al-Assad regime in Damascus.