Home Latest india news Down but not out 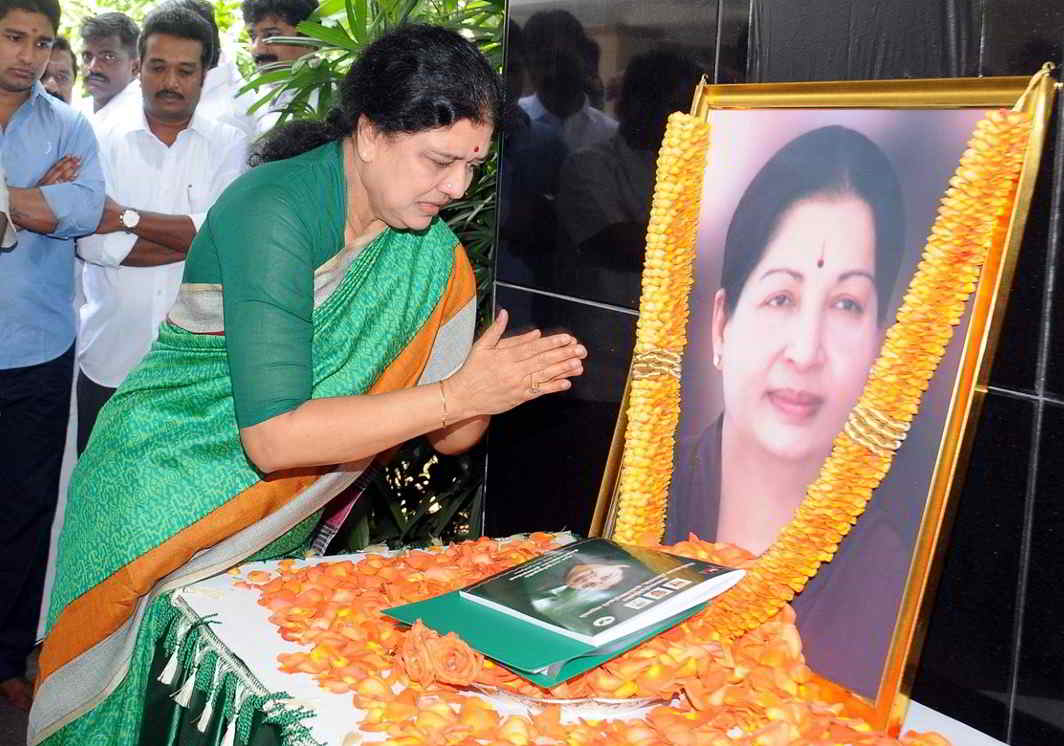 With the Supreme Court on February 14 sending chief minister aspirant Sasikala Natarajan and the late Chief Minister J Jayalalithaa’s relatives Sudhakaran and Ilavarasi to jail for four years each (they will be serving the remaining three years and six months), in the disproportionate assets case, one would have expected the path being cleared for O Panneerselvam, the acting CM.

But as it was seen, Sasikala has learnt her politics well from her friend and mentor. Sasikala will not only be in jail and pay a fine of Rs 10 crore (as would the others jailed), she will not be able to be in active politics for 10 years. This meant that if she did not act immediately after the verdict there was a huge possibility of the hawks, DMK and BJP, swooping down into troubled waters.

There was also the possibility, god forbid, of her so-called loyalist MLAs trooping over to the Panneerselvam lobby and forming government. That would have not only left her in jail, but also powerless to have any control of proceedings within the party and in government.

But not for nothing was she a close associate of Jaya for so long. She has learnt well. She decided that she would spend the night of February 13 at the Golden Bay Resorts in Kancheepuram, where her 128-odd loyalists had been interned. This was the masterstroke. If whispers are true, she had a fair idea of which way the judgement would go.

When the two-judge bench of the Supreme Court issued the damning verdict, the “huge number of south Indian TV and general reporters present within the packed courthouse virtually ran out to make their calls and file their reports”, says Vivek Kumar Singh, correspondent for APN, speaking to India Legal, APN’s sister concern.

Most were reporters, but some certainly were relaying the news to Sasikala.

Sasikala wasted no time. Immediately after the verdict she held a meeting with AIADMK MLAs at the resort and took some quick, critical decisions, which must have been talked through during the night. First, she expelled Panneerselvam from the primary membership of the AIADMK. Secondly, she chose her loyalist Edapadi K Palanisamy to take over as chief minister.

Edapadi later reportedly tweeted: “We have sent a letter to the governor and are awaiting his reply.” Governor Vidyasagar Rao is to take a decision soon.

And to nail it in tight, a fourth decision was to also fire from the primary membership of the party the handful of MLAs who had dared to oppose “Chinnamma”. That left no loose ends, so to say.

So what does Panneerselvam do? His dream of chief ministership has vaporised, virtually. Governor Vidyasagar Rao has no reason to call him for any floor test, unless there is a reverse exodus, again of MLAs, in which case there will be a constitutional reading into the issue.

More details were available at the popular debate show Mudda of APN. Senior Supreme Court lawyer Pradeep Rai said: “There is no other alternative for Panneerselvam than going to BJP. It is next to impossible that he will become CM. He may well continue as MLA, but will get disqualified later. For him, it is the beginning of the end.” On Sasikala, Rai felt that even if she has to go to prison as of now, she would get parole and, more importantly, continue to influence matters from inside the prison.

That underscores the point: Indian politicians don’t recede into retirement. They are often forced to fade away, sometimes with ignominy. However, one has to rediscover a face for AIADMK. That is the critical need.