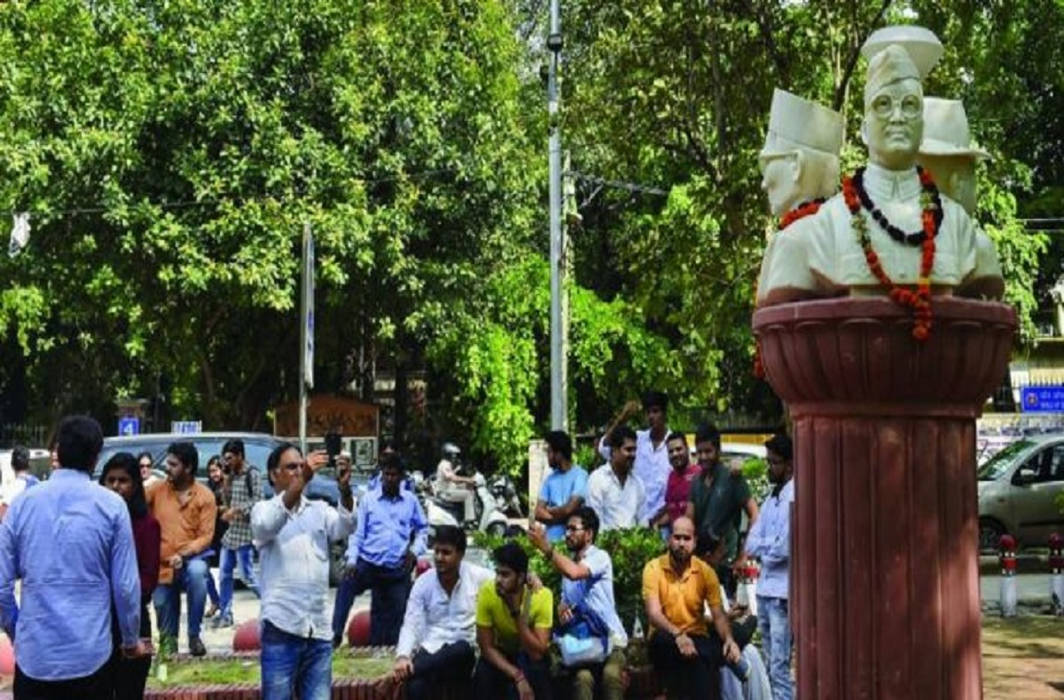 The Akhil Bharatiya Vidyarthi Parishad-led Delhi University Students’ Union has removed the busts of V D Savarkar, Bhagat Singh and Subhash Chandra Bose from the campus, the student outfit said in a statement on Saturday (August 24).

The student organization also claimed that the Delhi University has assured them that the busts will be reinstalled in accordance with the procedure after the DUSU polls are concluded.

On August 20, outgoing DUSU president Shakti Singh installed the busts of the trio outside DU’s Arts Faculty to “inspire the youth by their legacy and erase the false narrative spread against freedom fighters like Savarkar and Bhagat Singh.” Singh had confessed that the structures were placed without permission. “We took this step after the university refused our requests on the matter for over nine months,” he said.

However, they were removed on the intervening night of Friday and Saturday.

Also Read: Woman with a baby made of dough, tries to get govt scheme money

“ABVP-led DUSU has removed the busts of Veer Savarkar, Bhagat Singh, and Subhash Chandra Bose till permission is obtained from the DU Administration. The busts have been kept (at a) safe (place) by the varsity,” the RSS-affiliated outfit said in a statement.

The ABVP claimed that it had asked DUSU office-bearers to install the statues as per the procedure.

The students’ body also demanded “stringent legal action” against members of the Congress-affiliated National Students’ Union of India (NSUI) for allegedly blackening the bust of Savarkar on Thursday (August 22).

The ABVP said left-affiliated student organisations along with AAP’s CYSS and the NSUI had “stooped to a low level” and were harming the “the culture of debate and discussion, prevalent in the university”.

“ABVP strongly believes that the Left, AAP and the student organisations affiliated to the Congress should stop insulting freedom fighters to meet their trivial political interests,” it added.

Sidharth Yadav, ABVP Delhi’s State Secretary said: “It is very unfortunate that the DU administration turned a deaf ear to DUSU’s demand for installation of busts of freedom fighters, for a very long time. The university should restore these idols, as per their assurances, at the earliest.”

He also said that the behavior and acts of other student organisations reveal their real and degraded mindset towards freedom fighters, the repercussions of which they will face in the times to come.

Also Read: Man commits suicide while on a video call with his wife

“At the same time, Congress should understand that its ‘Kaalikh model’ is not going to hide the reality. We have decided to remove the busts because we don’t want to do politics over the name of freedom fighters,” he said.

There was no immediate response from the varsity officials.

Modi says India can never forget 26/11, Israel and the US pay tribute