Home Bihar election 2020 EC rejects allegations of EVM swapping after videos of the machines being... 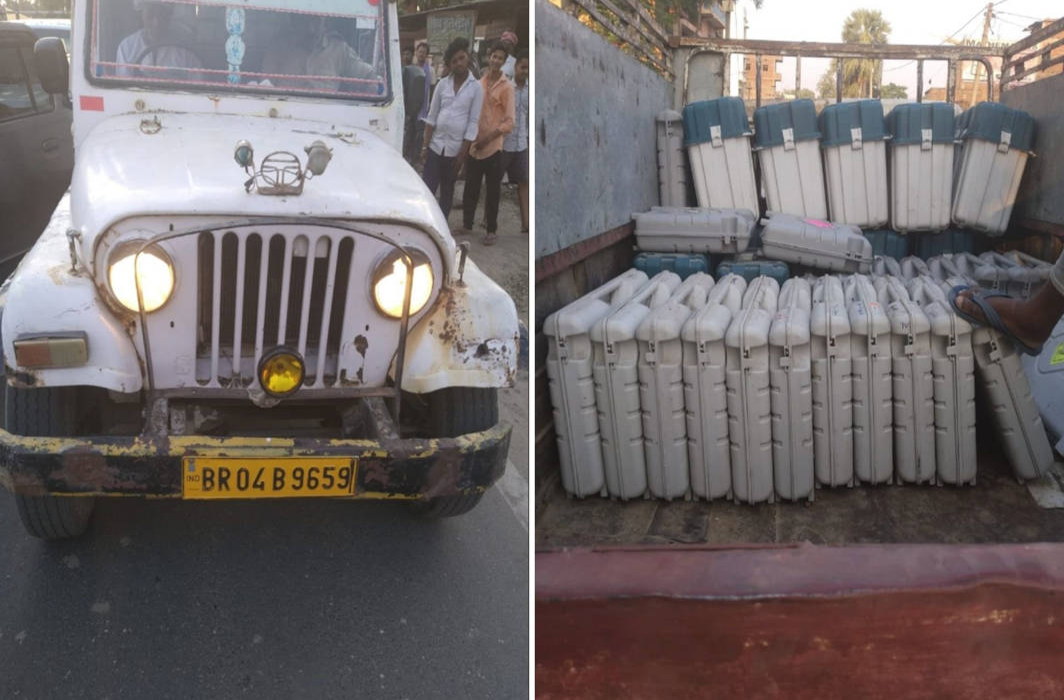 After the last phase of polling on Sunday, May 19, a number of videos surfaced showing Electronic Voting Machines (EVMs) being transported and alleging that they were being swapped with duplicate ones before the counting of votes on Thursday, May 23.

These came from parts of Uttar Pradesh, Bihar, Punjab and Haryana, with the Opposition raising concerns about possible manipulation of votes.

The fears would appear misplaced, however. A Twitter post pointed out that each and every machine has a unique number and the list of machines with their numbers is in the hands of every candidate.

A statement from the Election Commission (EC), strongly refuting allegations of EVM swapping, said that “before the counting of EVMs commences, the counting agents are shown the address tags, seals and serial number of the EVMs to satisfy themselves to the genuineness and authenticity of the machines used in the actual polls.”

Certain complaints of alleged movement of EVMs, purportedly to replace the polled EVMs in the strongrooms, have been doing the rounds in sections of media. Election Commission of India would like to emphatically and unambiguously clarify that all such reports and allegations are absolutely false, and factually incorrect. The visuals seen viral on media do not pertain to any EVMs used during the polls.

After the close of polls, all polled EVMs and VVPATs are brought under security cover to the designated strongrooms, which is sealed with double locks, in the presence of the candidates and in the presence of Observers of the Election Commission. The entire process of storage and sealing of the strongroom is covered under videography. Continuous CCTV coverage is done till completion of counting. Each strongroom is guarded with round-the-clock security by Central Armed Police Forces (CAPF). Further, the candidates or their designated agents remain present at the strongroom for 24X7 vigil at all times.

On the counting day, the strongrooms are opened in the presence of the candidates/agents and Observer under videography. Before the counting of EVMs commences, the counting agents are shown the address tags, seals and serial number of the EVMs to satisfy themselves to the genuineness and authenticity of the machines used in the actual polls.

The provisions and protocols have been explained to the political parties on multiple occasions including in several of the 93 meetings held with them at the Commission since announcement of elections. All Chief Electoral Officers and District Election Officers have again been advised to brief the candidates on the elaborate counting arrangements.

As can be appreciated, the detailed administrative protocols, security framework and procedural guidelines mandated by the Commission completely foreclose and pre-empt the possibility of any mischief or manipulation in the polled EVMs and VVPATs stored in the designated strongrooms under the 24X7 watch of the CAPF as well as the candidates.

The aspersions in clips being used in media merely pertain to the storage or movement of Reserve unused EVMs. However any case of lapse even in handling of Reserve EVMs is thoroughly investigated and disciplinary action taken against the officers responsible. An EVM Control Room 011- 23052123 will also be functioning at Nirvachan Sadan for handling any EVM related complaints till the completion of counting. This will become operative from 11am on 22.5.2019.

A senior official in Uttar Pradesh’s Domariyaganj reportedly tried to get an election body official to acknowledge that the transfer of EVMs was happening per their orders.

Amid the flurry of protests, former President Pranab Mukherjee, who had earlier congratulated the EC for conducting a ‘perfect election’ also tweeted his concern.

The EC sought to put the concerns at rest. The EC spokesperson put out a tweet:

In Uttar Pradesh, the Chief Election Officer stated that all EVMs used in the Lok Sabha elections are sealed in strong rooms under security. He added there was no possibility to change EVMs as he appealed to people not to panic, and to keep the faith.