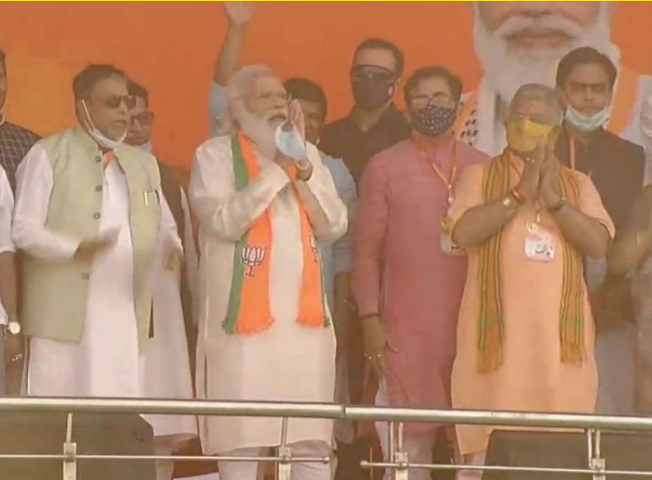 The Commission’s warning comes ahead of the fourth phase of voting in West Bengal on Saturday and after the completion of the polling in Kerala, Assam, Tamil Nadu and Puducherry.

Why has the Election Commission issued the warning?

The Election Commission flagged instances of star campaigners and political leaders not wearing masks while campaigning. The voting in the three states and one Union Territory ended on Tuesday. During campaigning, the massive crowds people have seen in rallies and road shows violating Covid-19 protocols. Even the top leaders and star campaigners were also seen and caught on camera violating Covid protocols.  The Commission’s letter pointed out instances of star campaigners and political leaders or candidates not observing Covid-19 protocols, including non-wearing of masks themselves at stage or while campaigning.

What does the Election Commission letter say?

In its letter to all state and national parties, the Commission said it takes serious view of the laxity in maintaining norms, particularly not wearing masks by political leaders on stage and it could ban them from holding rallies in case the situation does not improve.

In cases of breach, the Commission will not hesitate in banning public meetings, rallies and roadshows of the defaulting candidates/star campaigners/political leaders without any further reference. Taking note of the rising number of Covid-19 cases in the country, the poll body reiterated that the use of face masks, hand sanitisers, and thermal scanners was mandatory at all election-related events.

Why has the Centre been silent on rallies and roadshows?

The government blames the resurgence mainly on crowding and not wearing masks while the Centre has been largely silent on political leaders including the Prime Minister greeting lakhs of supporters, most of them not wearing masks, even this week despite the record surge in cases. Election rallies led by Prime Minister Narendra Modi, Home Minister Amit Shah and opposition leaders like Mamata Banerjee and Rahul Gandhi, as well as crowded festivals and religious gatherings, have characterized the record resurgence of the new coronavirus strains.

What is the Covid-19 situation in India?

The second surge has already been more powerful than the first, which peaked in September last year with 97,000 cases a day. On Friday, India reported 1,31,968 new infections and 780 deaths, the biggest daily increase in fatalities since mid-October. India’s overall caseload has swelled to 1.3 crore, the third-highest after the United States and Brazil – and total deaths to 1,67,642. India’s total number of infections has inched closer to Brazil’s 1.32 crore. An increasing number of states are imposing localized curbs, including night curfews in mega-cities such as Delhi and Mumbai since another nation-wide lockdown is not in the best interests of the country’s stagnant economy.